Cinco de Mayo: One cook shares her abuelita's recipes for a Mexican fiesta 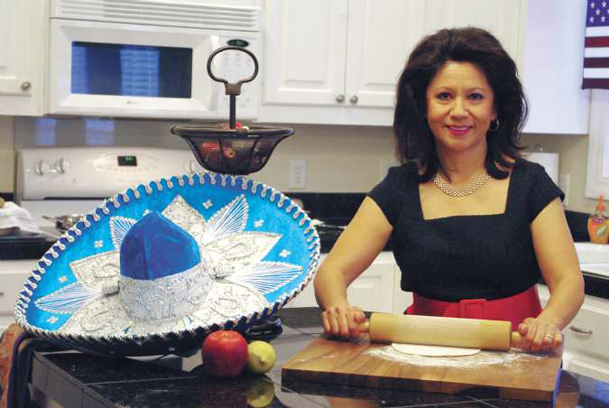 Patricia Wilson prepares tortillas in her North Columbus home. Today, she shares family recipes for a Cinco de Mayo dinner. Wilson is an avid cook, who took culinary classes in Europe and attends Viking Cooking School classes in the Delta, and elsewhere, as often as she can. Photo by: Kelly Tippett

"Everybody would be talking at the same time," laughed the eldest of six siblings. "Every night, when my father would come home from work, he expected us all to be there. I don''t know if you''ve been around people [of Mexican descent] much, but we tend to talk over each other, louder and louder."

"When I was little, my grandmother lived with us, and when my parents were working, she took care of me. She always spoke to me in Spanish, so that was my first language," shared Patricia, her voice vivacious and charmingly accented.

That wasn''t all her abuelita, as she called her grandmother, passed down, along with her mother and elder aunts. Patricia developed a love of cooking. Family recipes she can prepare by rote are carried in her head and heart, often used when preparing meals for her retired-military husband, Pat, a flight simulator instructor at Columbus Air Force Base, and social gatherings including garden club and bunco.

This enthusiastic cook loves a theme, and today shares some of her favorites recipes for Mexican cuisine, just in time for a Cinco de Mayo fiesta.

The United States in particular has adopted Cinco de Mayo (the fifth of May) to celebrate culture from South-of-the-border. Some erroneously equate it to our own July 4 Independence Day. While the date does commemorate the Mexican army''s unlikely victory over the French at the Battle of Pueblo in 1862, Sept. 16 is a much larger observance in Mexico, marking the 1810 start of the Mexican War of Independence from the Spanish. But none of that keeps enthusiasts from throwing parties the first week of every May, or simply trying their hand at a different cuisine for fun.

For a simple Mexican menu appropriate for the occasion, Patricia suggests chicken in green chili sauce, tortillas, Spanish rice, pinto beans and a dessert of bunuelos -- fried tortillas dusted with a cinnamon sugar coating. Her family''s recipes for these dishes are included.

"I do Mexican cuisine a lot. If I make something like a pork loin, I''ll do a recipe from whatever I have left over; that will turn into a Mexican dish," said the homemaker, who has lived in Columbus for eight years, and in California, Louisiana, Arkansas and Germany before that.

While living in Europe, including an extended stay in Italy, Patricia took as many cooking classes as she could find. Ever the student of culinary arts, she does the same here, attending Viking Cooking School classes and other workshops.

Now well-known as a fine cook and hostess, she''s come a very long way from those earliest days as a new bride, when, she admits with a chuckle, her mother-in-law finally had to pass on recipes for Pat''s favorite dishes, after a steady diet of tacos, burritos and enchiladas wore a little thin.

Talk of Cinco de Mayo spurs memories of her early home, and Patricia indulges in remembering that lively El Paso kitchen -- morning snacks of sweet breads and thick cafÃ© con leche, Sunday roasts that would yield dishes for several meals after, the special Mexican bread pudding made only at Easter ... laughter, love, la familia. The memories, the images, the recipes -- all part of a heritage she celebrates, and readily shares at this special time of year.

One 4-ounce can tomato sauce

One 12-ounce can tomatillos, drained