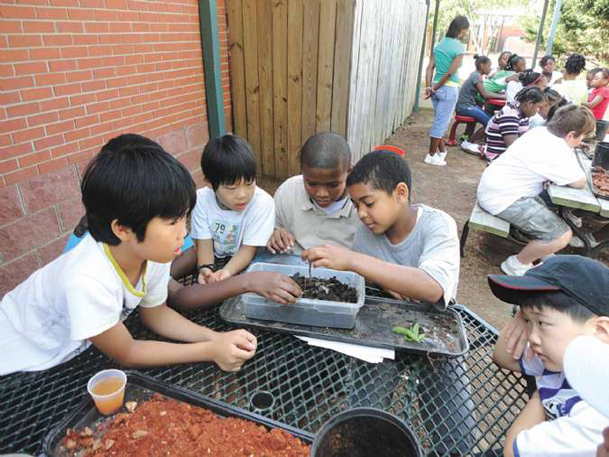 Students play with worms in the dirt during a farming lesson at âFun on the Hill,â a Starkville School District summer camp held at Henderson Ward Stewart Elementary. The camp began Tuesday and runs through July 7. Photo by: Jason Browne

Some kids have never had a fruit smoothie. It may never have occurred to them to sidestep the monotony of eating fruit by tossing it in a blender with some milk or juice and drinking it. They may have assumed the smoothies at McDonald''s are just a marketing gimmick to sell another cup of fruit-flavored ice cream.

Luckily, there''s a camp going on right now where kids can learn not only about fruit smoothies and other healthy foods, but also their origins and how to make them actually taste good (so they actually want to eat their veggies).

Fun on the Hill at Henderson Ward Stewart Elementary began Tuesday and runs through July 7. The program promotes health from 8 a.m. to noon. And there''s room for approximately 10 more kids to be exposed to healthy living, at no cost to the parents.

The camp bookends the morning''s activity with two healthy free meals. Breakfast is served from 8-8:30 a.m. and lunch from 11:30 a.m. to noon. In between, students spend 30 minutes learning about gardening, another 30 minutes in nutrition science lab (where they make their own goodies like smoothies and stir fry) and an hour of structured play in the gym or Discovery Zone Go Play playground.

"The purpose of the demonstration camp is to get students to come to summer feeding and eat and give them something constructive to do," said Beverly Lowry, child nutrition director for the Starkville School District. "With obesity rates the way they are, we thought if we focus on gardening, nutrition and P.E., maybe we can make a small difference in their lives."

Several grants from the U.S. Department of Agriculture made that difference possible. One grant provided $5,000 to fund the camp and two smaller $1,000 grants will provide gardening materials.

One of those $1,000 grants will go to HWS and another will go to Millsaps Career and Technical Center. But the two programs will cross over as the older Millsaps students will use what they learn in the future to mentor the HWS students. Millsaps has already built gardening racks to hold planters for the HWS garden since Lowry and the camp leaders hope to show children that a garden doesn''t necessarily equal a big patch of soil and mulch in the ground.

Watering even takes an outside-the-box twist as students will use rain water collected in big barrels donated by parents to water their plants.

Nancy Ashford, an SSD nurse and the Fun on the Hill camp director, said it''s fun to see kids react to okra or squash after tasting them for the first time, but the real meaning of the camp is more than simple enrichment. It''s about health.

"What really intrigued me and got me motivated to do this camp, I had three students between the age of eight and 11 with high blood pressure. Two taking hypertension medication," she said. "It''s becoming common in our society and I do not accept that."

Ashford said the camp isn''t about demonizing fast food or junk food. But it does teach discipline through moderation and portion control. And she knows the kids are listening because they''ve come back the first few days talking about what they learned the previous day.

Beyond the typical surveys, determining whether the first-year camp is making an impact on students'' health will be tricky. Body mass index, which Ashford does track in the students, is an unreliable determinant of health in many children. She only hopes the students are putting their parents on to what they''ve learned when they go home for dinner.

And it''s sounds as though they have.

Breland Robinson, a 7-year-old, said her mother has begun mixing more fruits into meals at home, as opposed to just vegetables. Austin Cherry, 11, immediately latched on to the fruit smoothie idea and has begun making his own at home.

Parents interested in including their children in Fun on the Hill can visit the SSD Office of Child Nutrition at Henderson Ward Stewart. Press the buzzer on the gate and someone will let you in.