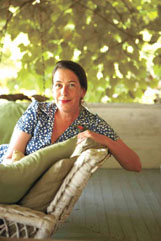 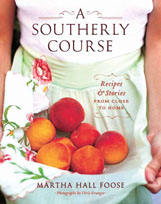 Fooseâs second cookbook continues her conversation with readers, blending narrative with imaginative updates to some Southern classics.
Photo by: Courtesy 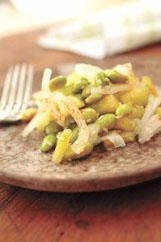 Maybe you''ve seen her on "Good Morning, America," or perhaps the "CBS Early Show." Or you may have read about her in Garden & Gun magazine this spring, or in any of the towering stack of glossy pages she''s graced since first writing her best-selling cookbook, "Screen Doors and Sweet Tea." But on Wednesday, June 29, the celebrated Martha Hall Foose will visit the Golden Triangle to share some Southern wit and kitchen wisdom.

The Friends of the Columbus-Lowndes Public Library and the Hitching Lot Farmers'' Market are bringing the Delta-based Foose to Columbus as the featured speaker of Table Talk, a weekly series of tasty topics in June.

Foose''s new cookbook, "A Southerly Course," is the much-anticipated follow-up to "Screen Doors & Sweet Tea," which won the 2009 James Beard Award for American Cooking, as well as the Southern Independent Booksellers Award.

"This book picks up where ''Screen Doors'' leaves off," said Foose by phone Monday, as she drove Mississippi''s roads, heading home to Greenwood after a three-state sweep of book signings farther south.

While the first cookbook invited readers into a homey kitchen filled with personal anecdotes and regional classics, "A Southerly Course" celebrates the "eccentricity, ingenuity and creativity" of our cuisine.

"With ''Sweet Tea,'' I really feel like I covered the cannon of Southern cooking," said Foose, a Mississippi native who began her cooking career as a pastry chef at the renowned La Brea Bakery in Los Angeles. After studying at Ecole l''Notre in Plaisir, France, she returned to the Magnolia State and founded Bottletree Bakery in Oxford and later served as executive chef of the Viking Cooking School in Greenwood.

In "A Southerly Course," the innovative Foose brings a new dimension to the table, with a blend of flavors and surprises -- like sweet pickle braised pork shoulder, mirliton or chayote squash stuffed with ham, shrimp and breadcrumbs, or a chocolate "Honeyboy Edwards" honey cake.

"There''s a soybean salad I''m just crazy for," Foose said of the new book, as she drove, "and some new interpretations and updates of classics like dirty rice and fresh water prawns, and some new ingredients. There''s one recipe called deviled tomatoes that''s so good -- tomatoes on top of toast, stuffed with bell peppers and spicy jalapeno jack cheese and bacon on top. It''s really yummy."

The spice of life

In true Foose form, each recipe comes with a story, and few practitioners can spin a yarn with such beguiling charm.

Former gourmet food store owner and restaurant general manager Anne Freeze of Columbus has heard the author speak at Southern Foodways Alliance gatherings and has attended one of her Viking cooking classes.

"She is funny, passionate and engaging when speaking," Freeze said. "She has a wonderful twinkle in her eye that says it all!"

A master storyteller, Foose shares herself in her narrative-driven cookbooks. She even introduces readers to friends and family. In "A Southerly Course," she dedicates a recipe for burgandy duck, for example, to a fiery group of women duck hunters called the Swamp Witches, while her cousin''s new wife inspires Korean-style grilled green onions.

"The stories surrounding the dishes are very important to me," stated the chef, who stresses the value of cooks collecting their own recipes and stories about their favorite dishes, "making sure family favorites get set down so they can go on to the next generation."

"A friend in central New York, who has backyard chickens, claims Martha Foose changed her life by explaining how to hard-boil an egg," Imes said. Her friend has even adopted one of the author''s more, um, unusual pastimes -- a cocktails-and-BBs-Hour.

"Enlightened and inspired by Martha''s BB Hour, my friend received her first Red Ryder for Mothers Day this year to shoot wine corks in her swimming pool," Imes added.

On June 29, Chef Foose will share insights on how storytelling and food are linked in the South, about collecting family recipes and inspiring stories.

"And we''ll talk about how you can learn a lot about a place and approach a lot of topics by talking about food," she added.

"I love Columbus. Several of my family and friends went to school there at the W; I just think it''s such a beautiful area," she said, chatting as the miles rolled past.

The program at the library located at 314 Seventh St. N. is free. Bring a lunch at 11:30 a.m. and enjoy socializing. Iced tea will be provided. Or come at noon for the talk. Cookbooks will be available for purchase.

"Martha Foose puts her Delta charm and wit in everyday Southern recipes. ... Why hasn''t someone thought of sweet tea pie before?" laughed Imes. "Her recipes make you homesick for Southern suppers, or wish you were raised on food this good."

Travel and food writer/editor Frances Mayes summed it up.

"I''d drive all the way to Mississippi if Martha Hall Foose invited me to her table. Such is the allure of her recipes and stories. Everything in ''A Southerly Course'' and in ''Screen Doors and Sweet Tea'' appeals to me -- the authentic Southern food (which is America''s best), the humor, the evocative photographs, and the strong sense of a place. Cookbooks should make you happy. This one bursts with memory and cheer."

One small onion, quartered and sliced