Side show: Add a bang to your Fourth of July with super sides

Grilled sweet peppers and corn on the cob hot off the grill are stand-out sides for a Fourth of July celebration. Think outside the traditional cook-out box with recipes from the pages of Bon AppÃ©tit magazine.
Photo by: Gentl & Hyers/Bon Appetit

Summerâs tomatoes are great with herbs and a few minutes on the grill.
Photo by: Craig Cutler/Bon Appetit 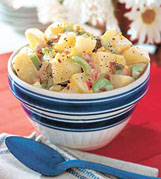 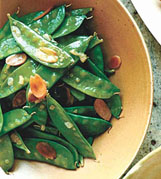 In light of our recent feel-good fascination with all things royal, there''s a footnote of irony to this year''s celebration of independence from Britain''s rule -- but that''s what 235 years, and a fairytale wedding, will do for you.

Make no mistake, however: The Fourth of July is America''s holiday -- our red, white and blue birthday. The long weekend ahead will be marked by cook-outs, fireworks, concerts and parades all across this young country.

In our neck of the woods, grills are being prepped for barbecue, burgers and steaks. How about letting the grill do double duty, with some great side dishes to accompany your main attractions? Two recommended by Bon AppÃ©tit magazine are grilled sweet peppers and corn on the cob, and charred tomatoes with herbs.

Corn on the cob, hot off the grill, never fails to impress. And it''s easy to do.

Start with the freshest, just-ripe ears of your favorite variety. The best are usually found at local farmers'' markets or produce stands. If buying at the grocery, remember the husks should be bright green and fit snugly around the ear of corn. Kernels, plump and milky, should be in tight rows, right to the tip of the ear, says whatscookingamerica.com.

For cooking in aluminum foil, remove all the husk and silk from each ear. There are two schools of thought on soaking corn on the cob before cooking. Some people prefer it, to add extra moisture for cooking and to steam the kernels inside the foil. If you decide to soak, before wrapping in foil, place shucked ears in a pot of cold water for about 20 minutes. Be sure ears are completely covered with water. When finished, shake off excess water before wrapping in aluminum foil.

Preheat the grill to medium (350 degrees). Place each ear diagonally on a square of foil and brush the kernels with olive oil. Elevate your Independence Day corn by adding a little garlic, chopped onion, nutmeg, salt and black pepper. (Or you may want to try cilantro and oregano.)

Roll and close up by twisting each end of the foil and place on the grill. Let the corn cook slowly for 15 to 20 minutes, occasionally rotating each ear. Don''t overcook, or your corn will get mushy. (If you prefer to cook corn in its husk, instructions at sites like whatscookingamerica.com can help.)

Charred tomatoes can add pizzazz to any Fourth of July table. Tomatoes at their peak of flavor need only fresh herbs, a drizzle of olive oil and a few minutes on a hot grill.

Not everything, of course, needs to see the grill. Potato salad is a tried-and-true favorite; but no need to serve the same-old, same-old. Drizzling sweet pickle juice over warm spuds is the secret to Bon AppÃ©tit''s State Fair potato salad. And, rather than the expected baked beans, serve snow peas with toasted almonds for a refreshing culinary coup.

Whatever the menu, wherever the celebration, maybe this is the perfect occasion to invite over the new neighbors, the single friend, the senior who might be spending the day alone. When it comes to enjoying life, liberty and the pursuit of happiness, share the bounty of a fabulous Fourth.

Four large firm heirloom tomatoes (about 10 ounces each), cored, cut horizontally in half

Nine large ears of corn, broken in half