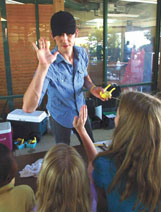 A âhatchlingâ Leathers carved at the West Point Farmersâ Market emerges from a cantaloupe shell.
Photo by: Kelly Tippett 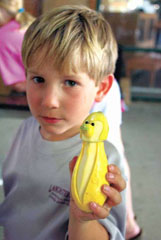 A cantaloupe cat was another of Leathersâ food sculptures at the Market.
Photo by: Kelly Tippett

Don''t bother telling David Leathers not to play with his food. He can''t help it. And, in this case, that''s a good thing. The Fulton native has turned his infectious enjoyment of food into a career as a food sculptor and chef.

As adept at entertaining as he is at carving, Leathers captured the attention of visitors to the West Point Farmers'' Market June 30. Under the pavilion at Mossy Oak on Highway 45 Alternate, the owner of Food Stylin in Tupelo deftly turned cantaloupe into cats and birds and squash into monkeys.

Along the way, he delighted some of the youngest market-goers, demonstrating that "food is art." Leathers is on a mission to also show elementary school-age kids the light about healthy eating. He makes appearances at schools nationwide, emphasizing healthier alternatives to junk food and teaching children hands-on culinary skills they can absorb at almost any age.

Robin Perry of West Point is a caterer, bartender and cake and cupcake designer.

"It was great to see someone be so artistic with food. Food is one of my many passions and his craftsmanship was amazing," Perry said. "He was wonderful and very interactive with the kids, which made his performance even better."

Of the West Point appearance, Martha Allen of the West Point/Clay County Growth Alliance and Farmers'' Market remarked, "It was very successful! We had a good crowd of children, young adults and adults."

Six-year-old Davis Lancaster was in the West Point audience. His parents, Eric and Anne Lancaster, own Lancaster Farms in Starkville and are regular market vendors.

"My favorite was the monkey," Davis said of the carver''s menagerie. "I got to keep it," he added. When asked if he thought he might like to be a food sculptor one day, he answered, "I think I would do that."

Leathers'' own best memories, he says, come from growing up and helping in the kitchen of his parents'' restaurant in Fulton.

At 18, he attended culinary school in Pennsylvania, graduating valedictorian of his class. He went on to study at the Andy Mannhart Academy in Luzern, Switzerland. An outgoing personality and passion for cooking and carving make him a natural for TV appearances, such as on TLC Extreme Food. He''s also made three instructional DVDs on the subject of carving. (Check them out at foodstylin.com/products.)

His most time-consuming projects at hand revolve around production of a children''s cooking show called "I Play with Food," expected to air on PBS this fall.

"Right now, my favorite foods to work with are cheese and tallow," Leathers shares on his web site. (Tallow is a hard, fatty substance from rendered animal fat.) "My favorite fruit is watermelon." His creativity doesn''t stop at vegetables and fruit; he''s also carved in ice, chocolate and butter.

"A carving will last for three to four banquets, as long as you take care of it," says the sculptor. "Picking under-ripe fruit will help it to last," he adds, as a tip.

Of course, Leathers'' talents don''t stop at artistic food presentation. The 30-year-old also adds a special touch to recipes for everything from granola to haute cuisine. Included today are some of his suggestions for simple, healthy ways to get your day off to a good start.

One egg, preferably free-range or organic