Not your mama's grits: Southern staple stars in upscale recipes 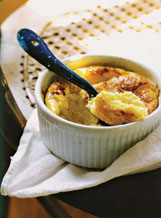 Grits. No, we don't mean Girls Raised In the South (though I'm certainly proud to be one), or the Christian hip-hop artist GRITS, the Liberal Party of Canada, known as GRITS, or even Kid Rock's first album, "Grits Sandwiches for Breakfast."

We mean, of course, that Southern staple, that maize-based porridge every self-respecting G.R.I.T. (the Girls) should know how to whip up -- and not the instant kind, either.

We can thank the Native American tribes of the Southeast for this crushed corn mainstay, sometimes called sofkee or sofkey, from the Muskogee language.

Southerners tend to be a bit proprietary about this signature food, and no real surprise. According to Wikipedia, three-quarters of all the grits sold in the United States are sold in the "grits belt," from Texas to Virginia. Why, Georgia even went so far as to declare grits their official prepared food in 2002. Similar bills have been introduced in South Carolina.

Grits are really nothing more than coarsely-ground dried corn. (Ground finely, it's corn meal.) In their most basic comfort-food form, they could hardly be more simple to prepare. Boiling water will get you there. Just cook on low to medium heat, following directions on the box and stirring as you go.

Seasoned with salt, pepper and butter, they marry perfectly with eggs, bacon, ham or sausage in a down-home breakfast. But to limit their role to the morning meal is short-sighted. We've gathered some recipes today that can elevate the grits repertoire. Even your tried-and-true shrimp and grits may benefit from reading Paula Deen's version with tasso ham, onions, leeks and green peppers.

And then there are grits. Cookbook author Martha Foose, who recently made an appearance at the Columbus-Lowndes Public Library for Table Talk, notes that there are several good stone-ground artisanal grits available that boast superior flavor. And, she adds, "It's always good to help the little guy." Foose likes Anson Mills' product.

Her cheese grits casserole recipe, from her book "Screen Doors and Sweet Tea," made with cheddar cheese, eggs, garlic and hot pepper sauce is included today. It can be assembled the day before, refrigerated and baked the next day. (Add 20 minutes to the baking time.)

Whitney Miller's shrimp and sausage with grits soufflÃ© is also in today's pages. Miller of Poplarville won the first season of MasterChef and shared her expertise in the June 2011 issue of Self magazine, saying, "My upscale version of shrimp and grits is made with pan seared shrimp, andouille sausage and roasted corn fresh off the cob." The grits soufflÃ© is surrounded by a yellow pepper sabayon, which is the French name for a thick, creamy sauce. This takes a little time to prepare, but is purported to be absolutely mouth-watering.

Grits. They aren't just for breakfast any more.

20 medium to large shrimp, peeled and deveined, with tails on

(*Tasso is a Cajun ham, often hard to find outside Louisiana. May substitute salt pork, pancetta of prosciutto, but you'll have to beef up the seasoning, as tasso is very flavorful.)

GRITS WITH CORN AND ONION GREENS

1 cup whole corn kernels, either frozen or freshly cut from the cob

SHRIMP AND SAUSAGE WITH GRITS SOUFFLE

For the shrimp and sausage:

8 ounces andouille sausage, cut on the diagonal into 1-inch slices