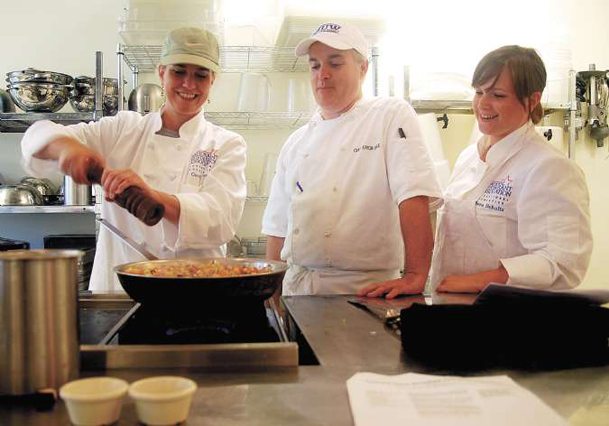 Carol Dowdy seasons a dish of ratatouille as Chef Erich Ogle, director of Mississippi University for Womenâs Culinary Arts Institute, and Tiana Schultz look on. Dowdy is culinary arts instructor at McKellar Technology Center in Columbus. She and Schultz were among 30 high school culinary arts educators at the ProStart Institute held at MUW July 25-29. Photo by: Luisa Porter

Chef Greg Beachey of Chicago, left, and Chef Grady Griffin of Jackson evaluate appetizers created by participants in the ProStart Institute at Mississippi University for Women. Beachey is the ProStart national program director. Griffin is director of education for the Mississippi Hospitality Restaurant Association.
Photo by: Luisa Porter

Rice-wrapped âtreasure pursesâ stuffed with shrimp and clam, and served with hoisin sauce in clam shells, were prepared by Dowdy and Schultzâs team in Fridayâs timed exercise.
Photo by: Luisa Porter 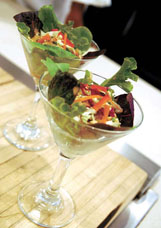 This Vietnamese bahn style salad with calamari and frog legs was another creation by the ProStart teams.
Photo by: Luisa Porter

Teachers were, so to speak, on the other side of the desk Friday, as a week of culinary training came to an exciting conclusion at Mississippi University for Women.

Thirty high school educators completed the first ProStart Institute for culinary arts instructors ever held in Mississippi. ProStart is the National Restaurant Association Educational Foundation''s two-year program designed to develop the best and brightest high school students who have an interest in restaurant and foodservice management.

"It was an amazing week," said MUW Culinary Arts Director Chef Erich/Ogle. "I know everyone that came really enjoyed themselves."

The institute hosted 20 Mississippi teachers and 10 from nine other states, including New York, Wisconsin, Wyoming and Kansas, noted Grady Griffin, director of education for the Mississippi Hospitality Restaurant Association in Jackson.

After an intense week of training with Chef Ogle and guest instructors, the teachers are better prepared to advance the ProStart program in their own classrooms. The session provided a current overview of the restaurant and foodservice industry and focused on topics including food safety, workplace safety, kitchen essentials, stocks/sauces/soups, communication and management essentials.

On Friday, educators capped their week with an exam -- and then donned aprons for their own version of an "Iron Chef"-style challenge.

Divided into teams of five, participants were given 90 minutes to create an original appetizer that would impress evaluators Ogle, Griffin and Chef Greg Beachey of Chicago, ProStart''s national program director.

Each group also had to incorporate two "secret ingredients."

"Teams were given a list of four ingredients only the afternoon before; they had to choose two from that list, and then they could use whatever else was available in the kitchen to make an appetizer that would yield two portions," explained Ogle.

The good-natured competition was "healthy."

"It got to really be creative and was a chance to show everybody what they''re made of," Ogle remarked. Based on taste, originality, presentation and quality, the trio of chefs gave the nod to a spring roll-wrapped shrimp salad over an Asian slaw, said Griffin.

"The whole purpose of that exercise was to have the instructors going through the same critical thinking and anxiety-filled situation of a small window of time to prepare a dish," he continued.

High school students advancing to local and national ProStart competitions will face the same pressures, and then some, as they represent their states and compete for scholarships.

"It''s a very valuable lesson for the instructors to put themselves in that same process," Griffin added.

From 2009 to 2019, the number of jobs in the restaurant and foodservice industry is projected to increase by 1.8 million, according to the National Restaurant Association Educational Foundation. That includes 11 percent growth in management positions.

At the end of the two-year ProStart program, graduates have a solid foundation for future careers and receive ProStart national certificates of eligibility to earn special scholarships and college credits.

"ProStart has been in place in Mississippi for nine years," said Griffin. "We began as a pilot program through vocational education with five schools. Two curriculum re-writes later, Mississippi now enrolls over 1,000 students in 35 schools across the state."

One of those is McKellar Technology Center in Columbus..

McKellar Culinary Arts Instructor Carol Dowdy said, "The knowledge and experience students gain is just invaluable to them in the industry," noting that those who have been through the program usually leap to the top of applicants'' lists when job hunting. "They''ve already studied things like workplace safety, customer service, food preparation, and they also already have knowledge of commercial equipment."

The program is a definite leg-up, too, for McKellar graduates applying to college-level culinary programs.

There are three levels of ProStart Institutes for culinary educators.

"This year we did Level I at MUW, but I hope to in future years do Levels II and III," said Ogle.

In 2010, MUW signed an articulation agreement with the National Restaurant Association, which gives the university access to the Mississippi schools that offer the ProStart program.

"Having the ability to host in Mississippi is a win-win for Mississippi teachers in terms of their district and state education budgets, as well as being able to market the MUW Culinary Arts Institute to other ProStart teachers from across the nation," Griffin stated. "It allows MUW to show off what is truly a hidden gem."

Based on her first experience, Dowdy will be one of the first to sign up for the next session.

"We really had the best time," she enthused. "The camaraderie was just so much fun -- being with everyone, the exchange of ideas and team building. And now we have a network to draw from the whole year."