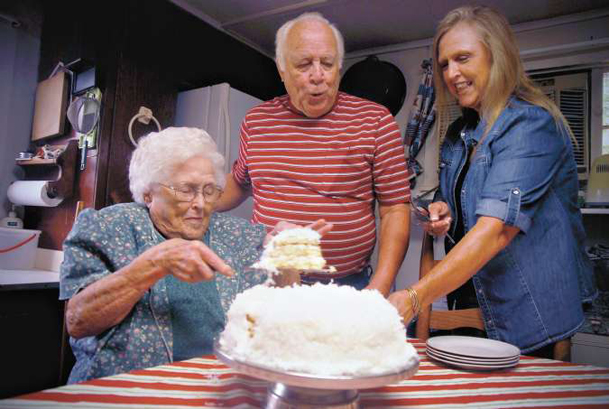 Lorene Thrasher, left, and her daughter-in-law, Glenda Thrasher, share memories about one of the many quilts Lorene has hand-stitched and given to members of her family.
Photo by: Luisa Porter

Mary Lorene Thrasher was born 94 years ago in a small sawmill camp across the Alabama line. She didn't have to venture far to find a full life. She's lived the past 65 years in the New Hope community, within a few miles' distance of where she was raised, where she milked cows twice a day, pulled potatoes and learned to make corn husk mops.

She never took up driving, but those scant miles were all she needed to meet and marry Robert Patton Thrasher, raise six strong children, dote on 14 grandchildren -- and grieve for the loss of three of them, as well as for her husband. Their legacy already embraces 27 great-grandchildren and 16 great-great grandchildren. Yes, within those few square miles, Mary Lorene Thrasher has loved and been loved, and learned life's most meaningful lessons. Saturday, she sat at her kitchen table, her spirited humor flying full mast, belying her years. A daughter, Angie Whitten, plus Thrasher's son, Buddy, and his wife of 53 years, Glenda, are with her. A gleaming bowl of green beans, fresh from the garden that morning, sits on the counter, replaced on the table by a heavenly coconut cake.

A lot of living has happened in this kitchen.

"This is where we did our visiting," the smiling senior says, echoed swiftly by her son's, "Lord, yes."

"We've had some of our best times around this table," grins Whitten. "And we've cured a lot of the ills of the world, but nobody listens but us."

When asked what she attributes her longevity to, Thrasher is quick to quip, "good, clean, hard living. I didn't dip, chew, smoke or cuss. My day started at 4 a.m. and ended when I got to bed, and that might be midnight or after."

Thrasher has been cooking since she was 8, and soon helped tend her siblings, father and her mother, who was sometimes ill.

The good earth provided for them, as it did for most self-sufficient families willing to work the land.

"I just learned to cook the food we raised," she reminisces. "We had almost everything we needed -- cows for milk and butter; raised our own hogs, vegetables, made our own cornmeal, had chickens for eggs and (meat), raised our own potatoes ... "

She remembers first cooking on an open fire, then a wood stove.

"Then I tried an oil stove," she grimaces. "I gave it a week. I told my husband he wasn't getting anything else to eat until he got me a different stove!" she laughs.

"Oh, I remember that stove," Buddy interjects. "The kerosene was terrible!"

"Mama never knew how many or who might show up to eat, but she always had plenty," remarks Whitten, bragging in particular on her parent's chicken and dumplings and fried pies. "And she dried her apples out in the sun."

Glenda Thrasher, who would eventually marry into the family, was one of those guests more than a half-century ago. She gives her husband a playful nudge Saturday, teasing that it was his mother's fried corn that finally won her over.

"She nurtured me," Glenda said of her mother-in-law. "When I married Buddy, I didn't know how to do anything. She mothered me, I'm tellin' the truth."

Even while tending her household, for a while in the 1940s, Thrasher worked outside the home, first at Seminole and then Beneke. Much later, she was a fixture for 10 years in the cafeteria at New Hope, where her children and many of her grandchildren attended.

"For years, there were Thrashers at New Hope. And when they got out, they replenished the school with little Thrashers," the family matriarch says with a grin.

This past spring found Thrasher busy with what she's done almost as long as she can recall -- putting in a garden.

The two-chair system worked for a while.

Thrasher explains, "I'd have me two chairs, one at each end of the garden. I'd sit down and rest a little while, then start down another row and then rest at the other end." But the tasks, and July's extreme heat, finally convinced her that, after 94 years, she can take life a bit easier.

"I just can't do it any more. So, I guess I'll just turn it over (to my children), and they can give me stuff out of it," she smiles.

As lively conversation circles the table, talk turns to December, when the family plans to observe the ritual Christmas Eve sleepover at Thrasher's house.

"We talk, whoop, holler and laugh all night," says Whitten. "Maybe have a glass of wine ... or even two," she winks. "And then get up on Christmas morning and have a huge breakfast."

"Santy Claus brings them to me for Christmas," grins her mother.

She'd be rich if she had a dollar for every meal she's ever cooked, says someone at the table.

Thrasher demures, "If I had a dollar for every one of 'em, I wouldn't know what to do with it."

Her riches instead have come in all shapes, sizes and ages. A loving family, nurturing neighbors and caring church family surround her.

"I've attended two of my children's 50th wedding anniversaries," she begins, in a clear, purposeful voice. "And if the good Lord lets me live, I have another daughter's 50th next July."

The big dinners are generally someone else's responsibility these days, but Thrasher is still self-reliant. She gives thanks for being able to still live on the land she and her husband settled in 1946, to be able to mark her 94th birthday there Thursday.

(Editor's note: A birthday celebration for Lorene Thrasher will be held Sunday, Aug. 14, from 12:30-2 p.m. at Beersheba Cumberland Presbyterian Church, 1735 Beersheba Road, in Columbus. All family and friends are welcome. No gifts, please.)

PLAIN OR ALL PURPOSE FLOUR CAKE

1/2 cup shortening or butter-flavored Crisco plus

3 whole eggs (except for a coconut or pineapple cake. For those, use one whole egg and three egg yolks. Save whites for seven-minute frosting, recipe follows.)