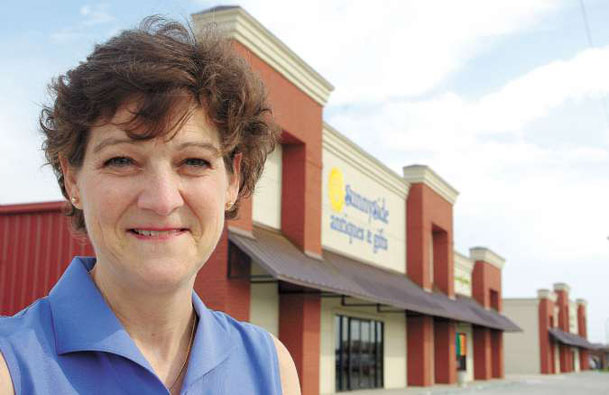 Elizabeth Schaffenburg is site manager at The Shops of Community Commons on Highway 45 Alternate in West Point. The four shops â Sunnyside Antiques and Gifts, Again and Again Books, Confections and Casseroles, and Arts from the Prairie â will provide employment opportunities for the agencyâs clients and proceeds to enhance CCS programs. Photo by: Kelly Tippett

Tina Bivens, retail clerk at Again and Again Books, is pictured in one of the comfortable seating areas inside the shop dealing in gently-read books.
Photo by: Kelly Tippett

The expansive Sunnyside Antiques and Gifts in The Shops of Community Commons holds a wide variety of period furniture and related decor.
Photo by: Kelly Tippett

When Elizabeth Schaffenburg unlocks the doors of The Shops at Community Commons in West Point each morning, she knows the day is going to be about much more than selling an antique armoire or a gently-read copy of a New York Times best-seller.

The site manager for Community Counseling Services'' new plaza of shops on Highway 45 Alternate, near Mossy Oak, is part of a team dedicated to providing employment -- and often a lifeline -- for those with developmental disabilities or substance abuse issues, who have turned to the nonprofit agency for help.

Proceeds from the stores go directly toward maintenance, upkeep and salaries. Anything beyond that goes toward employing more people and to enhancing Community Counseling programs.

"I thoroughly enjoy working with the clients; it''s a real joy," said Schaffenburg Wednesday, looking out over the expansive Sunnyside shop filled with antiques and decor, kept neat and organized by the former art history major and her helpers. "I think it''s all-important to lend (our clients) a sense of self-esteem, fortify their level of confidence. This gives them a real leg-up on dealing with day-to-day life."

Two down, more to go

Two of the complex''s four shops -- Sunnyside Antiques and Gifts, and Again and Again Books -- are now open for business. Two additional shops, Confections and Casseroles and Arts from the Prairie, should be open within six to eight weeks, something Schaffenburg and the rest of the CCS family are looking forward to.

In the meantime, everyone is busy getting yet another facility up and running just a few blocks away. The near 25,000-square-foot Pass It On thrift store, in the former Jitney Jungle location at 407 West Main, is scheduled to open Sept. 12. It even has a drive-through donation center.

"The unemployment rate is high anyway, and with the mentally-challenged, it''s much more," she noted.

The idea of retail as a win-win mechanism for clients, the agency and the public took root in 2007, when CCS opened a small antiques store (the original Sunnyside) in downtown West Point.

"We felt it would complement shops already in place, be a draw in the community, plus provide work behind the scenes for people with challenges," shared Baker, who works closely with CCS Executive Director Jackie Edwards. "They might help with tasks ranging from moving furniture to housekeeping or dusting."

When the opportunities surfaced to purchase at auction the Highway 45 Alternate property and the former Jitney Jungle building, CCS was able to substantially expand on the concept of self-supporting retail.

Sunnyside moved from downtown to its new, larger location at the Commons in May. Energies then went into getting the book store open in June. Next on the agenda is the Pass It On thrift store, followed by the two remaining shops at the Commons.

Confections and Casseroles will offer a community meeting place and a variety of sweets and refreshing drinks, plus frozen casseroles for busy families. Arts from the Prairie will provide a sales and display outlet for area artisans.

The initiative has already generated jobs for nine new employees. Baker anticipates at least 35 total when the shops are all open. CCS has also partnered with Ability Works in Columbus, to provide vocational rehabilitation training for individuals with disabilities who need assistance and support to re-enter the workforce.

Bibliophile Tina Bivens has landed in a reader''s paradise. She works at Again and Again Books, surrounded by neatly-stocked volumes from the Mary Holmes Community College Library and from generous donations from the public. (CCS acquired the Mary Holmes campus, which it utilizes as administration central for its seven-county area. It also makes several campus buildings and facilities available for public use.)

Bivens, a former nurse, has come through life''s lows, having battled substance abuse issues. She knows her work is helping her steer a better course.

"I love this job; I''ve always wanted to work in a book store," she said at the shop, where she willingly talks Stephen King to Kathryn Stockett with customers who revel in the latest book buzz.

"It caters to people who love the feel of a book, the smell of a book, people who want to turn those pages in their hands," she continued, chuckling over a tidbit she read about electronic-book users buying aerosol spray that makes their e-gadgets smell like the pages of a bound book. "What''s the point?" she laughed lightly, "when you could have the real thing?"

Those who want to donate books can receive a tax-deductible form from the 501(c)(3) agency, or receive 15 percent of the retail value of up to 10 books as a credit on new purchases.

"It''s a wonderful opportunity to donate books and get something for it," said Schaffenburg, whom Bivens praises, along with the rest of her CCS family, for their support.

"Everyone has just been very, very positive about the shops," noted Schaffenburg, a licensed but non-practicing attorney. She described a "constant flow of people donating books and people buying books" at Again and Again. And donations have been steadily arriving at the thrift store, Pass It On.

Baker remarked, "I think people are going to be pleasantly surprised at how nice it all really is; there really has been an astounding response."

Community Counseling has always been an agency that tries to explore different things, Baker added. "When I came here 17 years ago it was to build a children''s hospital in Louisville. It was unthinkable that a regional mental health center would have a hospital, but we did it."

Like that hospital, The Shops at Community Commons seem to be another achievement soon to be realized by CCS. Just another example of idea-building, strong teamwork and commitment. And there''s nothing at all "common" about that.