Canine heroes: Intelligent, courageous, all heart -- search and rescue dogs have what it takes 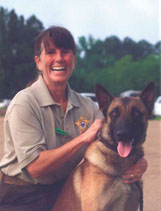 Kathy Doty of Columbus and her 20-month-old Belgian Malinois named âR.I.P. Digginâ up Bonesâ pause during the United States Police Canine Association Nationals in May in Brandon. R.I.P. placed second in the nation in Human Remains Detection competition. Doty, a volunteer, is deputized as a cadaver canine handler with the Lowndes County Sheriffâs Department. She founded the GTR K9 Search Team and is dedicated to developing search and rescue dogs, like those that saved lives and recovered remains after 9/11.
Photo by: Becki and John Johnston/Provided

"Check!" Kathy Doty commands, and R.I.P. is off in a blur of buff and black fur. The 20-month-old Belgian Malinois runs straight toward an agility ramp, his sensitive nose already on scent. He circles the wooden structure, sniffing continuously. In two efficient leaps, the dog is at the ramp''s apex, beading in on the "source," hidden there earlier by Doty. He gently touches the find with his paw, assumes the platz (down) position and makes steady eye contact with his human partner.

"He''s giving the ''indication,'' the sign he''s found it," explains Doty, his biggest fan. She moves forward to deliver a verbal "good dog," a welcome scratch behind the ears, and the ultimate prize -- an orange rubber octopus, R.I.P.''s favorite toy

His "mom" throws it far into the mown field at her home in rural western Lowndes County. Her good dog, who just found a short PVC pipe filled with human bone, is after it in an ecstatic flash. It''s the reward he''s been waiting for.

The affection in this partnership is obvious, and uplifting to witness. A cool, wet nose and sloppy dog grins can cure many ills. But the interaction has a very serious purpose, too. On an actual search, R.I.P.''s find could represent recovery of someone who''s been missing for a few weeks -- or many years.

"My dogs would go in looking for deceased people," she says. "Air scent dogs are trained more for live finds, like someone with Alzheimer''s who may have walked away, or someone who''s gotten lost in the woods."

The dog lover had begun training her first canine for search and rescue about a year before the tragedies of Sept. 11, 2001. Watching coverage of the tireless animals and handlers work among the devastation had a profound impact.

"Watching all those first responder dogs and cadaver dogs working 9/11 sites inspired me, because they were in there for months, going through the rubble," stresses Doty, who is usually found working at Biddy Saw Works, beside her husband, Buff.

Two of her dogs -- R.I.P. and Lakota -- are certified by the United States Police Canine Association. In May, R.I.P. excelled at the USPCA nationals, placing second in the nation in his HRD competition.

"That would not have happened without the support of the Lowndes County Sheriff''s Department," praises Doty, who is also certified under Mississippi''s Homeland Security Task Force. "We entered this event proud to represent our county, city and state."

As civilian volunteers, Doty and her dogs are often mobilized to work cold cases with law enforcement agencies.

"Between Mississippi and Alabama, we probably get called out to an average of six cases a year," she shares.

In addition to R.I.P., her other most active dog is Lakota, a 6-year-old female Malinois (pronounced ma-lin-wa) that has notably located the remains of a young man missing 23 years, and another missing three years in other parts of the state. As somber as the work can be, Doty is convinced of its importance.

"You really want to bring closure to a family and all of the loved ones any time you can."

Like their owner, the dogs are on call 365 days a year, eager to head wherever they''re needed. Most recently, that was to Smithville and to Tuscaloosa, Ala., with the Homeland Security Task Force II after April''s devastating tornadoes.

"My sleeping bag is always ready," says Doty. "We''re always prepared to sleep in the SUV, because if we''re going to a disaster zone, we don''t expect others to take care of us."

She usually goes out with two dogs. "Like people, the dogs get tired; we''re expecting their noses to do so much work," she continues. "This way, I can let one rest while the other works."

After more than a decade of training seminars and workshops, Doty does most of the work with her own dogs at home. Not every dog will have the aptitude or attitude, but with a suitable prospect, the process generally takes about 18 months. Requirements include intelligence, agility, perseverance, dedication and, above all, courage.

"We do follow a circuit of seminars in the fall; you can go for a week at a time. You''re in the field every day, learning all the ins and outs," the dog owner remarks. For the past three years, she''s been invited to be an instructor herself. She also helps, free of charge, with several local owners and their dogs, who are candidates for search and rescue work.

While she''s worked with gifted German Shepherds, Retrievers and Labradors, in her own kennels the breed of choice is the Belgian Malinois.

Often mistaken for German Shepherds, this alert, lighter-boned herding breed is hard-working, intelligent and well-suited for police or military canine units. (Doty was the first person in Columbus to have a Malinois, and the first in the state to have one certified for search and rescue work.)

For training sessions, her "sources" (of scent) are bits, small and large, of human bone or tissue.

A cadaver is not a requisite for training dogs for HRD, as some people might think. Instead, Doty is the recipient of some unusual "gifts" from others who know and support her mission.

When R.I.P. and Lakota discover a "find," they obediently signal Doty silently, as they''ve been trained. Yada, however, is another tale. Still inspired in part by events of 9/11, Doty is training this 1-year-old "puppy" to indicate finds by barking.

"I want to be certified with FEMA with one of my dogs, and FEMA dogs have to have a bark indication, because they''re usually working a disaster site, working in rubble or down in holes," she explains, smiling indulgently at the young female sitting in down position, contentedly devouring a fresh pear from a tree.

"She''s ready to be certified, she just needs some seasoning," Doty continues. " ... She''s still a little exuberant, but in a year she''ll be right at work and focused. A lot of the time, you''re working what you have to consider a crime scene, and you can''t have a dog running around all through it ... "

Doty and her dogs have worked in the past with Ken Morris and Neal Austin of Columbus Fire and Rescue, which utilizes its own air scent dog, a Golden Retriever named Dillon.

Special Operations Officer Austin said, "There''s no doubt these dogs are another valuable tool we use in service to the community. If they find one person, how can you put a value on that? It''s priceless."

Doty couldn''t agree more. It''s one of the driving reasons she helps other owners who are ready to make the commitment toward certification.

"If I can assist one person to succeed, and if they find one deceased person or survivor -- that''s my goal."

And when the animals'' search and rescue careers are waning and age takes its inevitable toll, the welfare of dogs who have given so much to their missions is paramount. Doty''s devotion is apparent in the six retired dogs she still cares for, and the former police dog she took in earlier this year, who had lost a leg to bone cancer.

"These dogs that have served, they have the right to live a good life ... that''s where my heart is."

Editor''s note: To learn more about the nonprofit GTR K9 Search Team, go to gtrbelgianmalinois.com, or contact Kathy Doty at [email protected] or 662-251-0174.