Blitz build: Habitat for Humanity and Fairview church team up to build house in nine days 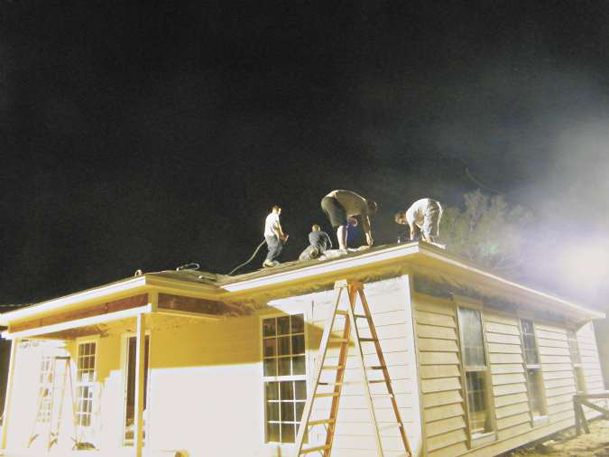 Volunteers work late into the night Sept. 28 to get a roof on the Columbus Lowndes Habitat for Humanity blitz build house virtually completed in nine days. Fairview Baptist Church partnered with Habitat for this fast-track project in west Lowndes County. Photo by: Provided 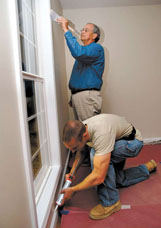 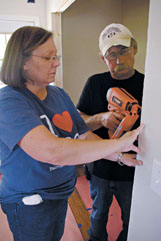 Brenda and Audie Pettit apply some âsweat equityâ Tuesday to the house their son, Trey Warrington, will soon move into.
Photo by: Kelly Tippett 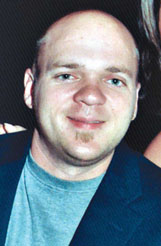 Day One
Photo by: Provided

Night has fallen, and dew forms on sparse tufts of grass. It's a time when most residential construction sites have gone silent and still until sunrise. But not this one. The thump of nail guns and banter of a roofing crew break the rural dark. The hour draws closer to midnight, but volunteers work under powerful flood lights, committed to getting the job finished before calling it quits.

This is a special house. A Habitat for Humanity house -- and the first blitz build the Columbus Lowndes affiliate has ever undertaken. And it's gone "beautifully."

Fairview Baptist Church of Columbus teamed with Habitat with the goal of building a wheelchair-accessible home in a period from Sept. 26 and Oct. 8, working day and night (except Sundays). But with 135 to 140 volunteers from the church, plus others from the community, including construction supervisor Scott Swain, it took only nine days to complete what normally takes two and one-half to four months.

The 1,150 square-foot structure will soon be the new home of 32-year-old Trey Warrington, who has been a paraplegic since an auto accident on Jan. 25, 2005.

His mother, Brenda Pettit, is the financial secretary in Fairview's office. When her church family learned Warrington had been approved for a Habitat house, they were ready to roll up their collective sleeves.

"We had just one stipulation," smiled Tommy Gillon, minister of senior adults and missions. "I said our people love to help, but their time is limited, so let's don't stretch it out. Let us get some folks together, and we think we can build this house in less than two weeks."

"We had been wanting to do a blitz build, but hadn't had everything come together for one before," she said Wednesday at the house site. But with Fairview on board, "they were all over it. ... Last Monday, we had a slab of concrete, and now, we have a house."

"It's the first time we've ever done it, and it's been a great partnership," praised Gillon. Among Fairview's enrolled membership of more than 1,700 people are numerous skilled contractors, builders and craftsmen who were able to lend their expertise to the ambitious project..

Habitat is a Christian organization dedicated to building simple, decent, affordable housing for deserving homeowners who go through a strenuous qualifying process and make monthly payments on an interest-free note to purchase their home.

Homeowners traditionally are required to invest "sweat equity" in the build, working alongside volunteers. Warrington's situation is slightly different. The normally independent Sears sales associate has been temporarily side-lined following surgery and is recuperating at the home of his mother and stepfather, Brenda and Audie Pettit. Their home in west Lowndes County is about a mile from the build site.

For the short-term, Trey is confined to bed. Any travel is restricted to stretcher and ambulance. His only glimpse of the construction was on Day 2, when the ambulance transporting him from a doctor's appointment in Meridian took him by.

Other than that, he's followed progress through photos brought home by his parents, who have lovingly given the sweat equity Trey can't right now. Brenda's colleagues in the church office also pitched in at the house.

'I couldn't believe it'

For Warrington, who lived in a small apartment before his surgery, the prospect of a house he can easily navigate a wheelchair in is "amazing."

He praised everyone involved, including Joe Howle, a faithful Habitat volunteer and former board member, who designed the house plans.

"Joe is a paraplegic, too, so they wanted he and I to get together to see how the house should work," explained Trey, who still loves fishing and attending drag racing events. "I went over and met him one afternoon, and within three hours, he called saying he'd gotten the floor plan done! And they were spot on; it was perfect. I just couldn't believe it."

Features in the new Habitat house include 36-inch doorways, roll-under sinks for the wheelchair, accessible cabinets and a bath that allows for a 360 degree turn-around.

Like Warrington, others are in awe of the efforts of volunteers, male and female, who worked various shifts between 7 a.m. to sometimes midnight. Many put in hours after their regular day jobs.

"I think what was most inspiring to me was the night when volunteers stayed until midnight or after, determined to get the roof on," shared Denise Sibley, president of Habitat's Board of Directors. "They were tired, they still had on their work clothes from that day, but they were smiling. They didn't want to quit until it was done."

"It was a God thing, because everything has gone like clockwork. Even when somebody said they couldn't do something, someone else would step in to say they could," said Gillon, who stressed that the build's success was a community effort, including volunteers from Columbus Air Force Base

Warrington's gratitude is obvious, his spirits buoyed by the anticipation of the new house. He confirmed his determination to continue healing.

"I'm very excited. I'm kinda stuck in bed right now, but I can't wait to get in it," he said, with enthusiasm. He remembers when his outlook wasn't so positive. "The first year (after the wreck), I was kinda down; I pretty much had to start over and relearn everything. I finally sat here and told myself I gotta do something. You just put your mind to it."

On Wednesday morning, Day 9, Arinder stood outside the almost-finished building, mentally checking her to-do list. Four County trucks trundled in to hook up electricity, as several volunteers took care of end-project details inside the home.

Standing on a rough patch of dirt that will soon be a front yard, Arinder summed up, "We know this blitz build would not have been possible without God's help. His hand has been in this from the beginning -- from finding a lot to build on to until the last nail was hammered."

Editors' note: To learn more about Columbus Lowndes Habitat for Humanity, visit columbuslowndeshfh.org or follow them on Facebook. Donations to the nonprofit organization help offset the cost of building homes and enable the program to continue assisting other deserving families and individuals. Contributions may be mailed to P.O. Box 126, Columbus, MS 39703.