Christmas from the heart: Grassroots outreach plans to feed 5,000 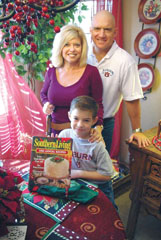 A group of volunteers are pictured in December 2010 after delivering meals in one neighborhood. In front (in red) is McKenzie Rhett. In the middle row, from left, are Margaret Cooper, Lily Stone, Liz Robinson, Tyler Rhett and Mary Riley Stone. In back are Cantwan Byrd, Melynne Stone, Boyce Frye and Penny Rhett.
Photo by: Courtesy Photo

Volunteers Mike Stone and his wife, Melynne, on the left, and Melody Taylor on the right, help prepare meals for delivery in December 2010.
Photo by: Courtesy Photo

"This started out in 2007 with, 'Hey, can you cook a ham? Can you make some green beans?' and now this," smiled Liz Robinson, her eyes bright with excitement. "We started out with 100 kids and their families, and now we're feeding 5,000 people!"

Like a proverbial wildfire, a single grassroots idea that began with Liz and Maj. Brett Robinson has spread rapidly within the Columbus community at large. On Saturday, Dec. 17, a battalion of volunteers will prepare and deliver thousands of meals -- and the hand of kindness -- throughout designated neighborhoods. The outreach is called Celebration of Hope.

Liz Robinson's petite frame belies her tremendous drive. The former San Antonio realtor and her husband, an instructor pilot at Columbus Air Force Base, share a heart for giving back -- and a vision of people from all backgrounds and churches of all denominations working together toward common goals.

After moving to Columbus in 2006, Liz was inspired to organize volunteers to serve a pre-Christmas meal at a local church for about 100 children and their families.

"She wanted to do something for the children in the community, just show 'em a little bit of love," said Brett, a native of Huntsville, Ala.

The outreach gained a groundswell of support, one that continues to grow. After the initial year, meal preparation moved to Hunt Intermediate School. In December 2010, 1,200 meals were delivered in the city. This year's goal of 5,000 represents a huge increase, but with several churches joining the effort, everyone is confident the mark will be reached.

"I can't tell you how excited I am," Liz enthused. "I think this is an amazing community. It's just a miracle how everybody's just taken the reins in their area and just gone for it."

Churches including Evangel, First United Methodist, Genesis Church, Immanuel Baptist and The Point are all handling various areas of food collection, preparation or providing volunteers. Students at Immanuel Christian Center for Education are also pitching in.

"Multiplied by 5,000, every task becomes magnified," Liz pointed out. Immanuel Church, for instance, is supplying volunteers to open the 1,468 cans the outreach will need.

"We're going to report to the church the morning of Dec. 17 and work in three shifts," she explained. "Some will prepare casseroles starting about 6 a.m.; some will take prepared casseroles to Hunt School. Some will help deliver meals. It's a big undertaking, but those volunteering see a need and want to give back and share with others."

Once meals have been plated in styrofoam containers at Hunt, teams of usually five to nine people, each with a team leader, will be dispatched with a prescribed number of dinners for neighborhoods selected with help from the Columbus Police Department and other resources.

Corporate and civic partners have come on board, as well.

Kroger has been of invaluable help, Liz emphasized.

"Manager Jimmy Woodruff has just been an angel since we started this in 2007," she stated. All 138-158 hams needed this year will be acquired through the grocery store, which has offered to slice them all. "The whole meat department has been wonderful; I can't say enough about them."

After slicing, hams will be dispersed among volunteers for cooking.

Christine Wilson is on-site supervisor at Staffmark, the temporary staffing agency at Golden Triangle Mills Services on the Severstal property.

"We're so excited to be part of this. Starting at the beginning of November, we began a green bean drive for it," Wilson said. "Our employees feel we are fortunate to be employed and wanted to give back to our local community and support those who may currently be in need."

Newell Paper Co. is donating the "to go" serving containers for the meals. Rob Teal, general manager, heard about the outreach through a friend at church.

"From my background, I believe we're called to serve and not to be served. It's not really an obligation; it should be a desire of ours to help those who may be less fortunate," Teal shared.

The Girl Scouts of Troop 20253 want to make 2, 500 goodie bags for volunteers to hand out to children. The Scouts are in need of small items like candy canes, travel-size toothpaste and toothbrushes, chapstick, yo-yos, pocket-sized dolls, model cars or even fast food chain coupons.

Businesses or individuals wishing to donate goodie bag items can drop them in collection boxes soon to be set up at the Fashion Barn in downtown Columbus or at Bokay's Florist on Highway 45 North.

The Robinsons hope churches will seize this as an opportunity to come together in hands-on ministry.

"This is not a spectator sport," said Brett of his and his wife's strong faith that compels them to grow Celebration of Hope. "We are called to serve; we're not called to sit."

"I'm praying the experience will change a lot of people's way of looking at things, change their hearts to get involved throughout the year, whether it's at Loaves and Fishes or other programs," said Liz, referring to the Columbus soup kitchen that provides meals several times each week.

"If people spend some time talking to others, they usually find they may be in a different situation than you, but they have the same emotions, the same dreams and hopes," she added.

At this stage, the primary need is for funds (or Kroger gift cards) to purchase hams. (No actual hams, please, due to lack of storage space.)

"The other main thing are the small items for the Girl Scouts' goodie bags," noted Liz, who praised everyone joining the outreach.

"I love this community. I can't explain it, but there's something about this city ... I've lived all over the world, and people here are the friendliest of anywhere I've lived. I see so much in this community, and so much in its future."

She continued, "If anyone had asked me 10 years ago if I would be doing this, I would have thought they were crazy. But God has really changed my life and changed my heart to serve. Someone shows love and that they care, and I think that's how you change a city -- showing kindness, showing love. I believe that."

Editor's note: For more information about participating in the Celebration of Hope outreach, contact Liz Robinson at 662-425-5886.