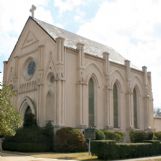 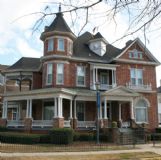 I am frequently asked, "What is the oldest house in Columbus?" However, I would rather answer, "What is the most interesting building in Columbus?" When it comes to the architectural history of Columbus, I have two friends who are the experts and on whom I normally rely for the best information. In Columbus, I usually just call Sam Kaye, but with such a potentially loaded question for a local resident I thought it best to go out of town.

I asked Ken what he considered the five most interesting but not necessarily the most historically important buildings in Columbus. Ken was gracious and brave enough to respond.

The first he mentioned was the Williams-Gass House at the corner of Second Avenue North and Fourth Street. It was built about 1843 by Issac and Thomas Williams, who were "free men of color." Though African-American, the brothers had prospered in Columbus during the 1840s. The house is a raised cottage with brick basement and frame principal floor. It's broad, low gable roof is typical of Carolina Low Country architecture, and the Williamses were from South Carolina. The Williamses moved from Columbus in 1851, and in 1858, Adam Gass bought the house from the estate of Thomas Williams, F. M. C. Gass then added the east wing.

Ken next mentioned the Ole Homestead at the corner of College and Third Street South. The Ole Homestead is a vernacular raised cottage that was purchased or constructed by Charles Abert around 1827. It originally faced the Tombigbee River. H.S. Bennett, who was renting it in 1830, was its first documented occupant. He later represented Mississippi in Congress. The house was enlarged and reoriented to face College Street in 1835 by John Kirk. It may be the third oldest surviving raised cottage in Mississippi and is probably the oldest surviving house within the original 1821 town limits. Ken finds it reminiscent of "Madame John's Legacy," an 18th century house in New Orleans. The house has been approved for Mississippi landmark status.

Ken views Annunciation Catholic Church as most interesting. The church was designed by French-born priest and architect Father Jean Baptist Mouton in a Gothic style that was inspired by Paris' 13th Century Church of Sainte-Chapelle. The cornerstone was laid May 4, 1863. "The facade of the church is an eclectic assortment of French Gothic motifs. It's three-bay composition is a typically French ploy that dates to the earliest Gothic cathedrals." The vaulted ceilings and interior plan of the church also closely duplicate the interior form of Sainte-Chapelle. Each of the interior columns and piers is painted to appear to be marble. The church is an example of a type of Gothic form rarely found in the South and is a Mississippi landmark.

The W. N. Puckett House on the MUW campus is considered by Ken to be one of the finest examples of a brick Queen Anne style house to survive in the state. It was constructed on College Street about 1902 by the Columbus contracting and brickmaking firm of Lindamood & Puckett. The house exhibits one of the best examples of the beautiful and unique salmon-colored brick that was produced by Lindamood and Puckett during the late-19th and early-20th centuries. That firm is still in business as the Columbus Brick Co. In 1928 the house was moved a half block south so that Whitfield Auditorium could be built on College Street. The Puckett House is a Mississippi landmark.

Ken could not decide between two adjacent buildings which he considered the other most interesting building in Columbus. One is the one-story Greek Revival building across from the courthouse that Roger Larson used for the Columbus Packet office. It was built in the early 1840s as a law office. The other building is the three-story brick office next door. It was constructed in a simplified Greek Revival style during the late 1850s. For many years, it was the Woodmen of the World building with the lodge hall on the third floor. The offices in the Woodmen building and others along Lawyer's Row were originally sold much like condominium offices are sold today. The building is one of the largest antebellum office buildings surviving in Mississippi.

Each of us has our own favorite building in town, so it is enlightening to see what a leading out-of- town historic preservation expert finds most interesting.

Rufus Ward is a local historian. Email your questions about local history to [email protected]

1. Those veggies and flowers you never had time to grow? Just look at us now COMMUNITY

3. In the garden with Felder: Staying occupied? COLUMNS

4. Local voices: Celebrating Easter in the era of COVID-19 COLUMNS