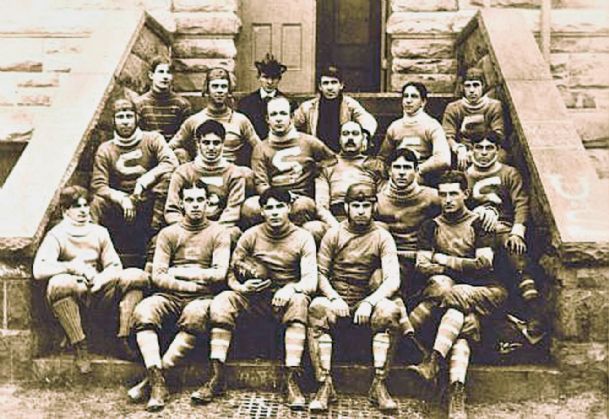 With all the coverage of the upcoming Super Bowl, thoughts turn to great football teams. In pro ball there are memories of the Old Green Bay dynasty. This past season of college ball brought back memories of the old LSU Chinese Bandits, at least until Alabama showed up for the rematch. Then there was East Mississippi Community College and its trip to Arizona to win the community/junior college national championship.

But the greatest team ever? That honor has to go to a team from the University of the South which is affectionately known as Sewanee after its small-town Tennessee mountain top location. The Sewanee team of 1899 left a legacy that will probably never be equaled. The late Joe Paterno once said that the Sewanee team's accomplishment " has to be one of the most staggering achievements in the history of the sport."

It was not that string of victories, however, that resulted in the team being called the "Iron Men of Sewanee." "The Four Horsemen" of Notre Dame have nothing on the Iron Men and "Red" Grange has nothing on "Diddy" Seibels, the Sewanee halfback and captain. The Iron Men were almost superhuman on a road trip in November 1899. It was that trip that created the legend.

The 21 Sewanee players, coach Billy Suter, manager Luke Lea and trainer Cal Burrows traveled by rail in a chartered Pullman car on a football adventure of 2,500 miles. The team's first destination was Austin, Texas, where they arrived on the evening of Nov. 8. On Nov. 9, 2,000 people paid a dollar each to see Sewanee defeat Texas 12-0. The players again boarded the train and traveled to Houston where, the next day, they defeated Texas A&M 10-0. Another train ride after that game carried them to New Orleans where, on Nov. 11, they defeated Tulane 23-0.

The following day was Sunday and so Sewanee, an Episcopal school, took the day off and rested. Monday the 13th saw the team in Baton Rouge after a short train ride. That day they defeated LSU 34-0. The next and final stop was Memphis where on the 14th they played Ole Miss, "the long haired knights of the oval from Oxford." Unlike Sewanee, whose players wore leather helmets, the Ole Miss players did not wear helmets but grew their hair long and bushy for protection, thus their nickname. Again, Sewanee prevailed 12-0.

In six days, Sewanee had played and won five games, all on the road against the cream of Southern football. In those five games, Sewanee had outscored their opponents 91 to 0. After arriving home, Sewanee rested for six days and then beat Cumberland 71-0. The following week was their only close game and the only points scored against them. They defeated an Auburn team coached by the legendary John Heisman (he has a trophy named after him) 11-10 in Montgomery. The season ended with a 5-0 victory over North Carolina. It was a season like no other team would ever have.

Who were these men of iron? They were students from across the entire academic spectrum; five were law students, four medical students, four theology students, and eight were undergraduates. Sewanee went on to become a charter member of the SEC but the small strongly academic mountain-top school could no longer keep pace with the rising football power houses and soon withdrew.

The iron men of Sewanee accomplished a feat that I can never see being equaled. Though not the most famous, they are the greatest football team of all time. How could they accomplish what they did was a question asked of team captain Diddy Seibels in 1931. He replied,"To what was Sewanee's brilliant success due? I attribute it to one thing alone and it is the greatest thing any team can have: teamwork. ... There were no jealousies, only the indomitable will to win, that unconquerable never-say-die Sewanee spirit."

I first heard the story of the Iron Men from my brother and a number of friends who all found and showed me that Sewanee really is a special place. For the full story of the legendary 1899 season I would suggest Wendall Givens' book, "Ninety-Nine Iron."

Rufus Ward is a local historian. Email your questions about local history to him at [email protected]

4. In the garden with Felder: Gardening with a little help from a four-legged friend COLUMNS