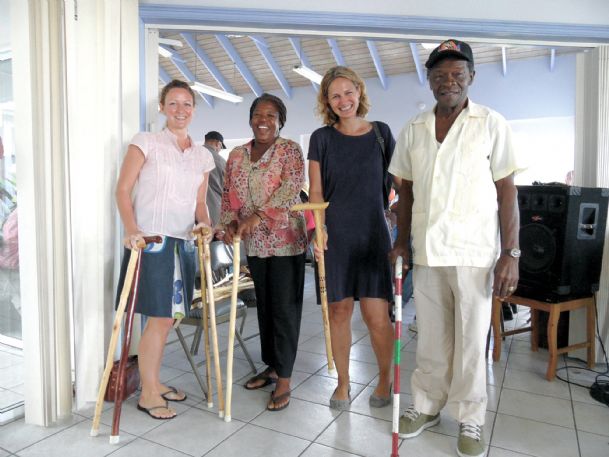 Columbus native and occupational therapist Sandy LeBlanc, left, and her colleague Tanya Owen, third from left, deliver walking sticks made by Adrain Rogers of Columbus to the Older Peopleâs Welfare Organization on the island of Montserrat in December. They are pictured with Bernadine Collins, head of the organization, and one of the islanders. LeBlanc and Owen spent a month working with patients and health care workers on the island that has been hard-hit by hurricanes and volcanic eruptions. Photo by: Courtesy Photo 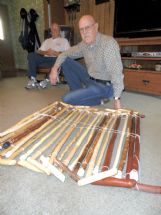 Somewhere today on the small West Indies island of Montserrat, a disabled young mother recovering from a stroke is grateful for a new handmade walking stick -- a gift crafted with kindness in the Golden Triangle.

With his new cane made in Columbus, another islander coping with partial foot amputation is navigating a bit better over the rough volcanic terrain of his homeland. When he received it in December, he gladly discarded the broken mop stick he'd been using as a walking aid.

Simple things. Big differences. Building blocks in a mission undertaken by two young women -- one a native of Columbus -- and a willing 84-year-old accomplice in Columbus.

When occupational therapist Sandy LeBlanc and her colleague, physiotherapist Tanya Owen, decided to spend December sharing their skills with health care workers and patients on the under-served island, they hoped to take a few walking aids, like canes or crutches, with them. LeBlanc currently resides in London, where she is neurodisability clinical lead with the Camden REACH Neuro Team. The 1997 Columbus High School graduate's family still lives in Columbus. A phone call back home to her granddad, Clarence LeBlanc, led to a blessing she never expected.

"I was talking to my grandfather over the phone one day about the bureaucracy of getting support for equipment funding, and Papaw had the bright idea of talking to his friend, Adrain Rogers," said the 33-year-old LeBlanc.

As a hobby, Rogers makes walking sticks from trees he harvests in and near Columbus.

"After Mr. Rogers heard about the project, he spent several months making 25 sticks for us!" said the therapist. "They were amazing sticks, each one crafted individually."

Rogers is no stranger to giving. When pressed, he estimates he's made and given away 300 to 350 canes since retiring more than two decades ago from Tennessee Gas Pipeline. It's a habit he developed during his 31-year career as a pipeline technician.

"I'd always have a knife in my pocket, a sharpening stone and a stick to whittle on," smiled the cane carver, who finds much of his raw material on rural roadsides, old fence rows or around overgrown, neglected buildings.

"My daughter and I ride around a lot together; she says I'm dangerous cause I'm as apt to be going backwards when I spot something I can use," he joked.

While some walking sticks he makes feature decorative carvings or wood-burn designs, the sturdy sticks destined for Montserrat were designed for function.

An appreciative LeBlanc picked them up at Thanksgiving while visiting her family en route to the British overseas territory.

"I was able to take them with me in my luggage (discreetly) to the small island," she said. "I wasn't able to fit in many clothes, but I was so grateful for being able to bring all those sticks with me!"

This patch of land roughly 10 miles long and 7 miles wide, bordered by the Caribbean Sea, has been plagued by natural disasters that left the population hurting. In 1989, Hurricane Hugo decimated the island. Just as people recovered, the Soufriere Hills volcano, dormant for centuries, rumbled to life in 1995, triggering a period of eruptions which soon covered the capital in ash, destructive lava flows and mud that destroyed settlements and ports. Multitudes left, plunging the population from around 13,000 to about 2,500, said LeBlanc.

"Many who left were of working age, leaving behind an older and more dependent population," she continued. Many had physical impairments, most often caused by diabetes, stroke and cardiac conditions.

"It's still recovering; the population has grown to around 5,000 people," said LeBlanc. "The hospital, clinics and social care department have some very dedicated staff who do the best they can with resources available, but there is currently no rehabilitation service or equipment for people with physical disabilities."

The island is, in many ways, a volcano, with lots of hills and uneven terrain, the therapist pointed out. Without proper walking aids, "the disabled are unable to even get out of their front doors safely, much less participate in community activities. Too many become quite isolated and effectively prisoners in their own homes."

At the invitation of Owen's mother, an adviser and social worker on Montserrat, LeBlanc and her friend dedicated the month to working with patients, their families and health care workers, passing on practical knowledge and basic rehabilitation skills.

"We ran five half-day workshops, visited the hospital and the two care homes, and provided individual assessment and treatment advice for about 20 identified patients," LeBlanc said.

Some, like the 24-year-old mother who suffered a stroke during childbirth while the volunteers were actually on the island, put a poignant, personal face on the critical need for rehab services. She also sharply illustrated how a simple walking stick from Mississippi could impact a life.

"She was so proud of that stick, and we were so happy to help her," shared LeBlanc, who, along with Owen, provided daily physical therapy and occupational therapy, helping the young woman learn to care for her new baby with only one functional hand.

With great fanfare, a number of the walking sticks were donated to the Older People's Welfare Association on Montserrat, at their Christmas party. The organization will distribute the canes as needs are identified.

To know they're being put to such good purpose is fulfilling for Rogers.

"The primary objective is to give them where they will be of some use," said the craftsman, who happily invested an average of three hours' work in each stick.

LeBlanc and Owen have returned to their careers in England and are in the process of writing a recommendations report for the Montserrat Ministry of Health on building a workable and sustainable community-based rehabilitation service.

"This has been such a rewarding and unique experience for me," said LeBlanc. "Working for even a short time in a developing country highlights the need for continued advocacy for access to health care as a human right. It also reminded me in such a powerful way that we should never take anything for granted -- that seems a clichÃ©, but I suppose it is for a reason."

One unanticipated benefit of the project is the proposed formation of a Disabled People's Organization on Montserrat.

"We feel we were able to empower some local people with disabilities, to help them realize their rights in society and to provide a forum of support and sharing of knowledge," she emphasized. "We cannot stop smiling about the seeds that have been planted."

1. Summer's okra: Charles Speed likes it 'on his plate' FOOD

2. Butter Together: The rest of the plate FOOD

3. Meals that deliver taste at a low cost FOOD