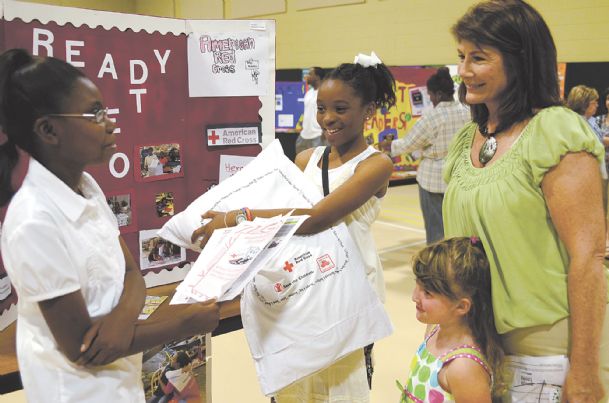 From left, Sale Elementary School students Chelsey Little and Morgan Williams, both 10, give an âelevator speechâ about the American Red Cross to Cindy Parker and 3-year-old Gabby Getter Monday at the Columbus school. Working in teams, Saleâs fifth-graders researched and marketed nonprofit organizations for their International Baccalaureate exit project on advertising. Chelsey is the daughter of Rita and Everett Little. Morganâs parents are Jamika and Derrick Williams. Photo by: Luisa Porter

Two months ago, fifth-grader Jalyn Collins had never heard of guerilla marketing. Her classmate, Morgan Williams, could not imagine she would "pitch" a product to random shoppers at the mall. And 11-year-old Kevin Brown certainly had no idea what an elevator speech was.

Their concept? The power of advertising in today's world to influence people and the choices they make. Their product? The charitable causes of numerous nonprofit agencies and organizations in Columbus.

"Part of the IB process is that the last grade at the school does this," explained Nancy Bragg, principal at Sale School. "This is our first fifth-grade class since we were recognized as an IB school. We were a little apprehensive, with it being our first time, but our students just took it on and went with it."

Under the guidance of Bragg and Sale's IB Coordinator, Kay Ellis, along with teachers Melissa McKinney and Michele Shepherd, the "graduating" class brainstormed to select an overall topic that applies globally.

"We chose a central idea -- advertising -- and then students chose how to implement that idea in their own way," said Shepherd.

The children elected to develop marketing campaigns to promote nonprofits, many of them United Way agencies. Among others were Operation Ukraine, Loaves and Fishes and Main Street Columbus.

Working in teams of two and three, the enthusiastic fifth-graders researched their chosen organization, prepared a written unit plan (just as their teachers do) and created an exhibit and strategy to "sell" it to the public. They talked to agency representatives, communicated with mentors, collaborated with partners and teachers, and made presentations.

Most of the work was done at school.

"We wanted the projects to be student-generated," said McKinney. "These are not teacher- or parent-generated."

Bragg praised the teachers, who meshed exit project work with their regular curriculum, and complimented the children, saying, "I'm so excited about the way these students got out in the community and worked with the organizations they chose."

Early in the process, Sale invited public relations professional Karen Stanley to cover a few advertising and marketing basics with the fifth-graders.

Stanley, founder and marketing director of neonFROG in Columbus, encouraged her protÃ©gÃ©s to take their campaigns beyond school walls.

"We talked about how expensive it is to get a billboard, a TV commercial, or an ad, but we also talked about guerilla marketing -- finding ways to get their message out without a big budget," she said.

Guerilla marketing relies heavily on time, energy and imagination, not dollars. Students came up with low-cost ideas, like holding bake sales to raise money for their agency, setting up informational booths at a shopping center, or making promotional videos to post online.

"They were a fun group to talk to; they had fantastic questions!" Stanley said.

"We learned how to tell people quick about the Red Cross," Morgan said Monday night, as a milling crowd of parents, teachers and supporters viewed all the exhibits in the Sale gym. Each project had a team member on hand to deliver the elevator brief.

Stanley explained, "I told them if they couldn't tell me in an elevator ride about their project, they didn't really know it. It's important that they can succinctly tell anybody who they are and why they're there in a very short amount of time."

The exit project involved much more than research and creating posters. Some teams even took their show on the road.

After learning all he could about CONTACT Helpline, the 24-hour crisis and reassurance call agency, Courtland Malone's team set up a display in Leigh Mall one Saturday.

"You have to have confidence in yourself to speak; you can't be just lagging," said the self-assured 12-year-old.

Shepherd's entire class got hands-on by volunteering at Loaves and Fishes, one of the exit project organizations. They served food at the community soup kitchen Monday. Many expressed interest in volunteering again this summer.

A few students got so interested in their organization, they sold themselves on joining, which happened with the team that researched 4-H.

Others solicited donated items -- cleaning supplies for Home Delivered Meals; cups and kitchen towels for Loaves and Fishes; and toothbrushes and shoes for Operation Ukraine's efforts in Haiti.

"I was thinking about things I could do to persuade people to help," said Keshala Williams, part of the Ukraine team. Like her classmates, she kept in mind character-building attributes Sale emphasizes year-round, including respect, independence, creativity and empathy.

"I used social skills because I'm really good at respecting people and taking responsibility," she shared candidly. "I'm independent because I can do stuff on my own, and I'm caring because I care for people who are less fortunate than I am. I loved this project ... "

Like staff at other agencies, Perneatha Evans, office coordinator for the Northeast Mississippi chapter of the American Red Cross, was impressed when students contacted her with research questions.

"I think this project sets a baseline for us in preparing our children -- our future -- to give back to the communities, and I think that's the most important thing we can give them," she stated.

Ellis said, "I have to tell you how proud I am of our fifth-graders and how they've tried to find ways to become better citizens of our community."

Bragg added, "And look how much they learned themselves about organizations that reach out to people. These students did an awesome job. They are becoming 21st century learners, not only focusing on their own culture, but other cultures around the world, where we hope they'll be lifelong learners."

2. Help yourself to healthier hummus FOOD