Pillowcase frocks are 'changing lives, one little dress at a time' 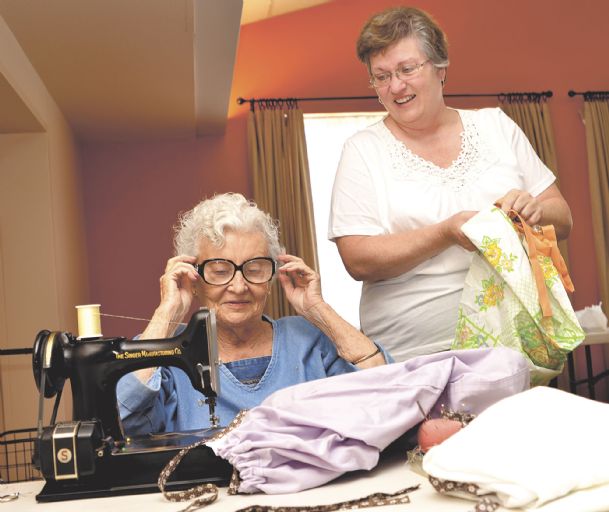 Deacon Pam Rhea looks on as seamstress Bettye Jane Kerby prepares to sew colorful straps on dresses made from pillowcases June 16 at St. Paulâs Episcopal Church in Columbus. Kerby and Rhea were among volunteers at a workday for the âLittle Dresses for Africaâ project. Photo by: Luisa Porter/Dispatch Staff

As the morning progressed, piles of donated pillowcases in a painter's palette of colors and patterns were transformed into dresses for some of the world's most vulnerable children.

"Little Dresses for Africa" is a national Christian non-profit organization that has already distributed thousands of simple frocks to girls through orphanages, churches and schools in 39 African countries. When requested, dresses have also been sent to Haiti, as well as to remote villages in countries including Guatemala, Mexico and Cambodia.

At St. Paul's in Columbus, the concept was a perfect fit for parishioner Jennet Lacey, an avid seamstress who coordinates the local "Little Dresses" effort. She gave credit to Pam Rhea -- an ordained deacon of the Episcopal Diocese of Mississippi who serves at St. Paul's -- for finding the sewing project.

"Pam's role as deacon is to carry the church out into the community, and she does such a good job of matching people with their talents," praised Lacey, deftly guiding material through her sewing machine.

"I'm a firm believer in heart to hands," continued the elementary school teacher. "This is a project that's dear to my heart, and I'm so pleased with the response from St. Paul's and from across the community."

Indeed, volunteers cross denominational and gender lines. They come from different churches and backgrounds and range in age from 9 to well into their 80s.

"I love the generational aspect of it; everyone is welcome," remarked Lacey.

The June workday was the third in a series held at St. Paul's on College Street. The first was in October, the second in January. Already, more than 100 completed garments have been sent to children in Madagascar.

"Our priest, Ann Harris, is friends with the bishop of Madagascar and his wife, so we were happy to have a specific place to send our dresses," Lacey said.

Nationally, dresses have been donated from 50 states. Many reach their ultimate destination via mission teams and travelers to Africa. Others are shipped.

Rachel O'Neill of Trenton, Mich., founded "Little Dresses for Africa" after returning from a safari vacation several years ago. She was touched by what she saw in the villages of the world's second-most-populous continent.

"When you look in these little girls' eyes you could see they know they have a long way ahead," O'Neill shared in a previous interview.

Many of the pillowcases volunteers at St. Paul's use were provided at deep discount by a Columbus retailer, thanks to the efforts of parishioner Bobby Harper.

"I took the easy job," Harper laughed. "I liked the project once I heard about it, and I knew I couldn't cut and sew, so I thought I would volunteer to try to come up with a generous supply of pillowcases and that I could contribute that way."

Other pillowcases are gently used.

"Have you seen these little tucks and tatting?" volunteer Marian Hazard asked, showing a pretty stitched pillowcase to Lacey. "This will be somebody's dancing dress," Hazard smiled. "Wouldn't you like to know the history of some of these pillowcases?"

"It's been fun to watch people pick out which ones they most want to work on; we've had some gorgeous ones that have been in somebody's closet or cedar chest."

"My favorite dress I worked on had really nice lace. That was worth pricking my finger five times in the same spot for!" grinned Whitwam. "In the end you would never have thought it was a pillowcase! The straps completely change it. And it's very economic."

Poros added, "It feels very good to be helping with your own hands, rather than just giving money."

Across the room, longtime parishioner Bettye Jane Kerby sewed vibrantly colored straps onto dresses taking shape. She used her trusted Singer Featherweight portable sewing machine, a treasured gift from Kerby's parents on the occasion of her college graduation in 1952. It still sings.

"You can see there is a lot of happiness here," Kerby said, lifting her eyes to gaze around the room. "Even the girls who don't sew can cut out armholes, iron, pin the bias tape for necklines and straps, and run elastic in the front and back."

Lacey and Rhea hope "Little Dresses" will spread to other churches and groups in the area. The need is never-ending, and most first-timers are amazed at how, using a few simple steps, any size new or gently-used pillowcase can quickly turn into a prized possession for a grateful little girl.

St. Paul's Church currently has an ample supply of pillowcases and plans to hold its next workday in September. The door is open to new volunteers who believe in "heart to hand."

"Among many other things, this project helps us realize how very fortunate we are in the United States," observed Rhea. "Every time I think about it, it really does bring tears to my eyes -- that one little dress can put delight on a child's face. It's a way to reach across the world, to another continent, in a way we seldom ever get to do."

3. Elayne, going strong: The 'doctor of dots' is at it again COMMUNITY

4. In the garden with Felder: Magnolias and Mississippi COLUMNS