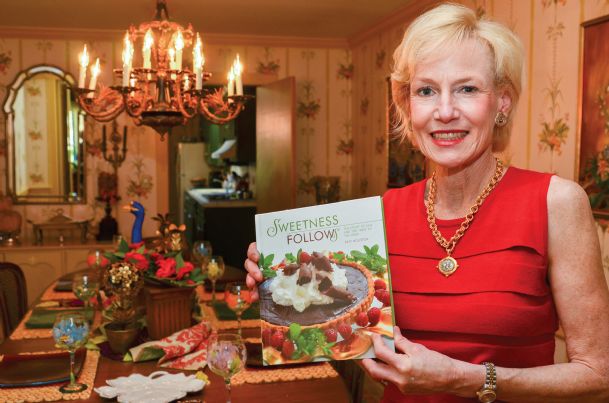 Katy Smith Houston is pictured with her cookbook, âSweetness Follows: The Story of Sam and the Treat of the Week,â in the home of her longtime friend Dai Wilson of Columbus during a recent visit. The cookbook is a compilation (plus some) of dessert recipes Houston made every week for 62 weeks for a special young man recovering from traumatic brain injury. Houston is a alumna of Heritage Academy and Mississippi State, currently living in the Jackson area. She will attend a cookbook signing at Pizazz in Columbus Tuesday, March 12 from 11 a.m. to 2 p.m. Photo by: Luisa Porter/Dispatch Staff 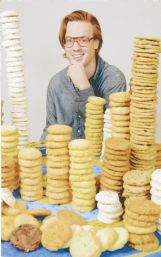 Sam Lane Jr. has his pick of Katy Houstonâs cookies in this photo included in the cookbook.
Photo by: Greg Campbell/from âSweetness Followsâ 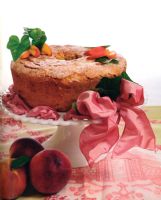 Cookbooks aren't supposed to make us misty-eyed, but then, this is no typical cookbook.

"Sweetness Follows: The Story of Sam and the Treat of the Week," by Columbus native Katy Smith Houston, is more than a collection of dessert recipes. It is a heartfelt testament, a celebration of a young man who overcame a traumatic brain injury and the loving support of family and friends that helped him do it.

The story begins with friendship. First, between Katy Houston and Leila Lane, who both live in the Jackson area, and later, their sons, born three months apart.

From the time they were "crawlers," Houston's son, Andrew, and Sam Lane Jr. were buddies. Their shared adventures and milestones took them all the way to college together, at the University of Georgia in Athens, Ga. It was there, on a spring afternoon in their junior year, that Sam was hit by a drunk driver while cycling to an organized ride to raise bicycle awareness. He suffered a devastating brain injury. At one point, family and friends were even urged to say their goodbyes.

But Sam is a survivor. He endured five harrowing weeks in a coma, during which he was transferred by air ambulance to St. Dominic's Hospital in Jackson. He later spent another two months in the Mississippi Methodist Rehabilitation Center, undergoing intensive physical, occupational and speech therapy.

Houston visited often, and when Sam was finally able to eat again, she made him a promise -- that she was going to "feed him back to health."

"With Sam's long and uncertain road of recovery ahead of him, I was at a loss of what I could do," said Houston. "Doing nothing was not an option. I decided I would cook, and that is what I did!"

Treats of the week

Houston's love of cooking dates back to an Easy Bake Oven and three brothers -- Forrest, Austin and Norwood -- who loved everything she made growing up in the North Columbus home where they lived with their mother, Nancy, and their dad, Lynn Smith, now deceased.

For Sam and his family, she chose to make desserts while Sam's therapy continued during 2007 and 2008. Every Monday for 62 weeks, she showed up at the Lane household with a different sumptuous homemade sweet. If she had to be out of town, she made something in advance and arranged for it to be delivered.

"Standing on his doorstep every Monday morning was my unspoken way of saying, 'I am with you in this, and I care about you,'" Houston said. The weekly confection became known as the "Treat of the Week" and was always looked forward to. They continued until Sam was so improved, he was able to resume his studies, this time at Ole Miss.

As Sam's mother, Leila Lane, writes in the cookbook foreword, "These 'Treats of the Week' from Katy were the highlight of every Monday for over a year, and they exemplify the sweet, caring, sustaining support we received from hundreds of people during Sam's recovery."

Encouraged to turn the dessert recipes into a cookbook, Houston attended a seminar in Nashville, Tenn., presented by Favorite Recipes Press. She obtained invaluable guidance, including a comprehensive publishing manual.

The recipes Houston had made for the Lanes were gathered from family, friends, magazines and other sources. She got them organized and formed a testing team to fine-tune each one. The group often met weekly to receive recipes and evaluation forms. If the recipe fell short of producing a perfect dessert, it was revised and retested until it did.

All in a name

Sam himself came up with the book's title. The renowned Athens music scene had been a big draw for Sam and Andrew when choosing to go to college there. One of Athen's most famous exports is the band R.E.M., which has a song titled "Sweetness Follows."

The band, moved by the story, readily gave permission and even pledged to help spread word of the cookbook through their website.

In addition to 84 dessert recipes, "Sweetness Follows" has ample photos of Sam and Andrew as children, as well as pictures of a grown and smiling Sam, who ultimately graduated from the University of Georgia. Passages from his family, friends, neurosurgeon, nurse, teachers and high school football coach offer insight into this young man who is an inspiration to so many.

In the cookbook, Houston makes a request: "I would ask that when you make a recipe from this book that you would stop and say a prayer for Sam as he continues to improve. ... In the South, friends, family and food are all tied together. This story about Sam celebrates all three."

Katy Houston will attend a book signing March 12, from 11 a.m.-2 p.m. at Pizazz, located at 2118 Highway 45 N. in Columbus. A portion of the cookbook's proceeds go to The Wilson Research Foundation at the Methodist Rehabilitation Center in Jackson.