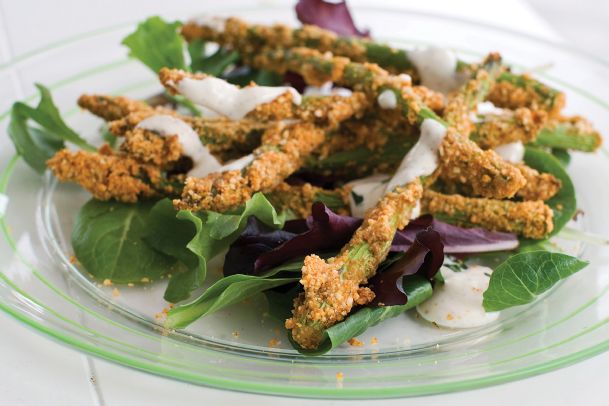 Almond-crusted bake-fried asparagus is shown served on a plate in Concord, N.H. in this image taken on March 11, 2013. Photo by: AP Photo/Matthew Mead

What I wanted? A simple recipe -- any recipe, any trick, any technique -- that would entice my 8-year-old son to embrace broccoli.

What I got? A simple recipe that ended up so good, so crispy, so delicious I no longer cared if he ate the broccoli (he did), because I wanted it all to myself.

For inspiration, I considered the vegetable tempura served at Japanese restaurants. I liked the idea, but not all the fat (not to mention mess, trouble and time) that goes with the frying of it. So my goal was a crispy coated vegetable that cooked up without a lot of oil.

Since I wasn't frying, my coating would need to be made from dry ingredients (traditional tempura coating is a pancake-like batter), and those ingredients would need some sort of glue if they were to stick to my florets. Eggs whites were an easy choice. I whisked a few (from a carton for ease) in a very large bowl. Then I added my florets and used my hands to toss until thoroughly coated.

Onward to my dry coating. Breadcrumbs were an obvious choice, but I wanted something with more body and more flavor. After several attempts, almond flour (sold in the gluten-free and natural foods sections, or made at home by grinding almonds in the food processor) proved to be the best choice.

Once I'd seasoned my almond flour, it was just a matter of tossing the egg white-coated florets a few at a time in the almond mixture. For even roasting on all sides of the florets, I set a wire rack over a rimmed baking sheet, then arranged the florets on the rack. A quick roast at high heat resulted in deliciously crisp, savory and -- dare I say -- meaty broccoli.

But since we're coming into spring, I wanted to see just how adaptable this recipe is. Turns out it produces equally good crispy asparagus. Because asparagus is much smoother than broccoli, the coating doesn't adhere quite as evenly, but it's still delicious.