Ham it up: Tips for delicious glazed hams for your Easter table 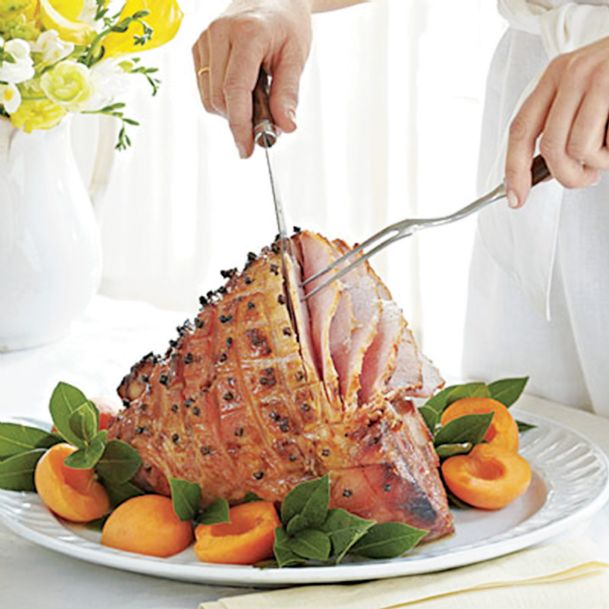 Succulent ham is a traditional choice for Easter feasts in the United States. Dress them up with glazes for even more taste and moistness. Photo by: Courtesy photo

Ham and Easter seem to go together like bread and butter. Across the country, juicy hams will be the centerpiece of many a menu Sunday, as families gather for fellowship and feasting. Cooking your own ham may seem like a colossal chore, but it's probably easier than you think, and picking up a store-bought ham that's been partially or fully cooked is a great short-cut.

If you didn't grow up at your mama's knee in the kitchen as she baked ham, today's information may come in handy. And we hope the recipes are useful to experienced cooks as well.

Hams with the bone left in tend to be more flavorful than boneless hams, allrecipes.com tells us. Many bone-in brands are spiral-cut, meaning the ham has been cut in a continuous spiral all the way around the bone, producing thin slices. But remember, a bone-in ham will have less meat per pound than a boneless one. When buying bone-in, figure at least 3/4 pound for each person who will be at dinner. For boneless ham, figure at least 1/4 pound per person according to the site.

If you're not using a spiral cut, these three steps on "how to cook the perfect Easter ham," as summarized by Mary Allen Perry for Southern Living, offer some guidance.

The most traditional way to prepare a whole ham is to bake it, and you can enhance the meat by using a glaze. The most popular ones contain combinations of fruit juice, wine or whiskey, honey, mustard, brown sugar, fruit preservatives and spices. They can be store-bought, or you can concoct your own. Brush some of the glaze over the surface of the ham before placing it in the oven.

Almost all hams have been either partially or fully cooked before packaging.

Mmm -- can't you just taste that moist, juicy ham now? To help ensure it gets to the table that way, place your ham cut-side down in a baking pan, suggests allrecipes. If it's going to be in the oven for more than an hour, you may want to place a foil "tent" on top to help keep it from drying out. Continue to brush it with glaze and baste with the pan juices every 20 minutes or so, until it's heated through.

To finish the ham and give it a yummy caramelized coating, remove the foil tent, brush with glaze and pan juices one more time, then turn your oven to the broiler setting. Allow the outside of the ham to get nice and browned; this should only take five minutes, but watch closely so it doesn't get too dark. When the internal temperature reaches 160 degrees F., it's ready to serve.

Choose a platter large enough to allow 3 to 4 inches around the ham, so you can add garnishes like apricots, pineapple, vegetables, greens or other goodies for a celebratory presentation on your Easter table.