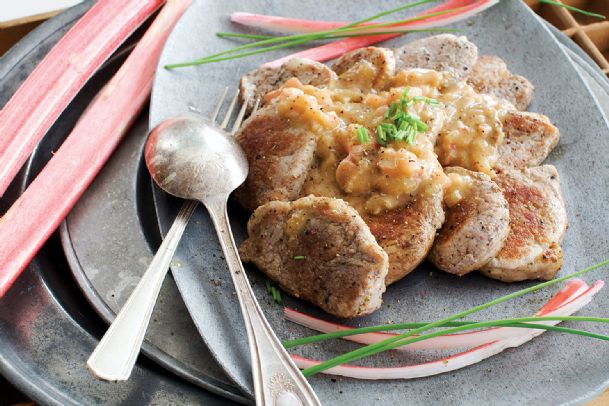 Pork tenderloin medallions with rhubarb-orange sauce are shown served on a plate in Concord, N.H., in this image taken on March 18. Photo by: Matthew Mead/AP

When I informed The Husband that I was going to make pork with a rhubarb sauce, he dismissed the idea out of hand. He does not like sweet in his savory.

I tried to explain (as I have a thousand times before) that there's a good reason why any number of classic dishes team up meat and fruit, including duck a l'orange, foie gras with apples, and pork with prunes. Fruit contains acid as well as sugar, and acid has a winning way of cutting through the fatty richness of duck, pork and brisket.

The Husband wasn't buying it. He'll eat his roast duck with a peppercorn sauce, his pork with French mustard, and his foie gras without accompaniment of any kind, thank you.

I could have added that rhubarb is a vegetable, not a fruit, and that it's so tart (not sweet) it's rarely present in a recipe without some kind of sugar added for balance. But I would have been banging my head against a wall. So I rocked on regardless because I love rhubarb.

An import from England, rhubarb was known in 19th century America as "the pie plant" because that was where it usually ended up -- in pies, often paired with strawberries. But I think the rhubarb's acidity makes it a splendid ingredient in savory dishes, too.

On the shelf in your grocery store, rhubarb looks a lot like celery, except that it's usually a fetching reddish-purple in color. It comes in long, slender stalks, with strings running from top to bottom. To eliminate the toughness of the strings, some cooks peel their rhubarb before cooking. I deal with the issue (and more easily, I think) by thinly slicing the stalks across the grain of the strings.

Given its high water content, turning rhubarb into a sauce requires little more than cooking it. It breaks down quickly and becomes nice and thick.

In my recipe, it needed some counter-balancing sweetness, so -- as a sop to The Husband -- I kept the granulated sugar to a bare minimum in favor of fresh orange juice. By the way, given how quickly this recipe comes together, you do want to make sure all your ingredients are prepped and ready to go before you start rolling.

As for the cut of pork on which we ladle this sauce, I went with the tenderloin instead of its neighbor, the loin. Both are lean, but they call it the tenderloin, after all, for a reason. However, this isn't to say it won't turn out tough and dry if you overcook it, so be sure to keep your eye on the cooking time and let it rest after you've taken the meat out of the skillet.

In the end, this dish made a believer out of The Husband. He even suggested that the sauce might work wonderfully with duck breasts. I'm sure he's right.