Empowerment: A two-week immersion in braille can open worlds of learning for children with low vision and blindness 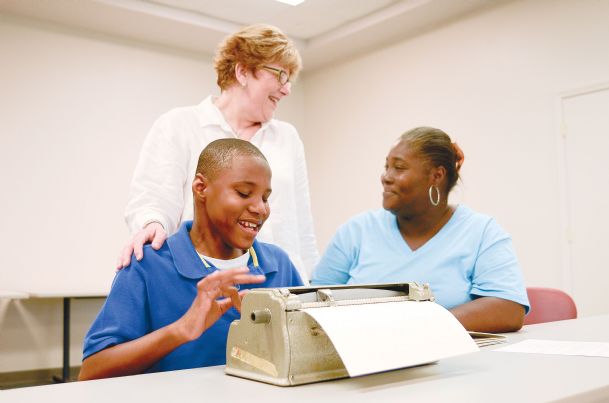 Kobi Cook, 11, practices on the Perkins Brailler, which types the embossed braille alphabet, at the T.K. Martin Center on Mississippi Stateâs campus Wednesday. Wingfield Bouchard, standing behind him, is president of the Mississippi Parents of Blind Children and will help facilitate a two-week BELL (Braille Enrichment for Literacy and Learning) program July 15-26 (weekdays only) at the center. Kobi is the son of Shannon Cook of Starkville, at right, and Derick Cook of Columbus. Photo by: Luisa Porter/Dispatch Staff

Kobi shows off the braille characters he typed.
Photo by: Luisa Porter/Dispatch Staff

"Look at you go, man. You're doing great!" said Wingfield Bouchard, encouraging 11-year-old Kobi Cook. Kobi is blind, but his long, tapered fingers tapped rapidly across the seven keys of the Perkins Brailler. With each stroke, the typewriter-like machine transferred raised dots of the Braille alphabet to a sheet of white paper, creating a tactile document. When the staccato rhythm ended, Kobi held up the sheet and beamed.

The third-grader will have even more to be proud of after he attends the BELL Summer Program weekdays July 15-26 at the T.K. Martin Center on Mississippi State University's campus. BELL stands for Braille Enrichment for Literacy and Learning.

The goal of the two-week program is to provide children 4 to 12, who are blind or have low vision, with a profound immersion in braille and non-visual learning through fun, hands-on instruction. Participants will increase their skills for reading and learn alternative techniques through arts and crafts, games and field trips. The aim is to spark an interest in children to learn braille, and to demonstrate its benefits to their parents.

"The reading and writing of braille is equivalent to the reading and writing of print for a sighted person," said Bouchard, who feels strongly that proficiency in braille -- the ABC alphabet translated to a tactile reading system of raised points --is imperative to the ultimate success of blind and low vision individuals in pursuing eduction, independent living and employment.

Some may think technological advancements in audio learning lessen the emphasis on braille.

"Braille is the written word for someone who is blind or has low vision," Bouchard stressed. "We wouldn't stop teaching a sighted child to read just because he could hear something on audio, would we?"

Bouchard's passion is fueled by the knowledge that about 85 percent of blind children are braille illiterate, according to a 2009 report by the National Federation of the Blind Jernigan Institute. The BELL program was created to help combat those statistics and help youngsters get the necessary instruction so critical to their success.

"It's important to be exposed to braille young," Bouchard said. "We know that the earlier information is presented to the brain the easier it is absorbed."

There is sometimes a perceived stigma attached to the word "blind" because of poor understanding among the general public about the how successful and independent affected individuals can be in society.

Bouchard knows. Her own son and daughter are blind. They each had early training in braille and graduated as seniors of distinction from Starkville public schools. Her son was the first blind member of the Mississippi Lions All-State Band. He now works with Blind Industries and Services of Maryland. Her daughter, who previously lived independently in Paris, has been accepted into a master's degree program at the Sorbonne there. Neither allowed blindness to hold them back.

Unfortunately, the unemployment rate among the blind population is 70 percent, Bouchard said. But of the 30 percent who are employed, 90 percent of those are braille literate.

"We just have to be willing to be objective and open to alternatives, and it has to come from families and educators," she stressed. "It's heartbreaking to me to see a low vision child struggling so hard to read print that their heads are almost on the book when I know how much their lives could be impacted if they learned to read braille."

Through organizations like the National Federation of the Blind, Bouchard and others hope work to educate the public and foster positive attitudes from and about anyone with low vision or blindness, while increasing braille proficiency and life skills.

At "camp," as Kobi likes to call the upcoming BELL summer program he'll attend, he and other children will visit a grocery store, make lunches, work with clay, and touch, brush and ride horses. A world of skill-building and learning activities await. This friendly boy -- who loves school, blues and gospel, his church youth choir, pretending like he's a lion, taking piano lessons and his favorite TV shows, like "Jake and the Never Land Pirates" -- isn't so different from any other kid. He does, however, have to navigate the world around us in a different way. Braille helps him do that.

"Yes, ma'am, it's made a huge difference," declared his mother, Shannon Cook of Starkville. Kobi's early training was from an instructor who came to his home when he was a young child; it continued at the Mississippi School for the Blind in Jackson, where he was a resident for some time. Every advancement he makes in braille opens another window on the world.

"He loves to learn new things and read about other countries, especially Africa. And he wants to learn French," his mother shared. "I learn something new from him every day."

Bouchard and other advocates would love to see all blind and low vision children filled with that same enthusiasm for learning. They firmly believe the BELL summer program can help.

"We want to get past the negative and get to the positive," Bouchard emphasized. "We want to empower low vision and blind children and adults to be independent and positive. We want to change what it means to be blind."

A parent workshop will be held on the last day of the program, to offer families practical strategies to incorporate non-visual learning and braille into their children's daily lives.

Bouchard also encourages anyone interested in issues facing low vision and blind individuals to check out the Golden Triangle Chapter of the National Federation of the Blind, which meets on second Thursdays at 5 p.m. at the T.K. Martin Center. Contact her for more information.

"I'm excited about camp," grinned Kobi at the end of his visit with Bouchard. He politely shook her hand before rising from his chair and reaching for his cane. "I start Monday, so I have to remember to go to bed early the night before. I can't wait."