Art in the Alley: A window on the past augments Catfish Alley's revitalization 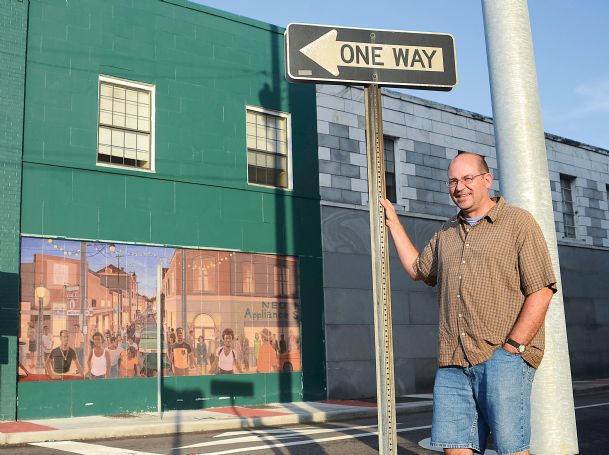 As the sun sets on Main Street in Columbus, Mississippi University for Women Associate Professor of Art Alex Stelioes-Wills is pictured on the corner of Main and the block of Fourth Street South known as Catfish Alley, across from the recently-completed mural he designed and painted with the help of three of his art students. The mural is one of several enhancements to the Alley, including sidewalk improvements, a small park space and a monument expected to be dedicated in August. Photo by: Luisa Porter/Dispatch Staff

The mural is designed to represent Catfish Alley from the 1920s through the late 1960s, when it was at its most vibrant. Buildings, cars and dress âgo back in timeâ as the painting recedes. A likeness in the doorway of the Ned Hardin Appliance Store at right represents the late Sallie Mae Jones, who opened Jones Restaurant in the Alley almost 70 years ago.
Photo by: Luisa Porter/Dispatch Staff

Rebecca McGavock organizes paints and tools for a day of work on the mural in June. McGavock, of Water Valley, is a senior art student at Mississippi University for Women.
Photo by: Chris Jenkins/MUW Office of Public Affairs

There are kids in high school in Columbus right now who don't have any idea about the history of Catfish Alley or what makes it special," said Alex Stelioes-Wills.

The Mississippi University for Women associate professor of art would like to change that. He only recently stepped back from the new mural he designed for that historic block of Fourth Street South in downtown Columbus and declared it "finished."

The vivid scene on the side of the Front Door/Back Door Restaurant at Fourth and Main Streets is one he hopes prods at least a few of those high school students -- and those who come after them -- to ask, to learn, to get to know their hometown's past.

In developing and executing the mural, Stelioes-Wills had to be planner, researcher, mathematician and artist. The project fell to him when a city committee formed to come up with ideas for improvements in the Alley approached MUW to collaborate.

The university's Department of Art has previously lent its artistic talents to a river-themed mural facing the Tennessee Williams Welcome Center on Main Street, painted on the side of Rex's Rentals, and to a skateboard venue at Propst Park, as well as to Market Street Festival.

"I first went to a couple of meetings of the committee to get an understanding of what the whole project is about," said Stelioes-Wills.

The project is an overall facelift for the block-long stretch that was once a center of commerce and social life, especially for Columbus' earlier African-American community. It is said its name was long ago inspired by the aroma of catfish cooking -- catfish that had been caught and brought up the hill from the Tombigbee River nearby.

"At one time the Alley was all the African-American community had to go to," said Ward 5 Columbus City Councilman Kabir Karriem, who serves on the committee. His grandmother, the late Sallie Mae Jones, started Jones Restaurant in Catfish Alley almost 70 years ago; the local landmark is still in operation. "The Alley had a mixture of a lot of people coming in and out, whether they came to eat or to socialize," he noted.

In addition to the mural, other upgrades to the Alley include sidewalks interspersed with sections of red brick, and curb improvements for better accessibility. A pocket park at the south end of the block awaits landscaping and placement of a monument honoring the black men and women who operated businesses on Fourth Street South. A dedication ceremony is tentatively planned for late August.

In trying to capture the essence of the block's history, Stelioes-Wills envisioned an evening scene pulsing with the vitality of the street in its heyday. "I wanted to be sure people got the idea that the Alley was a place that, while it was important in the African-American culture, it was also a place where cultures met," he explained. "It's a fictitious view based on a number of archival photographs." The perspective is from the south end of the Alley, looking north toward Main Street. "It's designed to go back in time," he added.

People in the foreground of the mural are dressed as they might have been in the late 1960s or early 1970s. "As you look down the street, the buildings, cars and dress goes back toward the 1920s," said the art instructor.

Some of the faces looking out from the past are representative of individuals who played a role in the area's legacy. Others are inspired by the photography of Eudora Welty, William Eggleston and Birney Imes.

One face is very special to Karriem.

"I recognized my grandmother right off. It was really emotional to see her in that mural," he shared. The likeness of Sallie Mae Jones, dressed in dark green, is painted in front of the doorway to the Ned Harden Appliance Store. Karriem recently took his mother, Helen Karriem, to see the image.

"If you could have seen the expression on my mother's face when she saw it ... " he said.

"I didn't realize that it would take such a mathematical grid," commented Gerrard, who was working on his first public art project.

Stelioes-Wills originally drafted the mural image on a small scale before creating a grid converting inches to feet. The team worked diligently throughout an almost three-week period, using primarily exterior house paints that stand up to weather and time.

"People would come by and be so excited because they remembered what the street was like in the '40s or '50s," the mural designer recalled. "They'd stop and say, 'I remember ... ' and tell us they had photographs and bring them by. It was kind of a fun part of the process. "

It was a history lesson for the students, too. "I honestly didn't know too much about Catfish Alley," admitted Gerrard. "Most of the knowledge I gained was from people coming by while we were painting. I was interested to hear their stories."

Public art, like the mural, is a vivid way of getting people to remember things about the past, said Stelioes-Wills. If done well, with community involvement and proper research, it can preserve history and trigger good discussion about the past.

Karriem sees Columbus' latest public art as a tribute to trailblazers who paved the way.

"Murals are timeless, and hopefully, when we're dead and gone, people will still be looking at it," he said.

Praising the revitalization of Catfish Alley, as well as his assisting students, the man who designed the mural summed up its ultimate mission: "Through public art like this we can help people tell all those stories and pass them on to the next generations."

2. In the garden with Felder: Gardening with a little help from a four-legged friend COLUMNS