Whole health: Local integrative health coach reminds us 'you are what you eat' 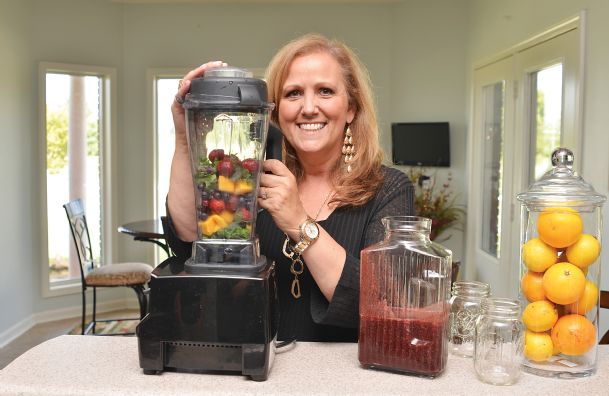 Lacretia Scarboro of Columbus is ready to make a healthy smoothie to go along with her kale chips, energy power balls and gluten-free chocolate chip cookies. The Duke University-trained integrative health coach made changes to her diet and lifestyle in response to a chronic health problem and is now symptom-free. Photo by: Luisa Porter/Dispatch Staff

Fruit and veggie smoothies, blueberry and fig vinaigrette dressings and cookies are among the homemade items Scarboro has offered at the Hitching Lot Farmersâ Market. The smoothies, dressing and flour for the gluten-free cookies were all made in a Vitamix blender.
Photo by: Courtesy photo

Remember when your grandmother passed on that wise adage, "You are what you eat?" No one believes that more than Lacretia Scarboro. She has powerful reasons. For years, the Columbus wife, mother and educator battled a debilitating case of hepatitis C, which she had contracted from a blood transfusion. Her case proved unresponsive to traditional treatments.

Frustrated but tenacious, Scarboro launched her own personal research into alternatives. Today, she is energetic and sympton-free, and credits it to a comprehensive holistic approach to lifestyle changes, especially to her diet.

"Our body really is a temple where our soul dwells, and if we're not aware of the condition of our temple, it can easily slip away to an unhealthy state of being," said the native Texan, who is an English compensatory reading teacher at West Lowndes High School.

The more she learned, the more aware Scarboro became that our health is directly affected by what we feed our cells. She also more fully understood how important the mind-body connection is to achieving optimum health.

In her own home, Scarboro began to focus on whole foods instead of processed convenience foods laden with chemicals. She read labels to avoid genetically modified foods (GMOs) and anything containing growth hormones.

"I went vegan, mainly to avoid antibiotics and growth hormones fed to animals," she explained. "It affected my liver and kept me from healing."

Scarboro took to the farmers' markets and to grocery stores that carry organically grown fruits and vegetables. She borrowed and developed recipes for meals, smoothies and snacks that would strengthen her immune system rather than weaken it.

"If you don't eat proper foods to feed your cells, you're opening yourself up for attack by all kinds of illnesses and diseases," cautioned the educator, who began to be known as the "smoothie diva," a handle bestowed by former students.

Raw fruits and vegetables, juicing and gluten-free foods in her everyday life began to generate results, as did exercise, increased spirituality and guided imagery. Scarboro chronicled some of her experiences and recipes on her blog, lacretiaclarksonscarboro.blogspot.com.

With the passage of time, not only did the lifestyle changes apparently eradicate symptoms of hepatitis C, she was also free of migraines and acid reflux, which she had suffered with much of her life.

She was a believer. Scarboro's enthusiasm for spreading the healthy diet gospel inspired her to share her fruit and veggie smoothies, blueberry and fig vinaigrette dressing, and gluten-, dairy-, nut- and soy-free chocolate chip cookies on several market days at the Hitching Lot Farmers' Market in Columbus.

A life-altering chapter in Scarboro's personal campaign for restored health was a visit to the Center for Integrative Medicine at Duke University, a private research university in Durham, N.C.

"When I walked in I almost wanted to cry," she admitted. "These people were doing what I'd been doing; I wasn't alone."

Duke's program based on its Wheel of Health teaches prevention and intervention, studying how complementary approaches to health in areas such as mind-body connection, nutrition, physical environment and spirituality can integrate with conventional methods.

An integrative health coach might be compared to a personal trainer for the whole self.

Coaching provides an opportunity to collaborate with an experienced partner to work toward the optimal health you envision. It can motivate and support behavioral changes through a structured partnership that thrives on inquiry, personal discovery and accountability

Some who come to Scarboro for help are facing health concerns they want to pay particular attention to -- such as diabetes, obesity, high blood pressure, high cholesterol, smoking addiction or anxiety. Others are coping with illnesses such as lupus, fibromyalgia, gout and even cancer.

Once a patient is diagnosed with an illness or condition and has been advised by their doctor of necessary changes, the majority of people don't know where to begin, Scarboro has observed. Many don't have a support system, or someone who understands what they're going through. A trained health coach can help create strategies for moving toward a goal, identify obstacles, help design a personal health plan, track progress and provide accountability.

"I can't stand to see somebody suffering," said Scarboro. "I wish I'd had someone to guide me on my journey, when treatment was not an option for me. It was a very lonely journey, something I don't want anyone else to have to experience."

It is never too late to make positive changes. Every minute of every day is an opportunity to renew the mindset Scarboro believes.

Every day is another chance to ask yourself, "What have I done today to take care of mind, body and spirit?"

3/4 cup dried figs (or combination of raising and cranberries)

For crumbly base and topping: