Beer-can chicken: Perfect this classic that's actually based on science 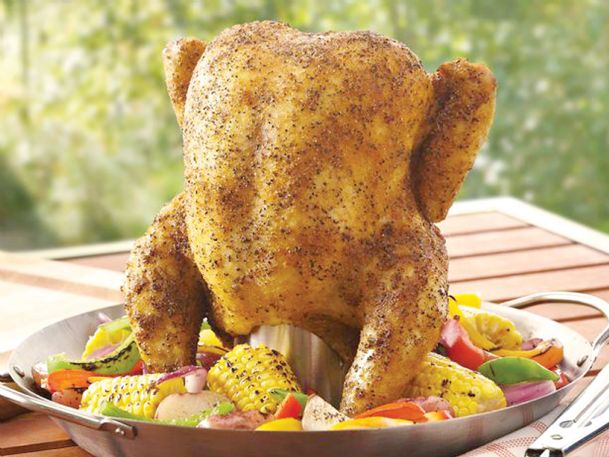 Want a succulent chicken with crispy golden brown skin? Try todayâs recipe for oven-roasted beer-can chicken. You may be surprised to learn you start by emptying the beer can. Photo by: Lawryâs Beer Can Chicken/foodnetwork.com

You may not find too many restaurant chefs plopping their poultry on cans of PBR, but all those tailgaters and beachside grillers are on to something.

There are solid scientific reasons that chicken really does roast better in a more upright, lifelike pose than when it is flat on its soggy back. And by adding a couple of extra prep steps to the technique and taking your care with the temperature, you can get the best of both worlds: succulent, juicy meat and crispy, golden brown skin.

On top of all that, you get to drink the beer. The chicken doesn't actually need it.

All in good time

Beer-can chicken recipes are everywhere on the Internet, but most of them don't address the two biggest challenges of roasting poultry. The first is to avoid overcooking the meat. Nothing is more disappointing than to bite into a beautiful-looking chicken breast only to end up with a mouthful of woody fiber that seems to suck the saliva right out of your glands.

The solution to this first challenge is simple: take your time, measure the temperature correctly and frequently, and choose the right target for the core temperature (as measured at the deepest, densest part of the thigh). When you cook the bird slowly, the heat has more time to kill any nasty bacteria living in the food, so you don't have to cook the heck the out of thing.

The federal government recommends bringing the meat to 165 F for at least 15 seconds. But guidelines issued by the USDA's Food Safety and Inspection Service show that 35 minutes at 140 F achieves the same degree of pasteurization, even in the fattiest chicken.

The roast chicken recipe below calls for several hours in the oven and a core temperature of 145 F to 150 F, which will meet those guidelines as long as you slow-cook the bird at a low temperature. But be sure you use a reliable, oven-safe thermometer and place it properly as directed in the recipe. The tip shouldn't be touching or near any bone.

The second challenge that most beer-can chicken recipes fail to overcome is crisping the skin. Here, liquid is the enemy, and adding additional liquid in the form of a can full of beer is the wrong approach. So empty the can first -- the specifics of that will be left as an exercise for the reader -- and use the empty can merely as a way to prop up the bird and to block airflow in its interior so that the meat doesn't dry out.

Also, give the skin some breathing room by running your (carefully washed) fingers underneath it before roasting. As the subdermal fat melts away, it will trickle downward; a few well-placed punctures provide exits without compromising the balloon-like ability of the skin to puff outward under steam pressure. Held apart from the juicy meat, the loose skin will dry as it browns, especially during a final short blast of high heat in a hot oven.

Done right, each slice of tender meat will be capped with a strip of wonderfully flavored skin, which will be at its crispiest when it emerges from the oven. So have your table ready, and don't be slow with the carving knife. But do take a moment to remove the can before you tuck in.

SLOW-ROASTED CHICKEN ON A BEER CAN

W. Wayt Gibbs is editor-in-chief of The Cooking Lab, the culinary research team led by Nathan Myhrvold that produced the cookbooks "Modernist Cuisine: The Art and Science of Cooking" and "Modernist Cuisine at Home." Their new book, "The Photography of Modernist Cuisine," will be released in October.