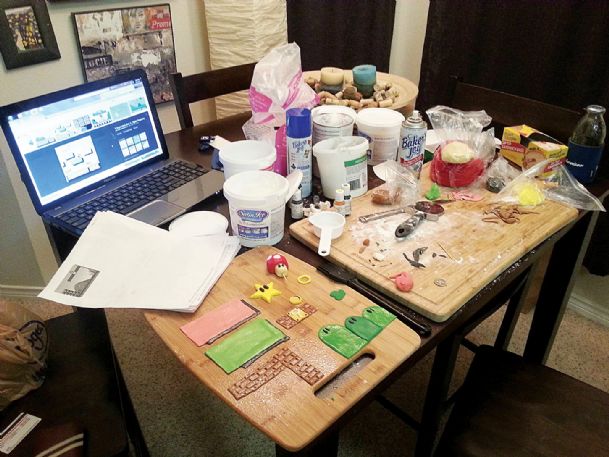 This undated photo provided by Justin Clark shows a baking station with decorations for a Mario Brothers-themed square cake in Dallas. Clark, an amateur baker, typically uses a layer of fondant to cover a simple round cake, and gets creative from there. Shows like Ace of Cakes, Cake Boss, and various spinoffs tempt viewers with stunning visions of creations closer to art than dessert. This is the era of 3-D baking, and the simple, square birthday cake is little more than a remnant of the past. Photo by: AP Photo/Justin Clark

If you're planning to bake a cake for your child's upcoming birthday party, you might want to ask yourself one question: "What would the Cake Boss do?"

Because if you think a basic sheet cake and candles are all you need, you clearly haven't been paying attention. Extreme caking has come to the home cook, fueled partly by TV shows showcasing crazy confections, and partly by boastful amateur bakers eager to strut their sugary stuff on social media.

Shows like "Ace of Cakes," ''Cake Boss" and various spinoffs tempt viewers with stunning visions of creations closer to art than dessert. They build cityscapes, sea monsters and dragons -- all sculpted like statues in three dimensions. Amateurs follow suit, posting photos of their creations to Twitter and Reddit, and the more elaborate the cakes are, the more popular they become.

This helps explain why once esoteric pro-grade tools and ingredients for creating elaborately embellished cakes -- not to mention classes on how to use all those toys -- are big sellers today.

In Philadelphia's Italian Market, kitchen supply store Fante's has been teaching cake decorating to amateurs for at least 30 years. The supplies they sell and classes they offer are constant indicators of cake trends. During the early '80s it was marzipan and fancy flowers; today it's 3-D and fondant, an icing that can be sculpted.

"There was a huge shift as soon as the TV shows came out," says Nina Rose Pelc, an instructor at Fante's. "I've seen some three-tiered, five-tiered cakes -- that could be wedding cakes -- for 3-year-olds' birthday parties."

According to Lynn Sorensen, co-owner of Kitchen Krafts -- a website that sells baking tools and materials -- the number of vendors selling specialty tools and ingredients for building these cakes has increased as demand for them has risen.

She says the cakes people want to build can change by the week, depending on popular movies or events. When the royal baby was born, for example, Sorensen said people wanted decorative crowns.

The Cake Boss himself, Buddy Valastro, said in a phone interview that he's happy to have raised the cake-decorating bar.

"I'm a proponent of people making those kinds of cakes, trying to make the cakes that I make," Valastro says. "At the end of the day, the reason I became a baker is that when you finish a cake and you step away, there's a feeling inside. You're like, 'Wow!' And I want to give that feeling to other people."

When Joshua Orvis, a research scientist from Tulsa, Okla., started getting into extreme caking along with his wife, it was for their son's third birthday.

He searched Google Images for Angry Birds cakes, unsure of what would turn up. Hundreds of colorful cakes tiled his screen depicting the game's scenes and characters in varying levels of complexity.

"Then we found out you can get fondant and just make whatever you want to make," Orvis says. "Like a kid with Play-Doh, we just sculpted shapes out of it."

The Angry Birds cake was a success. The Orvises have since sculpted a variety of special cakes for their four young children: one of Pingu, the clay-mation Swiss-British penguin, one of a "Star Wars" scene, and two of cars. The most recent cake was a Pagani Zonda R race car for which Orvis used traditional cake, Rice Krispies Treats, and fondant for the body paneling.

The Orvises find the cake-making process rewarding, not just for the joy it brings their children, but also for the creative outlet.

"Both of our jobs are not very artistic, but we both think that we're relatively artistic people," Orvis says. "It's a fun thing to do together."

Unfortunately, not every foray into elaborate cake making goes so well. Katie Lewis, a 32-year-old web designer from Washington, D.C., has given it up entirely.

When a friend asked her to make a cake for his wedding, Lewis had a few elaborate cakes under her belt. There was a gory fondant chest cavity with a red velvet heart for one Halloween, and a tasty alien head for another. But now she'd entered the big leagues: a three-tiered, three-dimensional, Mario Brothers-themed wedding cake.

Lewis started preparing the cake the night before the wedding, and it wasn't working out. As the hours went by, she realized that she'd taken on something too big. She didn't have the right tools or the right training.

"At one point I was lying on the floor just covered in confectioner's sugar," she said.

By morning, Lewis managed to put together something that "kind of appeared to be some sort of cake," but has never looked back. She doesn't watch shows like "Cake Boss" anymore.

"It's not possible and it makes you cry," she says.

There is, however, a middle ground between baking a work of art and producing a boring, traditional cake. Some amateurs simply use a layer of fondant to cover a traditional round cake and get creative from there.

And at Fante's, Pelc says the classes that focus on baking basics remain among the most popular.

"We will always have an interest in using the traditional butter cream approach," Pelc says. "Those are fundamentals people will always want to learn."