Village north of NYC has deal for the right chef 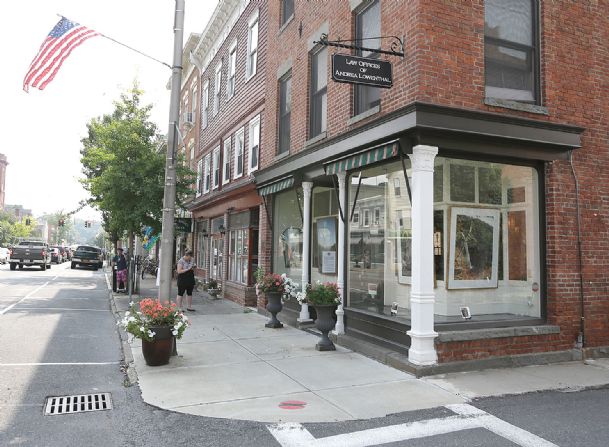 A vacant restaurant is seen on Thursday in Catskill, N.Y. Locals looking to land a buzz-worthy, foodie-friendly restaurant in this Hudson River village are offering the right chef the Main Street space free rent for a year. The new restaurateur would have to pay for some capital improvements to get the free rent. Photo by: AP Photo/Mike Groll

CATSKILL, N.Y. -- Locals looking to land a buzz-worthy, foodie-friendly restaurant in this Hudson River village are offering the right chef a novel deal: Come to Catskill with a killer concept -- maybe farm-to-table, gastro-pub or vegetarian -- and get space on Main Street rent free for a year.

The hope is the right restaurant will give the growing number of downriver arrivals from New York City an attractive place to eat. And maybe it will accelerate the kind of gentrification that has revived other river towns.

"I don't know what the actual spark will be, but I certainly think this will help ignite whatever's going to happen," said Nina Sklansky, who belongs to a local group promoting Catskill as a funky, affordable place. "If people are going to linger, they're going to want to eat."

Catskill, on the west bank of the Hudson about 100 miles north of New York City, has a movie house with a marquee on Main Street along with a columned courthouse and places to window shop. With an average family income of $55,000, the village has kept its humble roots. But like a lot of corners of the valley, the village of 4,000 is changing as city people migrate north or buy second homes.

In the last year especially, local real estate broker David King said he has noticed more 30-something couples with toddlers from Brooklyn. Meanwhile, there are plans to convert an old commercial site into a haven for artisans.

If Catskill is showing green shoots of gentrification, it's nowhere near the full bloom on display across the river in the city of Hudson. The once-tumbledown city is today is loaded with antique shops, art spaces and, yes, the sort of restaurants that get described glowingly in The New York Times as "a fever dream of luxury and rural kitsch."

"God forbid if the place turns into something like Hudson, but a little bit of it would be nice," Sklansky said.

Sklansky, a copywriter who moved upstate a decade ago, is working on a privately funded marketing campaign for the village with a group of like-minded residents called the Catskill Action Team. She helped cook up the restaurant offer this summer.

Team member Andrea Lowenthal is offering the deal on the ground floor of a building she owns on Main Street, the site of an old luncheonette with a black marble service counter and art deco fixtures. The new restaurateur would have to pay for some capital improvements to get the free rent.

The two women said that they're open to different cuisine concepts, but that a chef with experience is necessary.

To get the word out, they posted an online video promising "we've got lots of foodies hungry for something great to eat."

"There are many people who would like a choice between Chinese and pizza," Lowenthal said.

There have been more than a dozen nibbles so far, including people from New York City. But they have yet to find the right chef.

Two potential takers are 2010 Culinary Institute of America graduates Allyson Merritt and Andrew Spielberg. Merritt said they moved to Catskill a little over a year ago "to be close to Hudson" and are considering whether Lowenthal's building is the right spot to pursue their dream of a local-oriented cafe.

"I love the history of the building; it's amazing," Merritt said. "We can definitely see our concept fitting into this space, with possibly some changes."

Catskill already has a bunch of restaurants from Italian to Thai, and not everyone thinks one more is needed.

Peter Di Stefano of Di Stefano's New York Barber Shop wished the local group luck. But he also took time out from giving a customer a buzz cut to show off a nearby stack of menus from local restaurants like Natalie's Nook, La Casa Latina and A & G Texas Weiners.

"We have wonderful restaurants," he said. "What they should be doing is promoting the restaurants that are here."

Village Board President Vincent Seeley said they want to bring in a restaurant that will draw people -- and their money -- from far away.

"They're out there," Seeley said. "We just have to find the right people that want to make that kind of investment in the village."