A 'bear ministry' unites communities and sends smiles around the world 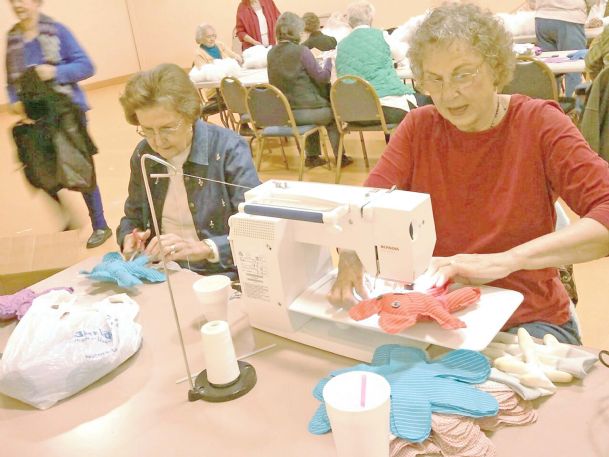 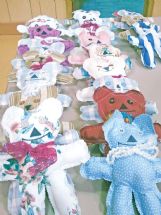 These handmade bears are ready to head to Atlanta, to be added to Operation Christmas Child boxes.
Photo by: Courtesy photo/Gwen Sisson

What stands about 7 inches high, sees the world through little button eyes and will soon travel thousands of miles around the globe? Handmade Teddy bears -- more than 2,500 of them, lovingly created in a small country church in North Mississippi.

Once a month, ladies faithfully gather at Lollars Grove Baptist Church in Eupora. They bring portable sewing machines, covered dishes for lunch and a willing spirit. It's been going on since February 2010.

The object is to make small, stuffed bears to help fill Operation Christmas Child (OCC) shoeboxes -- to send smiles to children who have little, to help open doors to share the gospel.

Ann Stone coordinates this great bear affair. She's a member of Mantee Baptist Church and serves as Women's Missionary Union president of the Webster County Baptist Association. She's been involved with OCC for more than 10 years. The Samaritan's Purse ministry, under the leadership of Franklin Graham, collects and distributes shoebox-sized containers holding simple toys, hygiene items and school supplies to children in more than 150 countries. Along with the 30,000 or so gift-filled boxes turned in at the OCC Collection Center in Columbus during National Collection Week each November, containers and bears from Lollars Grove all go to the Southeast Regional Collection Center in Atlanta.

As she has for several years, Stone traveled to Atlanta soon after Thanksgiving -- with 2,568 bears -- to help an army of volunteers process boxes.

"Once you go (to Atlanta), you just can't wait to go back. It's such a blessing," she said. "There are probably people from half a dozen states there volunteering."

At that center, every box has to be inspected. Occasionally, something must be removed, such as liquids, chocolate that would melt or anything perishable or breakable. Bins on each table hold items to replace anything taken out. "And sometimes a box isn't really full, and we want to add something to it," said Stone.

That's where the bears come in.

Stone and a fellow volunteer were inspired by similar stuffed toys they saw while processing boxes in late 2009. They brought the idea back to Mississippi.

"When we first started, it was just three churches, then a fourth came in, and now we've added several more," Stone said.

The group meets at Lollars Grove Church, but the volunteers come from churches throughout Webster and surrounding counties to cut, sew and stuff with mostly donated fabric, ribbon, buttons and filling.

There is plenty of laughter and joy, said Elizabeth Weddle. "We have a good time, a really good time."

Her husband, the Rev. Willy Weddle, is pastor at Lollars Grove. He remembers when he first saw the bear "assembly line" in action about three years ago.

"I was so impressed. It is absolutely one of the neatest things," he remarked. "Not only are they providing a great ministry, but they love what they're doing. And I mean, they've got this thing organized; it's down to a science."

Like the others who meet monthly, Ann Harrison's heart is touched by Operation Christmas Child and its mission. The Lollars Grove member is a regular volunteer at the North Mississippi Health Services longterm care facility in Eupora and enlisted the assistance of a few residents. One of them is JoAnn Ballard. Although bedridden, Ballard is a prolific stuffer of bears.

"I can't get up and move, but I love doing it for the kids," Ballard said via bedside phone. This mother of five, grandmother of six and great-grandmother to five children continued: "You've got to have a heart for the kids. If something happens to all of them, there's no world left. They're so precious when they smile or when their eyes just beam up when they're happy."

Harrison commented, "JoAnn is so sweet about it. She says that every bear she looks at makes her think that there is some child somewhere that will enjoy it."

December is the only month the bear brigade does not meet. But come Jan. 15 at 9 a.m., they will be back at it, readying more stuffed toys for next November's OCC boxes. After turning out more than 2,500 this year (2013's total was just above 1,700), everyone is expectant about the number of bears they will send to Atlanta at the end of 2015.

" ... I think it's the feeling of helping, and of making children happy," Elizabeth Weddle said. "Franklin Graham puts a post on Facebook almost every day showing a child receiving a box. Just look at that face -- it's a happy face."