Welcome to Middle-earth: Step into one professor's fascination for Tolkien's world 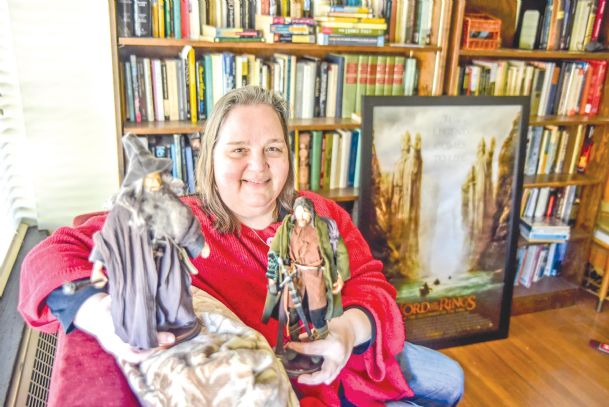 Dr. Leslie Stratyner is pictured in her office at Mississippi University for Women with two figures from her collection of J.R.R. Tolkien characters. The professor of English and Anglo-Saxonist teaching a Life Enrichment Program (LEP) course on âThe Hobbitâ and âThe Lord of the Rings.â Photo by: Luisa Porter/Dispatch Staff

Dr. Leslie Stratyner talks Tolkien to an engaged group of class participants Tuesday. From left, in front, are the Rev. Muse Davis, Hal Bullock, Dr. Saul Vydas and Pam Bullock. Behind them are Jo Shumake, Presley Hutchens (in back) and Janice Fulton. âWe wanted to get the literary aspect,â says Pam Bullock, who first read the books in the 1980s. âAnd weâre watching the movies again to compare to the books, which weâre in the process of re-reading. Iâm looking at it all now with new eyes based on what weâve learned in class.â
Photo by: Luisa Porter/Dispatch Staff

The campus is quiet on a Tuesday evening, dusk closing in on shadowed sidewalks leading to Painter Hall. Inside the venerable building at Mississippi University for Women, almost nothing stirs, only a lone student putting in work after hours. Flyers dot bulletin boards in this setting typical of many a college at the end of the day. It's at the top of the stairs, to the left and down a short, inconspicuous hallway, that things become more extraordinary.

Dr. Leslie Stratyner's office gives her away. Not just the framed Middle-earth posters on her walls, but the glass-front case filled with figures from J.R.R. Tolkien's "The Hobbit" and "The Lord of the Rings." There's Strider, Arwen and Elrond, the Lord of Rivendell. And the great wizard, Gandalf. They resemble the actors who portrayed them in contemporary movies, but the faces only represent characters that were real to Stratyner years before director Peter Jackson thought to interpret them on the big screen.

Stratyner is an Anglo-Saxonist (one who studies the literature of England before 1066), and a confirmed Tolkien devotee and scholar. The late author's epic fantasies are as familiar to her as the route to work. Reading them as a teen even inspired her choice of career. The MUW professor of English, with published essays on Tolkien, currently shares her insight in a weekly Life Enrichment Program (LEP) class at the university.

Near 6 p.m., those who have signed up for the six-session, non-credit course begin to top the stairs. There is a priest, a riding instructor, a psychiatrist, an educator and former ambassador among them, each there for reasons of his or her own.

"In general, we don't get a chance to discuss good literature that frequently, and this is an opportunity to do that," says class participant Dr. Saul Vydas, describing Tolkien's work as "probably the best of a generation."

"'The Hobbit' is considered Tolkien's greatest accomplishment as a fiction writer, and one of the greatest works of fantasy," Stratyner tells the group, before delving into an overview of interwoven stories of good and evil, moral and immoral.

"This is a quest narrative, but not a classic quest, where characters are setting out to find something," she explains of the book published in 1937. ("The Lord of the Rings" was published in 1954.) "It's a reverse quest, it's to get rid of something."

The something is the "one ring," an object that tempts according to one's nature. At the story's center is an atypical hero. Frodo is a small, meek, home-loving hobbit whose journey sweeps the reader into a layered mythological world created in Tolkien's mind.

"You can read it when you're 15, and 30 reads later, you're still discovering things," says Stratyner. "In Tolkien, nothing is incidental; even if you can't see it, there's a story behind it."

For the next hour or more, themes and patterns, motivations and meanings are touched on. Connections between Tolkien and C.S. Lewis, the influence of "Beowulf," and Tolkien's devout Catholicism come up.

The Rev. Muse Davis of the Oktoc community is priest in charge of St. David's in Mayhew, part of the Anglican Catholic Church. He hopes to gain insight into Tolkien's Christianity through the class. His friend, Presley Hutchens of Brooksville, once initially dismissed the books as simply fantasy, but now has new appreciation for Tolkien's depth. He hasn't seen any of the movies.

"She (Stratyner) talks about characters and puts them in a sort of perspective that it would be difficult for me to pick up on my own," he says. "I didn't realize so much of his writing was so tied into Anglo-Saxon, and she's one of the few people who know so much about that."

Janice Fulton has seen all the movies but had not read the books in high school or college.

"I started to read them, in the correct order, and I've discovered them to be more complicated than the movies. The journey goes in so many different directions." The Brooksville resident is gaining an understanding of Tolkien himself and how his life shaped the characters and storylines. "It would be interesting to know what Tolkien would think if he could sit in on the class."

Jo Shumake has read Tolkien's works several times but never studied them. "This is the perfect opportunity to explore the epic sweep of the action, the complex characters, the still very relevant themes of good and evil, sacrifice and redemption," she says.

To Stratyner, the writer's depth and breadth of imagination are inspiring, especially when taken in context with his life.

"Here was a busy man who lived a very practical life, with a wife and several children, suffering the same sorts of minor and major traumas many of us do, from occasional money difficulties to serving at the Western Front in World War I. Yet he had the inclination to build this incredible, storied world that has not been equaled before or since in fantasy fiction."

She calls Tolkien a "profoundly humane writer," able to perceive, as he calls it, the damaged good in the corrupt.

In his wide scheme of things, even orcs and Sauron are deserving of some compassion, the professor explains. "Middle-earth is not a black and white world. It is a world where, as Elrond says, 'nothing is evil in the beginning,' and meaning is derived from the free choices we make, both good and bad."

When class concludes, Stratyner gathers her things, ready to head home to her architect husband, John Poros, and Isadora, her 12-year-old daughter -- whose middle name is Arwen. But even amid the everyday, her thoughts are often on a time "between the dawn of faerie and the dominion of men," and the complex writer who set the bar so high for fantasy fiction.

1. The care and feeding of ghosts and goblins FOOD