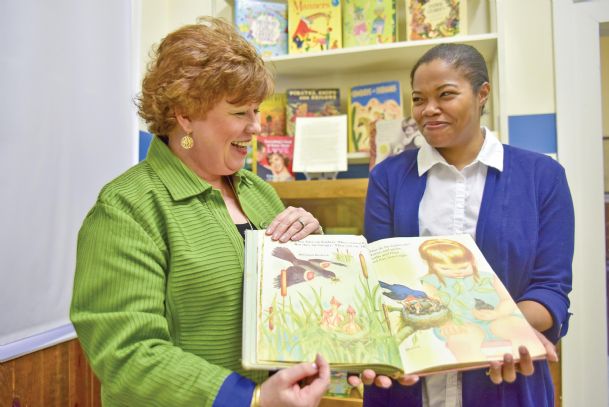 Oktibbeha County Heritage Museum board member Hellen Polk, left, and museum volunteer Shamera Brumfield look through âBirds,â a 1958 Little Golden Book by Jane Werner Watson, with iconic illustrations by Eloise Wilkin. Polkâs collection of Golden Books is at the museum through mid-March. The books introduced in 1942 are a touchstone for generations of readers. The Smithsonian Institution includes Little Golden Books and artwork in its Division of Cultural History. Photo by: Luisa Porter/Dispatch Staff 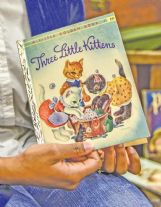 âThree Little Kittensâ is the oldest book in the collection, published when Little Golden Books launched, in October 1942.
Photo by: Luisa Porter/Dispatch Staff

Little Golden Books are throughout the Starkville museum, placed with related exhibits â like these books about firefighters with a kid-sized fire truck.
Photo by: Luisa Porter/Dispatch Staff 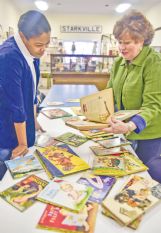 âDoctor Dan the Bandage Manâ came with band-aids in 1950, the first Golden Book to have items inside, said Hellen Polk.
Photo by: Luisa Porter/Dispatch Staff

Many Little Golden Books are about animals. These are displayed with a wildlife exhibit at the museum.
Photo by: Luisa Porter/Dispatch Staff

Time travel is often just a matter of a scent, a sound, a sight. Take the sight of a familiar gold foil spine on a Little Golden Book, maybe one with three little kittens or a feisty tugboat on the cover. Or cherubic, plump-cheeked children or a saggy, baggy elephant. These are among about 75 "little golden treasures" that are taking visitors to the Oktibbeha County Heritage Museum back in time, all the way to their childhoods.

The Starkville museum, a treat to tour on any given day, currently hosts an exhibit of Little Golden Books, courtesy of museum board member Hellen Polk, a former preschool teacher and longtime academy principal. The educator's own collection of the iconic books greatly expanded this past year when a dear aunt, also a teacher, passed away and her books came to Polk.

"It was four boxes of books!" the vivacious Starkville resident said. "When I got to looking at them, I saw that quite a number of them were first editions and that they were just really special."

Special, indeed. The display includes an original "Three Little Kittens," published Oct. 1, 1942, as Simon and Schuster Co. (in cooperation with the Artist and Writers Guild Inc.) launched Little Golden Books and changed publishing history. For the first time, children's books were of high quality and low-priced. At 25 cents each, they were available to all children, not just a privileged few. They were sold in grocery stores, the five-and-dime and corner drug stores instead of only in bookstores. They were more durable, stitched vertically down the spine rather then being stapled in the middle, as children's books had been. And with their distinctive gold spines, they looked positively elegant lined up on a shelf.

In spite of the shadow of World War II and looming paper shortages, the books were an instant success story, with 1.5 million copies printed within the first five months. The kittens, and other stories like "The Little Red Hen" and "The Poky Little Puppy," helped transform children's reading habits in the early 20th century.

In Hellen Polk's home, one book was becoming a touchstone.

"'Good Night, Little Bear' was a Little Golden Book my dad read to me as a child," smiled Polk, almost reverently turning the pages of the 1961 book at the museum. "He and I both loved chocolate cake, and in this story the little bear gets chocolate cake from his dad."

When Polk had a son of her own, she read the well-known stories to him as well. "Scuffy the Tugboat" was one of his favorites.

Museum volunteer Shamera Brumfield remembers "The Saggy Baggy Elephant." "But I didn't get really into Little Golden Books until I became a mama," she said. "My children are 6 and 8, and although they're reading themselves, I still ask them if I can read to them."

Like Polk and Brumfield, adults everywhere are nostalgic about certain titles or characters. Like online reviewer Linda Bulger, who told of a dinner party where "Golden Legacy: How Golden Books Won Children's hearts, Changed Publishing Forever, and Became an American Icon Along the Way" was on the coffee table. The 2007 publication celebrated Golden Books' 65th anniversary.

"It was on the coffee table for about 30 seconds," she wrote in 2008. "All evening it went from hand to hand, with squeals and sighs following it around the room."

Can you find it?

At the museum, the colorful books are imaginatively placed near appropriate exhibits. "Doctor Dan the Bandage Man" is in the Eckford Clinic section, which features the original doors of "the town doctor's" offices.

"That was the first book to come out with something in it; it had band-aids," noted Polk. Other books would go on to have story-related items inside, like a jigsaw puzzle or stamps.

"Our Flag" is with the military exhibit. "Five Little Firemen" and "Firemen and Fire Engines Stamps" are atop a child-sized fire truck. "Smokey the Bear" sits at the clawed feet of a towering black bear mount on loan from Bill Poe.

Books about aviation, machines, even a shoemaker, are cleverly situated in just-the-right spots. Museum volunteers have even devised a scavenger hunt for youngsters, encouraging them to explore the exhibits as they locate certain editions.

Famous writers and illustrators have worked on the books, notably Margaret Wise Brown, who also wrote "Goodnight Moon." Her Little Golden Books were often illustrated by Garth Williams, most famous for his illustrations for "Charlotte's Web," "Stuart Little" and the Little House series.

"The art in these books is really just fascinating," said museum volunteer Joan Wilson. "Little Golden Books are just part of many of our childhoods; so many people have grown up reading them. The stories are just very nice, comfortable stories that all of us can relate to.

Realizing that, author and longtime Golden Books editorial director Diane Muldrow published "Everything I Need to Know I Learned from a Little Golden Book" in 2013. The humorous "guide to life" for grown-ups reflects that there are few real-life situations the more than 70-year-old line of children's books hasn't touched on.

Its pages are filled with memory-stirring illustrations from books from the 1940s, 1950s and 1960s. They accompany succinct tidbits of wisdom --like "Stargaze" with a whimsical Garth Williams illustration from 1954's "The Friendly Book" or "Steer clear of shady characters" with Richard Scarry's 1960 art for "Chicken Little."

There is more Little Golden wisdom. Like "Get some exercise every day," "Stay curious," "Cultivate contentment," "Learn to cook and clean," "Be proud of your country," and "Believe in Santa Claus, love at first sight and that your ship will come in ... "