Kid power: This preteen discovered cooking is cool -- so is being on national TV 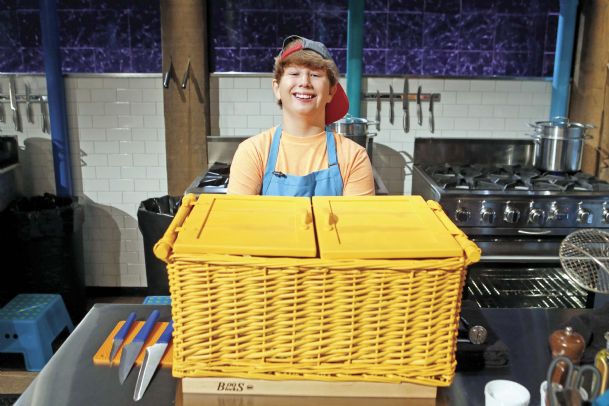 Mark Coblentz of Starkville, 12, is pictured in the âChopped Juniorâ kitchen in New York City in August. The Armstrong Middle School seventh-grader is a contestant on the new Food Network showâs episode to air Tuesday, Nov. 10 at 7 p.m. Central Time. The Armstrong Middle School seventh-grader is the son of Robbie and Bonnie Coblentz. Photo by: Food Network/Courtesy photo

Mark Coblentz of Starkville is third from left in this lineup of contestants on the New York set. The others hail from California, New Jersey and Texas. The young cooks have remained in touch since the filming.
Photo by: Courtesy photo 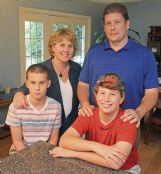 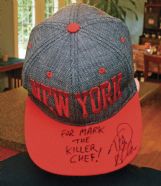 It's a late Monday afternoon, and Mark Coblentz is hungry. Sporting his lucky cap, the seventh-grader moves between refrigerator and kitchen cabinet with the sliding glide preteens tend to perfect. As he builds an after-school snack on the fly, he maintains running commentary on sauteing vegetables or prepping a rack of lamb in red wine herb marinade like a culinary veteran. But Coblentz is all of 12 years old. Even so, he will make his national television debut Nov. 10 on the Food Network's new show "Chopped Junior."

Homemade chicken pot pie and a robust dose of confidence landed the Starkville youth a spot in the competition and a trip to New York, where the episode was filmed in August.

In this spin-off of the popular show "Chopped," four junior contestants square off each week. They are tasked with preparing three dishes -- an appetizer, entree and dessert -- in progressive rounds, using ingredients found in a mystery basket, however unlikely those ingredients may be. At the end of each course, a panel of judges "chops" one chef. The last cook standing takes home $10,000.

Mark admits he may have been a little nervous as filming began, but that didn't last long. He had too much to think about. Once presented with a mystery basket, participants had only 30 minutes to whip up the assigned dish.

The whole family made the journey to New York: Mark, mom and dad Bonnie and Robbie Coblentz, and Mark's brother, David, 14. Robbie accompanied Mark to the TV studio each day, where contestants' parents figuratively bit their nails watching on a green room monitor as their sons and daughters cooked under pressure on set.

Just how does a middle school football player and avid hunter in Mississippi end up in the Big Apple on national television?

It all began, Mark says, when he was about 6 years old, helping his grandparents make homemade rolls. Before long, Bonnie "forced" him to attend a few cooking camps, he adds with a lop-sided grin. It seems Mom knew what she was doing.

"When I was 10, I decided I really wanted to learn how, so I started watching Food Network," explains Mark. He became a real fan of chefs such as Alton Brown and Guy Fieri. He studied the dishes and searched out other versions, writing out recipes by hand and adapting some of them as he went.

"Mark likes to experiment," smiles Bonnie. "I've bought some strange ingredients because he wants to test them."

This past spring, Mark submitted a cooking video filmed by his father to audition for the premiere season of "Chopped Junior." His skills, personality and chicken pot pie caught the eye of producers.

For a time, he was juggling getting in shape for the cook-off and his football season simultaneously. He loves both activities. Mark immersed himself in cooking shows and practiced at home with mystery ingredients his mom provided. He's been the recipient of some expert advice.

"Chef Ty Thames of Restaurant Tyler has mentored him in the kitchen, and Chef Leon Jefferson at Central Station Grill was kind enough to let him cook with him," Robbie explains.

When presented with the first mystery basket on set, Mark had to think fast on his feet, especially when faced with components like pickled pigs' feet and beet hummus he was required to use in his appetizer.

"We had no recipe books, only things we could think up," says the preteen.

Bonnie jokingly interjects, "I would have cried and quit."

The family cannot reveal in advance how the episode airing Nov. 10 turns out, but the adventure has left Mark eager to do more. His fervor is fueled.

"I'd like to go on a culinary tour of Europe, and I'd like to have restaurants all over the country, including a high-end Southern restaurant," he says, brushing pesto on the Mississippi catfish destined for supper that night. "Oh, and I'd like to retire at 21 on a few thousand acres and hunt all day," he adds, flashing his laid-back, trademark Coblentz grin.

KNOCK YOUR SOCKS OFF DONUTS

Salt and white pepper, to taste