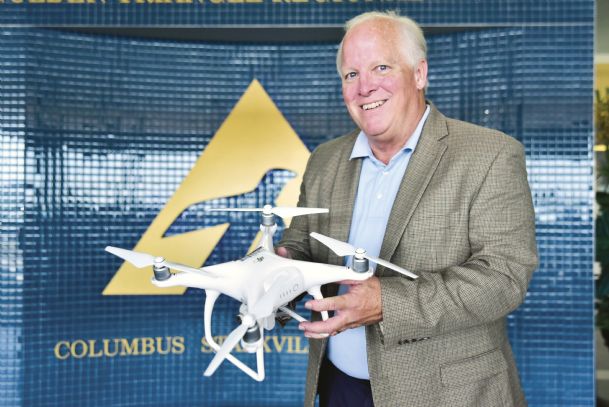 Golden Triangle Regional Airport Executive Director Mike Hainsey holds a quadcopter Thursday at the airport. The drone, or UAS â unmanned aircraft system â derives the name from its four rotors. GTRA and Columbus Air Force Base are partnering to spread the word about guidelines and new regulations that affect the drone-flying public. The quadcopter is on loan from Mississippi State University, which is designated as a National Center of Excellence for Unmanned Aircraft Systems by the Federal Aviation Administration. Photo by: Luisa Porter/Dispatch Staff 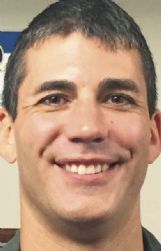 There was a time when the word "drone" had a lot more to do with bees than with multi-rotored flying robots. Today, however, America exhibits all the symptoms of a raging case of drone fever. The surge signals no less than a new era in aviation.

Estimates are that nearly one million consumer drones -- or UAS, which stands for unmanned aircraft system -- were sold in the U.S. last holiday season, and commercial and recreational momentum keeps growing. While the figures are encouraging for drone manufacturers, they can be worrisome for the Federal Aviation Administration (FAA) and everyone else concerned about the safety of American airspace. That includes the two largest users of Golden Triangle area airspace -- the Golden Triangle Regional Airport and Columbus Air Force Base. GTRA and CAFB have partnered in an effort to educate current and potential drone flyers on how to safely share that air with manned aircraft.

"The technology has far outstripped the regulations," said GTRA Executive Director Mike Hainsey about the rapid rise in drone interest and the government's effort to get measures in place to help avoid mid-air collisions. Since early 2016, Hainsey has presented several public drone seminars, including one Sept. 13 for Mississippi University for Women's Life Enrichment Program.

"For us, it's a grassroots effort to educate the owners of unmanned aircraft," the airport director said. "There are rules and regulations out there and a structure about where aircraft should be flying, and if somebody with a drone doesn't know them, then we run the risk of having a problem."

Unmanned aircraft come in all shapes and sizes and are transforming industries from agriculture to filmmaking. They are serving as new tools for search-and-rescue, inspecting miles of railways and pipelines, searching out blight in crops or forests and spotting wildfires.

"They can do tremendous things as far as aerial photography -- for surveying crops, for disaster relief, toxic spills ... We have barely begun to explore that," Hainsey said.

"We don't want to overshadow the tremendous capability they can have but just want operators to understand that there are rules it is the operator's responsibility to abide by, for everyone's safety."

At Columbus Air Force Base, Lt. Col. Nathan Smith is the 14th Flying Training Wing Chief of Safety. A near mid-air collision in November 2015 between a UAS and a military aircraft near Moody Air Force Base in Valdosta, Georgia, brought the issue to the forefront

"It can be catastrophic to the manned airplane, depending on where that drone hits the airplane," Smith said. Drones could go through a windshield, go down an engine or structurally damage the wings, Smith said, citing examples of potentially dangerous strikes. If sparrow-size birds are capable of FOD (foreign object damage) to a jet aircraft engine, drones with a battery, metal composite material and plastic could also have devastating consequences, the chief of safety emphasized.

Chesley (Sully) Sullenberger, the retired U.S. Airways captain who landed a jet on the Hudson River after geese knocked out both of the plane's engines, has also warned of the need to find ways to avoid accidents.

"The sheer numbers concern me, as they increase the risk of a collision, and it is likely that the actual number of drones is much greater than the number registered," he said in a Feb. 8 article in USA Today.

Anyone owning a drone weighing more than 0.55 pounds (just over two sticks of butter, says the Aviation Administration) must register it with the FAA before flying the aircraft. Since the requirement was established in December 2015 more than 500,000 UAS have been registered, FAA Administrator Michael Huerta told his audience in a speech at the White House Aug. 2.

In a significant move on Aug. 29, the FAA unveiled its first regulations for the routine commercial use of small drones. Its Small UAS Rule, or Part 107 as it is often referred to, went into effect. The complete rule is available at faa.gov/uas/.

In short, Part 107 allows UAS weighing less than 55 pounds to fly in sparsely occupied areas, up to 400 feet high, and up to 100 miles per hour during the day. The rule is designed to allow commercial or non-hobbyist drone operations while minimizing risks to other aircraft, as well as people and property on the ground.

Highlights of the rule include requirements that operators must test for and receive a remote pilot airman certificate with a small UAS rating, and only operate the drone when able to maintain a visual line of sight, or VLOS, with it at all times.

Part 107 is what brought Columbus businessman James Williamson to the recent talk Hainsey gave at MUW.

"I wanted to learn all I could about the 107 rule. My main purpose for having a drone is for surveying my crop, which is land and timber," explained Williamson. He hopes to be able to fly a UAS above timber stands to inspect for signs of infestation or other problems. The VLOS stipulation may prove to be an obstacle, but waivers may be applied for in specific circumstances after an operator has taken the certificate test ($150) and passed.

Nevertheless, Williamson thinks the new regulations are a good thing.

"I'm glad to see the FAA getting some rules in place, and I commend Mike Hainsey for being there for us," he remarked. "We have a line of communication with him, and he said he is there to answer any questions."

Even in the earliest stages of learning to operate his drone, Williamson said he has been diligent in notifying the nearby Lowndes County Airport on Highway 69 South that he is flying, as is required. Hobbyists or recreational operators wanting to put up a drone within five miles of any airport are to provide the airport and air traffic control tower with prior notice. That also applies if operating near a helipad, such as those at hospitals including Baptist Memorial-Golden Triangle, Hainsey and Smith pointed out.

Chris Jenkins attended the same talk Williamson did. As photographer and video producer for MUW, Jenkins will use the university's UAS for aerial photography of everything from softball fields to maintenance trouble-shooting for campus buildings.

"I've downloaded all the study material for the Part 107 test, and as soon as I feel comfortable with it, I'll take it," he said.

Hainsey and Smith stress that current and would-be drone operators should study the FAA website to understand all regulations and the delineation between hobbyist or recreational flyers and non-hobbyists.

"Most important for hobbyists is the requirement to notify an airport if they're operating within five miles of anywhere manned aircraft are taking off from," Smith said.

If the drone's purpose is commercially-oriented, Part 107 takes affect, and "it's no longer a notification, it's a 'must-seek permission' that is done through the FAA website," Smith continued.

The FAA has developed a smartphone app called B4UFLY to help UAS operators determine whether there are restrictions or requirements in effect at the location where they want to fly. It is available for free download; details are at faa.gov/uas/where_to_fly/b4ufly/.

Regulations will continue to evolve. The airport and air base will continue reaching out to the public. Hainsey expects to hold seminars every six months or so.

The biggest challenge, Smith said, is making sure "people understand you can fly these things and have a blast with them, but you've got to do it according to guidelines and rules the FAA has put out to protect your drones and also the pilots that are sharing the airspace with them."

The young drone industry seems set to soar. Drones that sold for thousands of dollars just a few years ago are now available for hundreds instead, Hainsey noted. As they become increasingly affordable, available and capable, users are expected to flock to them.

"We're very excited about what they can do," the airport director said, "we just want to get the word out about safety. ... We weren't even talking about drones like this five years ago. Who's to say in five years where the technology will be?"