Life in tune: A new kidney, a new year in harmony for a local pastor 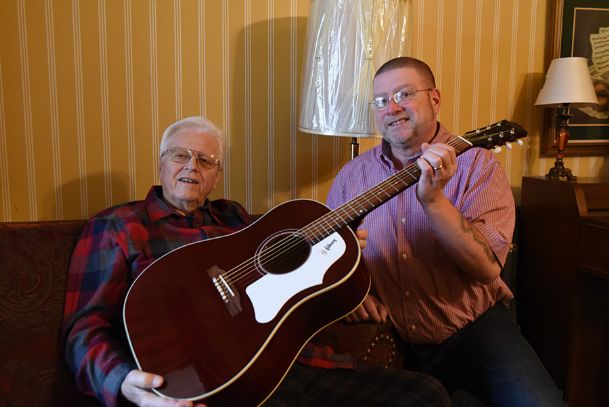 Ministers Jerry Potter Sr. of Columbus, left, and his son Tim Potter of Valdosta, Georgia, hold a new Gibson J-45 acoustic guitar gifted to Tim in December. The instrument signifies more than a lifelong love of music the Potter family shares. It represents bonds grown even stronger during the elder Potter's kidney transplant surgery in November. Tim temporarily stood in for his father in the pulpit at Covenant Life Ministries in Columbus Photo by: Deanna Robinson/Dispatch Staff

Pastor Jerry Potter's eyes take on a grateful gleam as he talks about events of the past six weeks. They have been life-changing. He sits on a living room sofa at his east Lowndes County home, not moving about much in the aftermath of recent surgery. He's supposed to take it easy for a while, but the minister's new year is off to a very good start, make no mistake. It's thanks to a new kidney and, yes, a new guitar. Not his own, but one gifted to his son Tim.

One day in November, Brother Jerry was feeling his chances of ever receiving a kidney transplant were rapidly dwindling. With no viable family matches available, he'd been waiting a long time. He remembers bowing his head a bit and saying to Anna, his wife of 55 years, "If I don't get a kidney right away, I never will because I'm 75, and that's just about the cutoff point." Anna said she would take some time to pray about it.

"And later my wife walked into the house and she looked at me and said, you're fixing to get a kidney," says the pastor, with a smile. When the phone rang unexpectedly at 1:30 a.m. a few days later, Anna's pronouncement was proven true. A kidney was available. The Potters were simultaneously anxious and hopeful as they struck out in quick order for the University of Mississippi Medical Center in Jackson.

The couple's five grown children had long watched their active father laid low by hours-long, in-home dialysis treatments administered by Anna four days every week; they were equally emotional about the impending transplant.

"We knew it was a miracle. There was no question in our hearts and minds," says Jerry's daughter, Denise Lee of Columbus.

Two days before Thanksgiving, the minister successfully received the kidney he, his family and the congregation of his church, Covenant Life Ministries, had been praying for.

Because Jerry would be absent from the pulpit post surgery, son Tim rearranged his own schedule in order to temporarily stand in for his father. Tim pastors a church called The Broken in Valdosta, Georgia.

It helps at this juncture to convey a little of what music means to both Jerry and Tim -- in fact, to the entire Potter family. Jerry is an accomplished guitarist and singer. Anna and all five children sing; some have made music their life's work. Most play instruments as well.

It all goes back to when the children were small.

"We lived in a little two-bedroom trailer in north Alabama when I was an evangelist," Jerry begins, "just a little trailer, with three kids then." There wasn't much of a TV, so for entertainment, Jerry would get out his guitar. Anna would pick up her accordion.

"We'd sing for hours," Jerry reminisces. "We'd sing good Christian songs and silly songs. We'd make popcorn and entertain ourselves, and our kids grew up, every one of them, loving music."

Tim confirms, "My earliest memory of him is him playing that guitar and us singing together."

As years passed, Jerry's ministry grew. He preached and sang in small churches from Florida to Michigan -- and in tents that sat 1,500 to 3,000 people, at home and abroad. He developed a following, particularly in Sweden. Through it all, music was an integral part of his message.

It so happened that while bringing a revival to Columbus in 1965, Jerry acquired from L.C. Clark what would become his most beloved guitar -- an electric 1963 Gibson SG.

"I have never in all my life regretted buying that guitar. ... I have owned Lord knows how many guitars in my life, and I've had some of the most famous guitars. I got rid of all of them, except one -- that was my Gibson."

Tim is a guitarist, too, regularly using an acoustic one in his church work in Georgia. So when a recuperating Jerry sought for a way to express his appreciation to Tim for filling in, an idea emerged.

"It just dawned on me," says Jerry. "Tim loves to play the guitar, and he needed a better one. I wanted to bless him, give a little back to his ministry."

The carefully-chosen gift from Jerry and others in the Columbus congregation was a new Gibson J-45. First introduced in 1942, the model has a history interwoven with many Grand Ole Opry performers Jerry has enjoyed, including Hank Williams Sr.

"I have all my life cherished, absolutely cherished, my Gibson guitar, and the J-45 is a beautiful guitar, one of the most famous on the market," the elder pastor explains. "When I started thinking about getting Tim something that he'd cherish the rest of his life, I couldn't think of anything better."

Via a connection forged through singer, songwriter and sound production engineer Allen Delk, who handles sound at Jerry's church, the instrument was acquired. When it arrived, Tim discovered a small element on the body was dislodged during shipment; the guitar needed to be returned for minor repair. When the company offered a different J-45 in exchange, Tim firmly declined: It needed to be that exact guitar. He'd found in its documentation that its production date was Aug. 24 -- his father's 75th birthday. It was an extraordinary, meaningful coincidence, Tim felt, and another emotional connection.

With the repaired instrument in hand, Tim is already using it in his outreach, as he and his wife lead singing at their Georgia church and in the community.

"It makes me better than I really am," he says modestly. "I fell in love with that guitar the minute I picked it up, especially because it coincides with (my father) getting the kidney. I'll always look at it as a reminder of the great things that have happened for him."

Jerry has just experienced what he calls the best Christmas he's ever had. His heart is full, thanks to recent gifts received and given, and he is eager to resume Sunday morning sermons -- even if they are delivered from a chair for a while. There is more music to be made.

"I told them," he smiles, "when I get that kidney there's gonna be no slowing me down."