High notes: Dr. B and Columbus High are singing a new tune, expanding a choral culture 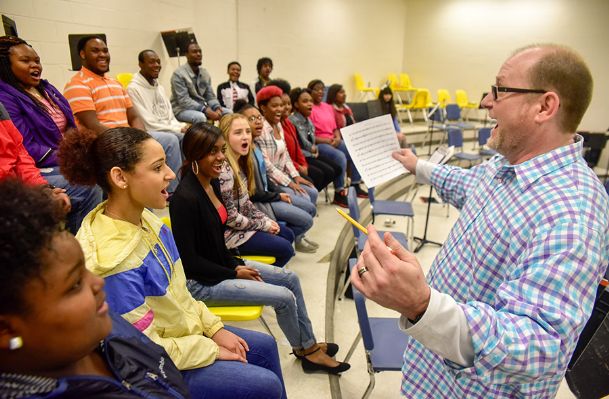 Columbus High School Director of Choirs Doug Browning puts members of the school choir through warm-ups Wednesday. Browning came on board as director in August, expanding the program's scope to include more vocal training and classical music. After a long hiatus, school choirs participated in the district choral festival a week ago and came home with all Superior ratings. Photo by: Luisa Porter/Dispatch Staff

"Chin up. Ears in line with your shoulders," Doug Browning says, corralling the attention of teenagers getting settled in bright yellow and blue plastic chairs Wednesday in Columbus High School's choir room. Fluorescent light bathes the scene. Fidgets and small talk fade away as eyes turn toward him and await the lift of his hand. In a time when some say positive news about teens is hard to come by, Dr. B -- as his students call him -- begs to differ.

"The talent level at the school is just off the scales, and this is an opportunity to do something special," Browning says. "Our community needs to be involved in the public schools, making sure that anything that is good gets sunlight shining on it and helping it grow."

Since Browning became director of choirs seven months ago, Columbus High is singing a new tune. Literally. New songs, new focus and new energy have infused the choral programs, and minds are being blown. So says choir member Maya Bogan, 17. She enjoyed watching faces in the audience a week ago when the students performed at the district choral festival in Ackerman. The school had little history of festival participation. Expectations, Bogan feels, were less than high.

"We surprised people," she says, big smile in place. "I liked seeing their expressions -- really, minds were blown."

All the singers can claim the accomplishment. Not only did they put their school back in the festival arena, they announced their presence -- coming home with Superior ratings in both Choir and Ensemble categories and qualifying for the state contest.

In an email Wednesday to Columbus High administration, Starkville High School Choral Director Regina Weeks, a former president of the Mississippi Music Educators Association, wrote that she could not, in her 16 years at Starkville High, remember any representation from Columbus High at the festival.

"I cannot tell you how thrilled I was to see that Dr. Browning is revitalizing the choral program ... I must say, they made a showing this year! Music is alive and well at Columbus High School ... "

After being between choir directors for some time, CHS is undergoing a shift in choral culture. Students who were once singing mostly show choir or gospel numbers are now also performing difficult 16th-century works like "If Ye Love Me" by Thomas Tallis and arrangements of Shakespearian texts. They are being exposed to music theory, vocal production, sight-reading and rhythm interpretation.

"We're being challenged," admits Bogan, who used to be in show choir. "I was really shocked by the introduction of the music Dr. B put in front of us."

It was a "whole lotta change," agrees senior Richard "RJ" Gore. "We weren't used to doing this type of music. Dr. B teaches us different genres and styles. He teaches us to use our voices to the fullest; he's training us."

Those in school administration have noticed. The choir was invited to sing at a school technology convention Thursday at Trotter Convention Center. They are currently performing at black history programs in area schools. They are being seen and heard.

"I'm very proud of their accomplishments," says CHS Principal Lori Gargile. "I look forward to future festivals because I feel like they're in a position that they're just going to get better and better. They've built confidence."

She applauds Browning for exposing students to more types of music, allowing them to develop an appreciation of music they may not otherwise have.

"He's truly an asset," Gargile says. "We have so much talent in the building; I'm just glad we have someone who is trying to showcase that."

Browning's busy schedule includes serving as music minister of Columbus' First United Methodist Church and as conductor of the Starkville-MSU Symphony Chorus. He annually conducts "Columbus Sings Messiah." But the high school environment calls for specific skills and methods, and "you've gotta bring those tools to work every day," the director says.

He tries to instill discipline and challenges students to sing critically, to ask themselves what they can do to bring each song, each piece of art, more power.

"In the choir world, we're full of miniatures; each song is a little encapsulation, small pieces of art that we construct." To illustrate his point, he likens songs to Faberge eggs -- tiny, but beautiful and sought after.

The kids seem to be getting it. And it doesn't hurt that Browning makes them laugh. He's incredibly funny, says 18-year-old senior Savion Lucious. He makes it fun. Creating a moment to laugh, says Browning, can be a bond, a connection in the midst of hard, concentrated work.

Bogan says Dr. B uses every opportunity to reach students, even those others may have given up on.

Lucious feels he and his fellow singers are making history for Columbus High's music program.

"We're making a foundation for others for years to come," the senior says. "I'm really gratefully proud to be part of this."

Browning admits he has big dreams for the future, dreams of the choirs representing the school, community and even the state in a positive light.

"I love, love passionately what I do ... and the students are learning what it means to be special."