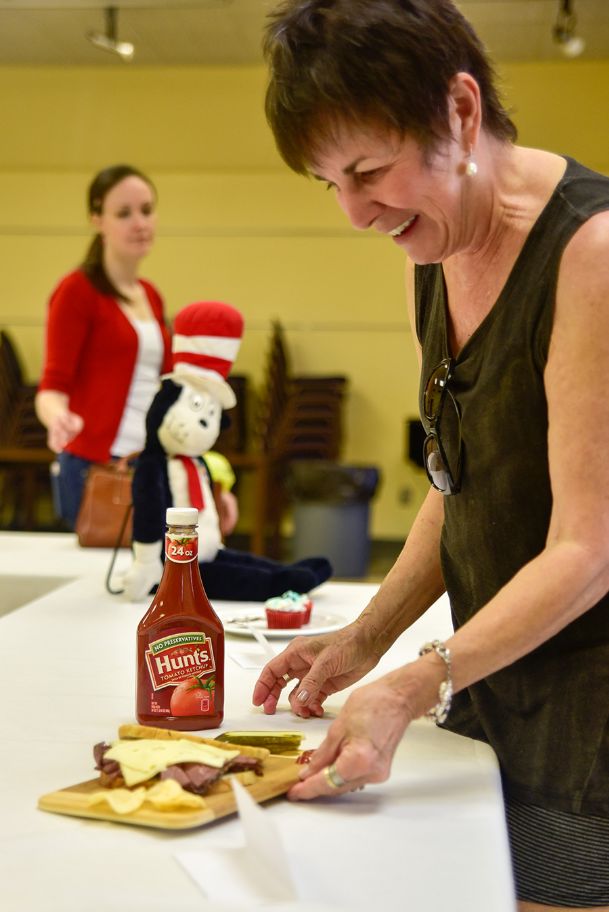 Melody Vydas puts the finishing touches on her "Catcher in the Rye" entry in the Columbus-Lowndes Public Library's inaugural Edible Book Festival April 13. Library archivist Mona Vance-Ali is in the background. Photo by: Luisa Porter/Dispatch Staff

Amanda Meadows hoped to spark interest in "One Flew Over the Cuckoo's Nest" with her entry. "There are so many facets to that book," she said.
Photo by: Courtesy photo

"Catcher in the Rye" - "ketchup in the rye," by Melody Vydas.
Photo by: Courtesy photo

Celebrated author and scholar C.S. Lewis once said, "Eating and reading are two pleasures that combine admirably." Lewis surely didn't have such things as "edible books" in mind, but the sentiment, nevertheless, suits. As part of its National Library Week observance, the Columbus-Lowndes Public Library hosted its first ever Edible Book Festival April 13. The community was invited to interpret literary titles, characters or themes with food. Entries could range from title puns to literal recreations of a book cover. The medium? Cake, veggies, fruits, meat, peeps, it didn't matter -- as long as it was edible.

So it was that visitors to the library last Thursday got to view 12 festival entries, foodie versions of books like "One Flew Over the Cuckoo's Nest" and "A Million Little Pieces." There were butterbeer cupcakes, a la "Harry Potter," and clever candy bar displays for books like "Lonesome Dove." One participant, Courtney S. Jones, even interpreted her own book, "Predestined," garnering an award for "Most Insightful."

Friends of the Library member Melody Vydas chose "Catcher in the Rye" by J.D. Salinger as inspiration for her entry, a sandwich on rye bread.

"The book's character lives in New York, and pastrami and Swiss on rye is sort of a New York food," explained Vydas. "I don't believe that in New York they eat ketchup on it ... that may be kind of sacrilegious," she laughed, but a few dollops of the saucy condiment on this particular sandwich gave Vydas' entry its punch line -- "ketchup in the rye."

Rachel Pitman's cake interpretation of J.R.R. Tolkien's "The Hobbit" took the festival's "Best in Show" award. It came complete with Frodo Baggins sitting outside his grass-covered home next to a well-tended garden of fondant lettuce, cauliflower, peas and tomatoes. Pittman, a 2009 graduate of Mississippi University for Women's Culinary Arts Institute, bakes through her home business, The Sweeter Side.

"I don't often get to pick my own cake design and do it however I want to do it; I like to do fun things and thought this idea was cute," said the Little Rock, Arkansas native, who has always wanted to be pastry chef.

Vance-Ali had an entry inspired by a find at the grocery store.

"I had a lot of fun thinking of possible ideas," she said. "When I came across blue icing that came with tiny fish sprinkles, I knew instantly that it was perfect!" Vance-Ali covered a cake with the ocean-blue icing and showered the top with the fish-shaped confetti. "Then, I simply placed one large gummy fish on top with a toothpick, and it worked perfectly with the book title 'The Big Fish' by Daniel Wallace."

Amanda Meadows hoped to pique interest in Ken Kesey's "One Flew Over the Cuckoo's Nest" with her "nest" made by hollowing the center of a cake layer and icing what was left with chocolate icing mixed with coconut. An accompanying tray of cupcakes was topped with Smarties and other candies to resemble medication. Her entry took the "Most Creative" award.

"I'm hoping they'll do (the festival) every year," said Meadows. "It's fun to see what people came up with, exciting when you see people passionate about a book or excited about reading. It's powerful."

The inaugural festival was deemed a success. And to answer the inevitable question, yes, the entries were available for tasting at the end of the day. Library staff are already looking forward to doing it all again next spring.

"The festival is a great avenue for people to show off both their playful and creative sides," said Vance-Ali. "We plan on hosting this event next year during National Library Week, so get your thinking caps on now!"