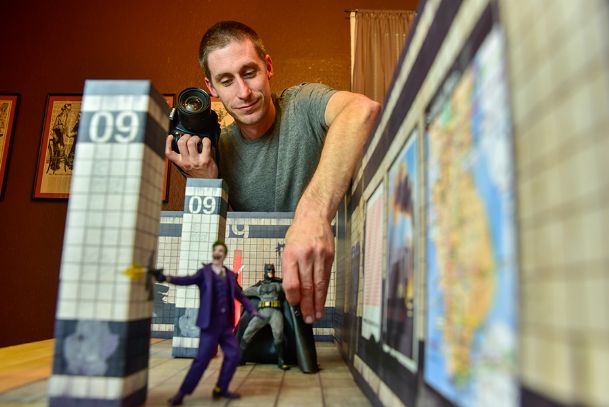 Erik Studdard sets up a photograph Tuesday, positioning a 25th anniversary Michael Keaton Batman and The Joker against the backdrop of an abandoned Gotham City subway terminal. The one-twelfth scale figures come with different head sculpts and hand sculpts that allow toy photographers like Studdard to tell stories through different scenes. Studdard, who lives near downtown Columbus, is a graphic designer at Nicholas Air. Photo by: Luisa Porter/Dispatch Staff

A toy photographer's goal is usually to set up and shoot scenes as though the figures are human. Lighting is critical. In this Batman photo, Erik Studdard used blue and red glow sticks to add atmosphere to the shot.
Photo by: Photo by Erik Studdard

This scene with The Joker is lit with blue and red glow sticks. Studdard also uses saved phone screens or a photographic device known as a soft box to illuminate his shots.
Photo by: Photo by Erik Studdard

The "Star Wars" bounty hunter on Erik Studdard's desk was used in the shot displayed on the computer screen. Studdard took it at sunrise July 30 on Hilton Head Island in South Carolina.
Photo by: Luisa Porter/Dispatch Staff

Erik Studdard scrabbled around in the drawer of a plastic storage bin. It's a repository for superheroes, warriors and villains, even a fierce black steed, nostrils flared. Studdard finds the piece he's hunting for -- "Daryl Dixon," the crossbow-carrying zombie hunter from the "Walking Dead" TV series. It's one of dozens of action figures the Columbus native has at home to help act out storylines. Studdard is into toy photography, and in that realm, little toys can tell epic tales.

While some form of toy photography has been around for decades, social media has fueled a growing global community of enthusiasts who revel in the challenge of making toys appear lifelike through the lens. It's a hobby Studdard took up less than two years ago. A good friend, Chris McDill, helped light the fire. McDill was big into building "Star Wars" Legos.

"I didn't realize toy photography existed until Chris sent me some links to photographers who were taking pictures of 'Star Wars' Legos," Studdard said. "It blew me away how beautifully lit and how intricate some of the scenes were." After a time, Studdard -- already a Batman buff with some figures on hand -- began experimenting with his own camera. He posted the results on Instagram and discovered a large, sharing online community where 39-year-old graphic designers are encouraged to play with toys again.

Toy photography is a mix of imagination, creative savvy and technical skill. In Studdard's photos, the goal is to make his action figures as "human" as possible, approaching the scene as a cinematographer would, employing positioning, lighting and surrounding to convey a story.

At the dining table -- which Studdard has turned into a gritty Gotham City subway terminal -- he leans over the walls of his diorama, positioning one-twelfth scale Batman and The Joker for a showdown. His affinity for the caped crusader goes back a long way.

"I still remember showing up to the theater in 1989 and standing in line for nearly an hour to get a seat to watch Michael Keaton become The Batman," said Studdard. "That's where it all started for me."

Since taking up toy photography, Studdard has pushed himself to improve his craft. He's upgraded to a Nikon D800 and 24-85 millimeter lens with a macro setting. He's honed in on Mezco Toyz and Hot Toys as preferred manufacturers of figures, appreciating their great attention to detail. Most of his toys are one-twelfth or one-sixth scale. Many of Studdard's smaller figures range in price from $80 to $110, but like most hobbies, this one can get expensive. A sixth-scale Tactical Batsuit Version of Batman, for example, goes for $266. A 10th anniversary quarter-scale Heath Ledger as The Joker, due out in 2018, can be preordered for $540.

At his dining table-cum-subway, Studdard shakes a can of Atmosphere Aerosol and sprays, sending a fog swirling around Batman and Joker. It's one of many ways photographers develop shots in this subgenre where wheat flour can be snow and a parched desert floor might be crushed cornflakes.

Lighting is everything. "It makes or breaks the picture," said Studdard, adjusting a soft box, a photographic lighting device looming over his scene. "I try to do mine mostly at night because I try not to get all that natural light coming in." The hobbyist also controls light with assists from colored glow sticks and saved screens on his phone. His goal is to get as much of the scene realistic with his set-up and camera, keeping computer post-editing to a minimum.

It's not only DC Comic's Batman he spends hours with, composing and getting the shots he wants. Studdard has experimented with characters from "Star Wars," "Predator," "The Punisher," "Walking Dead" and others.

Is there such a thing as a toy bucket list? Yes, and there are several on Studdard's list, especially with the new "Justice League" and "Thor" movies coming out and the related figures that will hit the toy markets.

In March, Studdard was honored to have a selection of his photographs featured in Exclu Design Collective's "Batman Week" online. It helped expand his connection to even more toy photographers.

"The toy community is a really helpful community, and people are always willing to share their own 'behind the scenes' and say how they made a picture happen," said Studdard. There is no set recipe for how to do it right. Toy photographers are constantly experimenting, sharing and inspiring each other online. To date, Studdard hasn't come across anyone else in the Golden Triangle area who does it, but would like to if they're out there.

For a boy enthralled by a mysterious, masked crime fighter in black on the big screen all those years ago, getting to conjure scenes from the films and comic books almost 30 years later is a blast.

"You get to recreate things you saw and try to put your own spin on them," Studdard said.

He doesn't forget that his friend Chris McDill pointed him toward this creative outlet through the links he shared. McDill passed away last year. A framed photograph of him sits on a table in the entryway, not far from the diorama.

"Chris was always doing artistic stuff and always trying to push everybody to do something they enjoyed," said Studdard. "In his way he was showing me, hey man, people are doing cool stuff with toys."

Editor's note: More of Erik Studdard's toy photography can be seen on Instagram at @erikstuddard.