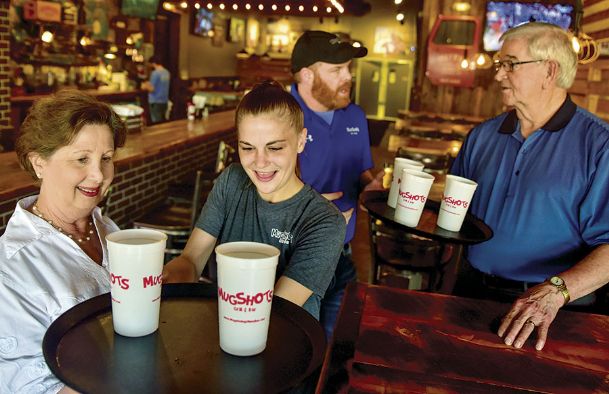 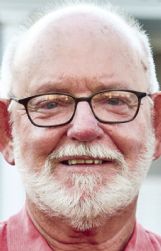 Eulalie Davis and Bobby Harper got an introduction in serving food and drinks Wednesday in preparation for their upcoming shifts as celebrity waiters. They are among 21 volunteer servers who will raise funds for Camp Rising Sun Tuesday, May 22 at Mugshots in Columbus. All tips and donations the volunteers receive from 5:30-9 p.m. will directly benefit the camp for children ages 6 to 17 who have been or are currently being treated for cancer.

"This is the first time we've had a Celebrity Waiter Night," said Camp Rising Sun board member Fred Kinder. He's been volunteering for most of the camp's 31-year history. "It's just something you can't let go," he said.

Kinder and board member Jane Ford are overseeing Tuesday's event, which was inspired by a clip Kinder saw on TV of another organization's wait night.

Camp Rising Sun was founded in 1987 by Junior Auxiliary of Columbus, of which Ford was a member. It is now overseen by a volunteer board committed to giving children who have received a cancer diagnosis a traditional camp experience, all while recognizing and meeting their health needs. It is offered at no charge on the Camp Pratt property in Lowndes County.

To date, about 1,800 campers have arrived for summer respites filled with swimming, arts and crafts, canoeing, fishing, zip-lining, archery and much more. Medical staff on site 24 hours a day closely monitor each participant.

Davis is glad to offer her time. She has long been impressed with the dedication shown by volunteers who came together to ensure Camp Rising Sun's future years ago.

"I admire them; they persisted," she said.

Harper volunteered as an overnight counselor for several years early in the camp's history. He has seen firsthand the joy campers experience and the "tremendous commitment of the volunteers behind it."

Tuesday's Celebrity Waiter Night is a first for the Columbus Mugshots as well as for the camp.

"We're new to this, but we're excited to be able to put on a benefit for Camp Rising Sun," said Mugshots owner Jim Hicks. "It's a good program for the kids and will hopefully be a great fundraiser."

Mugshots is located at 1737 Highway 45 North, in the Windchase shopping center.