In the garden with Felder: Thought of cold weather signals it's salad time 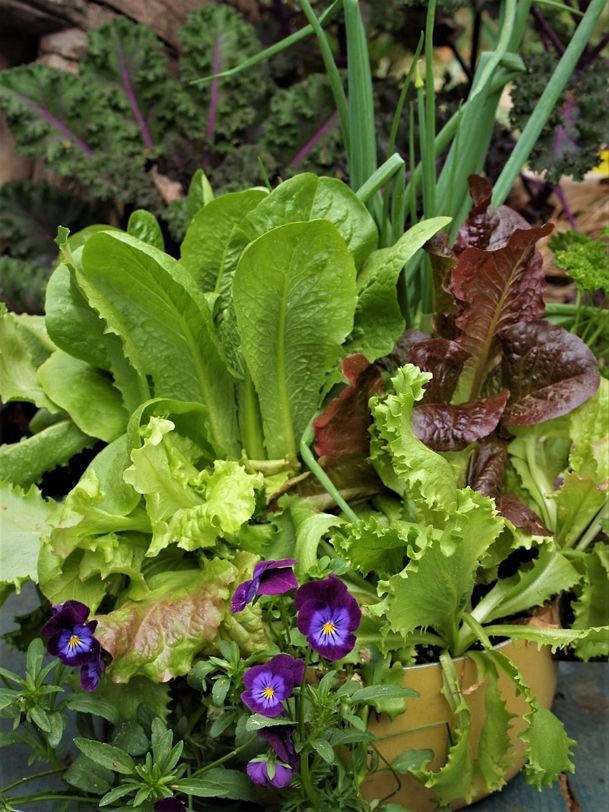 It's time for Southern gardeners to get started with planting cool-weather veggies and salads ready-to-eat. Photo by: Felder Rushing/Courtesy photo

Too bad my tummy doesn't have eyes to better appreciate the colorful goodies I'm about to send its way right out of my little container garden.

Unlike our northern friends who are already hunkering down for winter, this time of year savvy Deep South gardeners start growing cool-weather veggies, several of which are beautiful, nutritious and frost- or even freeze-proof.

And truth is, not much that's good to eat is easier or faster than colorful lettuces and other healthful salad greens. They grow so fast from seed they can be harvested before anything can happen to them because there are fewer bugs in the winter, and less watering and weeding needed. And no need to worry whether whoever picked it washed their hands, if you do it yourself.

In addition to growing lettuces from seed I always set out few small transplants of broccoli and cabbage, colorful Swiss chard, brilliant green parsley. and a few super cold-hard kales -- especially the blue-green one named lacinata, often called dinosaur or "Tuscan Blue" kale. It is one of the tastiest, nutrient-dense vegetables and can tolerate down to nearly zero degrees.

These biggish plants are mixed together by botanic garden horticulturists in winter flower beds and big pots, often lording it over smaller pansies, snapdragons and other cold weather flowers. Coolest thing is, when you're tired of looking at them you eat 'em; just break off the lower leaves and recipe them up.

I've planted lettuces, kale, parsley, pansies and multiplying onions in an old cook pot with holes drilled in the bottom. Lettuce actually gets sweeter after mild frosts, but won't take the hard freezes like kale and Swiss chard. When temps dip into the lower 20s I just drag the pot indoors 'til it warms up a bit.

So, other than protection from hard freezes, main things potted greens need are sunlight, watering in sunny, windy weather and an occasional shot of fertilizer. I usually use a small amount of slow-release fertilizer beads or a half strength shot of liquid fertilizer, because, good intentions aside, organic fertilizers don't work as well in cold soils as they do in warm summertime dirt.

Back to lettuces, the easiest of all. I can get an edible crop in just three weeks from seed, and cut it two or three times before it peters out. Rather than plant a lot at one time I spread my planting out in succession crops, starting a new crop every couple of weeks for nonstop homegrown goodness.

The trick is to get a small wide pot or two, not too deep because these veggies have really shallow roots, fill it with decent potting soil, and sow a mere pinch of seeds over the surface.

Within a few days the little plants will sprout, and after just a couple of weeks you can thin out and eat the cluttered stuff, and what's left will fill out quickly to be cut once or twice. By starting a new pot or two every couple of weeks, you can have a constant supply of healthy, vitamin-rich eating.

For a pretty mesclun blend, throw together seeds of three or sometimes four different lettuce varieties, including both light and dark green frilly and flat leaves, and something red. A tiny pinch of this mix sprinkled every few inches will sprout into ready-to-cut salads.

Homegrown salads are easy and pretty both in the garden and on the table, even for kids and folks who only have a tiny slice of winter sunshine on a patio or porch.

Won't happen without getting started. And it's time.