In the garden with Felder: Pollarding, poodling, pruning: a matter of personal taste 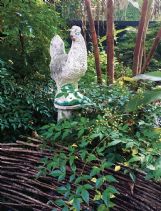 Some gardeners are standard-setting bullies, criticizing neighbors for doing what's been perfectly acceptable for centuries.

Stick with me a minute; I'm not trying to change any minds, just sharing some important insight before anyone gets their knickers in a knot.

To set this up, this past summer a neighbor came onto my property and cut a quarter-century old multiple-trunk yaupon holly tree into 6-foot stumps. Yeah, I'm dealing with it legally, but that's not the point.

Rather than remove the boogered-up but otherwise healthy plant, I simply sheared the wads of new branches into tight green balls, like some folks do without neighborly recrimination to junipers. Poodling plants, like mowing lawn stripes, are art forms, right?

So far so good, but let me back up. Years ago my old friend Steve Bender, recently retired senior garden writer for Southern Living magazine, turned a joke made by fellow editor Linda Askey into an almost unstoppable self-spreading meme, and I have been having a tough time pushing back on it.

The term they coined is "crape murder" and refers to the straight-across whacking of naturally statuesque trees. Lots of folks believe it butchers the graceful Southern garden mainstay's architectural form, and yeah, it does. This "topping" is called dehorning by tree surgeons, and usually leads to decay and a witch's broom of thin stems that break easily later. Not good for most trees.

However -- and keep in mind that I helped teach the tree surgery course at MSU -- it doesn't apply to those folks who cut new growth every year back to balls on the ends of stems, an ancient but still-relevant practice called pollarding. It's not the same as dehorning.

Physiologically it doesn't harm certain trees done this way every year any more than, say, shearing a holly, boxwood or Ligustrum into a hedge, box, cone or meatball shape. Pollarding is actually a traditional Japanese form of niwaki called "floating clouds," and while studying plants in Shinto temples in Japan I photographed crape myrtles that've been done this way for centuries. You can find photos at FelderRushing.blog.

And those quaint homemade "wattle" fences in England, which I make in my own Mississippi garden? Their uniform-sized posts are made from homegrown trunks of trees cut back to the ground every three or four years (called coppicing), and the woven bits are the long thin stems that sprout every year from the balls of pollarded trees.

Now, to those who unflinchingly insist it's just ignorant, keep in mind that groundskeepers at the American Horticulture Society headquarters lovingly tend a tree done this way ... for over a century. And they, ahem, are neither ignorant nor tasteless.

"Perverted," you say? I had a lady loudly insist it's unnatural, and she's right. But I could barely resist noting that she had plucked out her natural eyebrows and painted them onto a different part of her forehead. Touche!

It's not my place to condemn an individual's choice of following grooming or gardening practices that really don't matter much in any big pictures. Especially this one, that is followed in nearly every botanic garden on earth and even in churchyards across the South.

Pollarding isn't crape murder, it's a style that either you like or you don't. Sure, some self-appointed Southern Living and zealous Master Gardener tastemakers disapprove. But doesn't it mostly boil down to a matter of personal taste?

Besides, I don't care what my neighbor thinks of my newly poodle holly.