Trivial Pursuit pays off on 'Jeopardy' for MUW professor 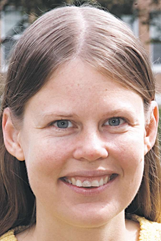 When Alex Trebek revealed "College Towns" as a category this week on "Jeopardy," contestant Nora Corrigan of Columbus was pretty pleased. That, and other topics, helped the Mississippi University for Women assistant professor of English finish in first place on Tuesday, with more than $27,000 in winnings.

"Religion," however, wasn''t quite as kind to her in the Final Jeopardy round of a close game which aired today at 11 a.m. locally on WTVA-TV. The 34-year-old trivia fan finished third, bringing her total winnings to right at $28,200. Not bad for a day''s work.

"One thing I hadn''t realized is that they tape five or six shows on the same day," Corrigan said of the taping in Los Angeles in March. "You go early in the morning, in a pool of about 18-20 contestants. They draw names; it''s completely random which game you''re going to play, and you don''t know until right before it happens."

The Reston, Va. native credits part of her success to "epic" all-night games of Trivial Pursuit with fellow graduate students in college.

"I''ve really missed that since I moved here, so I decided to take the online ''Jeopardy'' test just for fun," she said. She advanced to an in-person audition and practice interviews in Washington, D.C., in May 2009. Then, she says, "I pretty much completely forgot about it."

So when the call came in February 2010 to come on the show, she was caught by surprise.

"I was in complete shock; it came out of the blue," she said.

Of finally making it on stage with host Trebek, Corrigan said, "Oh gosh, I think I was literally physically shaking. I remember thinking, ''Please don''t let me be first.'' When it was over, I couldn''t believe I''d won."

Ironically, since moving to Columbus two years ago, the professor had found living without a television fairly easy to do. That is, until recently.

"I only bought a TV last Friday, so I could watch myself on ''Jeopardy,''" she laughed.

Corrigan holds multiple degrees in English from The College of William and Mary and University of North Carolina at Chapel Hill. She spent a year as a visiting professor at McKendree University in Illinois before starting at MUW in August 2008. She currently teaches Shakespeare, English Literature I and II, and Composition.

For information on how to become a contestant on "Jeopardy," visit www.jeopardy.com.