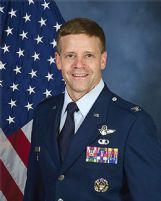 The Town & Tower Club quarterly meeting will include the Columbus Air Force Base.

The Wing conducts specialized undergraduate pilot training for U.S. Air Force and allied officers, as well as tactical training for Afghan and Lebanese pilots and aircraft maintainers in the A-29 Super Tucano at Moody AFB, Georgia. The wing at Columbus is composed of 234 aircraft that fly an excess of 54,000 sorties and over 75,000 hours per year to train over 400 pilots and combat system operators annually. The vice commander is responsible for day-to-day operations of base support functions and mission activities for the Wing's nearly 3,000 military, civilian and contract airmen. He also manages an operations and maintenance budget of $106 million and capital assets and equipment exceeding $1.3 billion.

Col. Denham was raised in South Kent, Connecticut, and is a 1995 graduate of the United States Air Force Academy. He attended Euro-NATO Joint Jet Pilot Training at Sheppard AFB, Texas, and was selected to fly the F-15C.

Prior to this assignment, he was the chief of combat plans, 609th Air Operations Center at Al Udeid Air Base, Qatar, and a 2016 graduate of the Air War College at Maxwell AFB, Alabama.

He is a command pilot with more than 2,700 flying hours and nearly 200 combat hours.

Lunch is $15 per person, payable at the door, in the Gail Gunter Multipurpose Room, Fant Memorial Library, MUW campus. Please RSVP by noon Monday, April 1 a muw.edu/towntower or to 662-329-7119.