Pilgrimage visitors reconnect with family past in Columbus 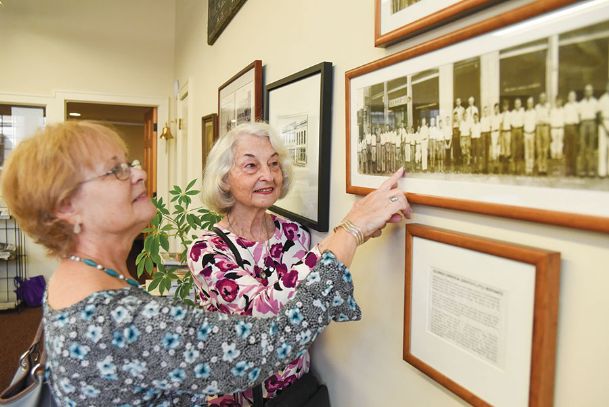 Pilgrimage visitors Dianna Buder Suratt, right, and her niece, Brenda Burns, both of Canton, Georgia, make a happy discovery when they find Suratt's father, Billups Norton Kennebrew Buder, in a vintage photograph hanging in The Commercial Dispatch March 29. "It made our day," said Burns. Photo by: Deanna Robinson/Special to The Dispatch

Dianna Buder Suratt has never lived in Columbus, but her visit to the city during the 79th annual Spring Pilgrimage felt like coming home. It was also "the best birthday present I could have had," said the Canton, Georgia, resident.

To celebrate Suratt's 77th birthday, her niece Brenda Burns, also of Canton, brought her aunt to the Pilgrimage to reconnect with a place important to their family history. Suratt's late father, Billups Norton Kennebrew Buder, was born in 1914 and raised in Columbus. More specifically, he grew up at Temple Heights, a mainstay on the Pilgrimage tour. Members of the Kennebrew family occupied Temple Heights for an almost 80-year span, from 1887 to 1965. For Suratt, who had not been in Columbus since 1964, her March 28-30 visit was filled with memories and emotion.

During activity-packed days, she and Burns, Billups Buder's granddaughter, enjoyed Pilgrimage activities and had a personal tour of Temple Heights. They searched out family plots at Friendship Cemetery. They were shown a wealth of historical information at the Columbus-Lowndes Public Library Local History Room and visited the site on Main Street of the former Buder Brothers Jewelry Store.

"We also went to First United Methodist Church where (Billups Buder's parents) Jessie and Edward Buder met," said Burns. "We have a certificate where my grandfather was in the 'cradle roll' there, and we also have a Sunday School certificate."

"We were walking down Main Street and just looking around and saw The Commercial Dispatch. We knew he had been a Little Merchant there," said Burns, referring to youth who delivered newspapers in the 1920s and 1930s. Suratt had her photo taken in front of the building.

What "made their day" was discovering a circa latter-1920s photograph of Little Merchants prominently displayed on the wall in the newspaper's front office. There, among 36 boys in front of the The Dispatch with then-Editor and Publisher Birney Imes Sr. and Circulation Manager Lewood Conner, was Suratt's father -- tall, in white shirt and tie, his dark hair tousled. Suratt and Burns were overwhelmed.

"We were so surprised and delighted to see the photo!" Suratt said.

Another highlight of the ladies' trip was an extended visit with Temple Heights owner Kathy Novotny and former owner Dixie Butler.

"When they came, they brought a treasure trove of family articles and pictures," said Novotny. "When they started unfolding all of these pictures, I felt like I needed to share with Dixie, and she came right over and we all had a trip down memory lane. I enjoyed them thoroughly."

The pilgrimage to Columbus was a meaningful, resounding success, said Suratt and Burns.

"I've told everybody it was more than we could have hoped for," Burns remarked. "Everybody was gracious and bent over backwards to help us. God put all the right people before us to help guide us with what we needed. It was wonderful."

Suratt said, "Everybody that we touched along the way was just as gracious as they could be, and there was as much hospitality as anybody could ever hope for. I couldn't have had a more wonderful birthday present."