'How can we help?': After the storm, it takes a team 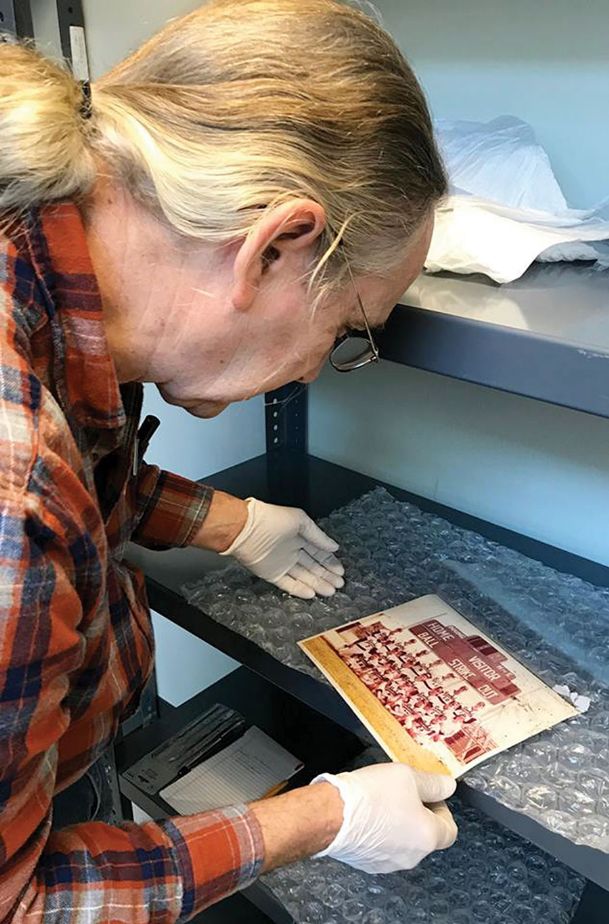 Billups-Garth Archives volunteer Gary Lancaster carefully removes a photograph from its glass frame to air dry in a climate-controlled room within the Beulah Culbertson Archives and Special Collections at The W. The photo is among about 100 items in R.E. Hunt Museum damaged when an EF-3 tornado hit Columbus Feb. 23. Photo by: Courtesy photo/Billups-Garth Archives 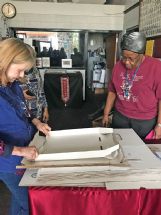 R.E. Hunt Museum board member Laverne Leach, right, looks on as Lucy Allen from the Mississippi Department of Archives and History in Jackson assembles an archival box at Hunt School to transport damaged museum items to a climate-controlled environment Feb. 26.
Photo by: Courtesy photo/Billups-Garth Archives 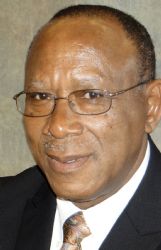 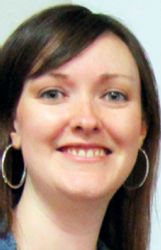 As the beam from his flashlight fell on the damage, Johnny Johnson's heart sank as he walked through drizzle, debris and darkness toward Hunt School. Just hours earlier, an EF-3 tornado had hit Columbus, leaving its destructive mark on neighborhoods and structures including the school on 20th Street North -- and the R.E. Hunt Museum and Cultural Center housed inside.

The Feb. 23 tornado spawned a thousand stories; this is just one, about a team that came together in the wake of the storm to protect part of the community's African-American history. The effort would involve Hunt Museum volunteers and archivists from the Billups-Garth Archives at the Columbus-Lowndes Public Library, the Department of Archives and History in Jackson and Mississippi University for Women.

When the tornado struck, Johnson's first thoughts were for human safety. Then concern turned to the museum collection representing decades of Columbus' African-American history. Johnson is president of the museum board. He also served as assistant principal and principal at Hunt from the late 1970s to early 1990s.

Opened in 1953, Hunt served as the only high school for African-Americans in Columbus until it was consolidated in 1970 with Stephen D. Lee High School following racial integration. Hunt remained open in various forms, including an elementary school, middle school, intermediate school and most recently as a success academy.

Soon after the tornado hit, Johnson was alerted by city officials about damage at the school. He and several other board members and volunteers made their way there through darkened streets and downed limbs.

"When I saw it, my first impression was, 'I hope we can keep this thing alive,'" Johnson said. "It was about 9 or 9:30 (p.m.), we had our flashlights, and the amount of damage we saw ... part of the roof was blown off, doors were blown off, and we really didn't know what to expect inside."

They found extensive damage to museum contents that had been near windows. Part of the ceiling had also fallen in. For two to three hours that Saturday night, volunteers toiled in meager light under a leaking roof to move photographs, annuals and documents to a drier location in the school. They were anxious to save it all.

"The mission of the museum is preserving the African-American culture here from the early 1900s up until now, so that young folks in our area would be able to benefit from the history developed by our forefathers," Johnson said.

They would soon have help.

Archivist Mona Vance-Ali of the Columbus-Lowndes Public Library was also concerned about how the museum had weathered the storm.

"On Monday after the tornado, I contacted the representatives from the Hunt Museum and said, 'What do you need? How can we help?'"

She soon learned the main issues were items already waterlogged, and contents that would deteriorate with no electricity, broken windows, no air control and significant humidity. After consulting with Johnson, Vance-Ali rallied the cavalry -- in the form of help from the Mississippi Department of Archives and History as well as The W.

Lucy Allen is Museum Division director of the Department of Archives and History.

"I came to Columbus with Nan Prince, who is director of collections, and Laura Heller, who is collections coordinator for the Archives and Records Services Division, because we were familiar with disaster recovery, especially regarding artifacts and historic papers."

Allen was director of the Old Capitol Museum in Jackson when it was hit by Hurricane Katrina in 2005. She and other department experts greatly assisted museums on the coast after the category 5 hurricane.

"(In Columbus) we felt it was important for us to do what we could to help with figuring out what the next steps are," Allen said.

Vance-Ali also enlisted the help of Derek Webb, MUW Special Collections librarian and university archivist. Together, they all met with Hunt Museum volunteers at the school to assess each item's condition, box up the most severely damaged -- many of them wet framed photographs -- and transport them to the Beulah Culbertson Archives and Special Collections at The W's Fant Library.

"Rain was expected the next day, so it was a matter of a race against the clock at that point," said Vance-Ali.

"We brought archival boxes to help," Allen said. "We wrote down everything that we put into a storage box to be removed to a better climate control; there were about 100 items."

Vance-Ali and others from the library archives worked with Webb to unpack items and rehabilitate them as much as possible, depending on the nature and extent of their damage.

Allen noted that, while some items would recover from the drying process better than others, most photos, documents and books appeared to be salvageable.

Webb said, "This is the first time we've been able to reach out to another institution and provide assistance. The Hunt Museum has been a valuable part of Columbus' cultural memory, so it was important to everyone that that institution and their holdings be preserved."

Museum board member John Ballard feels the same, though he never attended Hunt and is not a native of Columbus; he moved to the city in 1976. Yet, he worked alongside the others after the tornado, making a photographic record of the museum damage.

He understands the connection Hunt alumni feel toward the school. He graduated from Lanier High School -- "better known as 833" -- in Jackson.

"That's where my love for doing what I do comes from," he said. "We were one of the last segregated classes in Jackson." His experiences helped develop his sense of community, his appreciation of the importance of history, he said.

"You find community wherever you go, and you plug into that community. I found it here. ... That's the thing about Hunt. It's a continuing time line."

Following their rescue, all contents of the Hunt Museum are now back in the custody of the board, stored in a safe facility. The group plans to meet soon, but until the future of the heavily damaged Hunt School is known, the collection will remain in its boxes.

"It's wait and see for now," Johnson said. He's grateful to everyone who helped protect the memorabilia.