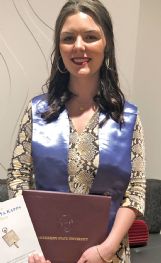 Ashley Megill Imes of Columbus was inducted into the Phi Beta Kappa Society April 2 as a new chapter was established at Mississippi State University. Imes is among 77 students in the top 10 percent of their graduating class selected for induction for outstanding academic achievement in the arts and sciences. The honor society was founded during the American Revolution by five students at the College of William and Mary. The new Gamma of Mississippi Chapter was installed during ceremonies at The Mill. There are 286 chapters at American college and universities and 50 active alumni associations. Former members include 17 U.S. presidents and more than 140 Nobel Laureates.