In your corner: Fighting back against Parkinson's disease 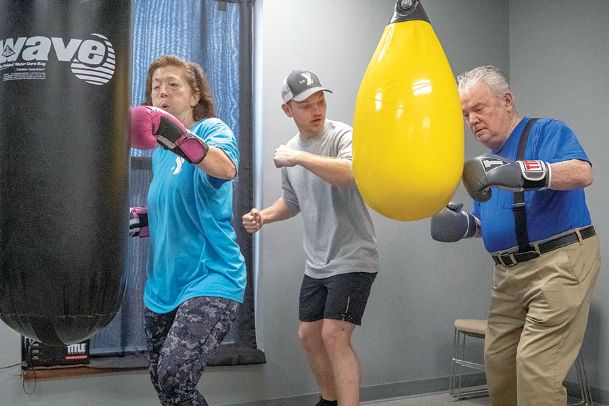 Mary Anna Nelson of Columbus works out at a stationary bag Thursday.
Photo by: Chris McDill/Special to The Dispatch 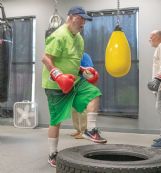 Al Broadbent of Millport, Alabama, exercises at a Rock Steady class station Thursday. He commutes to Columbus several times a week for adaptive fitness classes at the Y.
Photo by: Chris McDill/Special to The Dispatch

Salem Gibson, standing, leads the Rock Steady Boxing class in a strength and cognition exercise. Participants take turns holding a 10-pound weight above their heads while each person answers a question posed to the group.
Photo by: Chris McDill/Special to The Dispatch

It was in July of 2018 that Mary Anna Nelson noticed a tremor in her hand on the steering wheel as she drove. She feared it was an ominous sign; her brother had battled Parkinson's disease for the previous four years. By December, her suspicions were confirmed. Nelson had Parkinson's disease.

"I became a member of a club I never wanted to join," the Columbus woman said. "It's a pretty stinky disease."

Before long, though, the retired elementary educator learned of another "club," one might say -- this one at the Frank P. Phillips YMCA in downtown Columbus. Now, she says, she doesn't know what she'd do without it.

Thursday morning at the Y: Jerry Lee Lewis belts out "Great Balls of Fire" as Nelson delivers an upper cut to a 75-pound stationary bag suspended from a steel beam.

A few feet away, Gina Kim practices vigorous lunges on an industrial-sized tire. Al Broadbent gives what-for to a speed bag with his gloved fists. All around the Rock Steady Boxing class, men and women punch, step, lunge and lift to the quick-paced music of Chuck Berry, Elvis and Whitney Houston. The boxers are motivated; they are all in a battle against the same opponent -- Parkinson's. The neurological condition marked by tremor, muscular rigidity and slow, imprecise movements is progressive. Some class participants have borne their diagnosis longer than others. But wherever they are in the journey, they know the Rock Steady workout and the Y's other adaptive fitness programs help.

Salem Gibson is the YMCA's Adaptive Fitness coordinator. Adaptive fitness specialists develop physical fitness programs for people with specific needs. He traveled to Rock Steady Boxing headquarters in Indianapolis, Indiana, last spring for certification in the program for individuals with Parkinson's. (He also holds a bachelor's degree in

"We're not curing anything," Gibson made clear. "What we're doing is creating a lifestyle that delays the symptoms and, in the long run, creates empowerment to continue to choose what they want to do and have a body that can support it."

Kim was diagnosed with Parkinson's disease in 2011, in her very early 50s. She lived in Atlanta at the time and quickly got into an exercise program that included boxing. When she and her husband moved to Columbus about two years ago, it was important to Kim to be able to continue the regimen. The couple met with Y staff about instituting a boxing class locally.

"It's a research-based program, and it's been determined that two and a half hours of vigorous exercise per week can help slow the progression and help manage symptoms," she said, citing a Parkinson's Outcomes Project report.

Rock Steady participant Al Broadbent of Millport, Alabama, can attest to it. When he began commuting to Columbus several times a week for adaptive fitness classes, he had to use a cane. Now he's moving freely without a cane from station to station in the boxing room.

Broadbent and several other Rock Steady boxers also take advantage of the Y's Adaptive H2O, a class held in heated water to focus on large and fine motor skills, balance and hand-eye coordination; Pedal Power, which uses stationary floor pedals; and PWR!Moves, an exercise class designed to improve symptoms for those with Parkinson's and other limited mobility issues.

"We also have little seminars or health talks about certain topics, for family members as well as (class members)," explained Gibson. "And we've started a new Adaptive Walking Club that gets together on Fridays to walk outside, to kind of give us a little elevation change, get away from familiar surroundings, focus on how to step, not fall, recognize cracks ... "

The range of classes makes "a world of difference" said Broadbent, who was diagnosed in 2010. "If you ever stop, Parkinson's catches up with you," he said. "And the staff treats you like family; they're concerned for you."

Kim Westmoreland is one of several volunteers who assist with Rock Steady classes, which meet twice weekly.

"It's been even better for me than for them," she said of the rewarding experience.

Gibson added, "We get to see some amazing results. It pulls on your heartstrings. I've had people that have been coming for maybe three months with a cane, and then one day they no longer need the cane. I've had guys tell me, 'I can drive again.'"

Nelson has been taking classes since early January. She credits fellow church members Norman Ford and Toby Lott for telling her about them.

"It was a God thing that I saw them together that morning at church because I was at a loss about what to do to be the best I can be. Now (the Y) has become my next favorite place to be besides my house. I come to five or six Parkinson's classes every week and love them all.

"Has my tremor gone away? No. But I can tell my balance is better. I could fall over a pair of socks on the floor before." The classes, she said, challenge her to use her brain and body together. "We can't afford to baby ourselves."

Parkinson's disease doesn't quit. So Rock Steady Boxing and the Y's other adaptive fitness programs are ongoing, a continuing resource for all the participants. Workouts can be adapted to capabilities.

"One of the coolest things is, because the Y is what it is, we knew it was important to be able to do it for free," Gibson said. "If you're a member of the Y, you have access to all the adaptive classes." Community support and grants make the programs possible.

"Be Rocky!" Gibson called out to Thursday's boxers as the music boomed and everyone followed instructions to lift their gloved hands high in the air, an iconic Rocky Balboa silver screen move. From the beginning, the class pace had been steady and challenging. When the hour was up, everyone had earned the satisfaction of a good workout -- another "round" in their favor in the match against a degenerative disease.

"We are so fortunate and blessed to have this program at the Y," said Kim, after the class. "It has made a huge impact on the people that were in that room today. When I leave, I feel like I have fought my best and that I've done what I can today to battle against Parkinson's. It's a very empowering feeling."