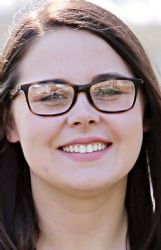 White graduated from EMCC May 4 and plans to attend Mississippi State University over the next two years and hopes then to enroll in the University of Mississippi Medical Center's School of Medicine to obtain a doctorate in family medicine.

In March, White was among 50 students nationwide named a 2019 Coca-Cola Academic Team Silver Scholar and was president of the Eta Upsilon chapter of Phi Theta Kappa on EMCC's Scooba campus. She was named Most Distinguished Chapter President during the Mississippi/Louisiana Region 2019 Awards Gala held March 1-2 at MSU and at the PTK Catalyst 2019 Convention in Orlando, Florida. In February, she was the student recipient of EMCC's HEADWAE award for her academic excellence.

She is the daughter of Johnny and Suzanne White of Kemper County.