Kempker recognized for excellence in teaching 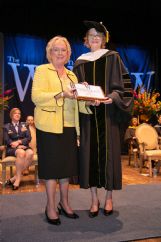 Connie Kossen, left, presents Erin Kempker with the Kossen Faculty Excellence Award at The W's Commencement May 11.
Photo by: Mississippi University for Women

Erin Kempker is invested in the American experience.

Kempker, a professor of history at Mississippi University for Women, would love to engage students in a walk through the annals of time. It's not a chore to survive her class. That's because Kempker is energized to get students excited about civic engagement and the history of the United States, as well as women's history.

"It is a motivating factor in the classroom to use my time really well and to think about whether they're connecting with the material and then how to make it better," Kempker said. On May 11, Kempker's passion for what she does helped her receive the Kossen Faculty Excellence Award at The W's Commencement.

The award, which includes a $5,000 stipend, was established in 2004 by Connie Kossen, a 1964 alumna of The W, and her husband, Tom. The award is based on three fundamentals: excellence in teaching, excellence in scholarly or artistic achievement, and excellence in service, preferably on campus and in communities throughout The W's service area. Kempker, who is the chair of the Department of History, Political Science and Geography, was also The W's Faculty Member of the Year in 2016-17.

"It was a total surprise," Kempker said. "I was really humbled and honored. It's really something to be able to work with colleagues you really respect and like and students that you also enjoy. Getting an award for something you like to do is a pretty awesome thing.

"One of the most important strengths of this university -- and I think there are many -- is that 14:1 student ratio. That is something you absolutely cannot put a price on. That is what allows transformational learning to happen.

"Meeting with students, getting to know them, they get to know each other, we all know each other's names. That just doesn't happen at that many places anymore, but it happens here. It happens every day."

Kempker said apprenticeship is at the heart of the undergraduate -- even the graduate -- experience at The W. She said that is how she learned while studying for her bachelor's degree at Central Missouri State University and while earning her master's degree and her doctorate in history from Purdue University.

Bridget Smith Pieschel, director of The W's Center of Women's Research and Public Policy, nominated Kempker for the award and said her colleague exemplifies the qualities recognized by the Kossen Faculty Excellence Award. Amber Handy, an associate professor of history and director of the Connie & Tom Kossen Center for Teaching & Learning, praised Kempker for her "unwavering commitment" to students.

Kempker said she isn't sure about her next move. She thinks she has another book in her but doesn't know what subject area will fill the void of her initial offering, "Big Sister: Feminism, Conservatism, and Conspiracy in the Heartland," which she said took 10 years to complete.

While Kempker decides on her next focus, her goal will be connecting with students and assisting them on their college journeys. As a first-generation college student, she knows the importance of those relationships and how they are the beauty of The W.

"You don't run a marathon immediately," Kempker said. "You're not going to write 75 minutes (on a final exam) the first time you try, but if you take these smaller steps, and you do this over the course of many weeks, you will get better, and they do. They do get better. It can be done.

"No matter what we do and how we transform, if we stay true to that we will be a place of excellent teaching. That is what I think is the jewel of MUW. It is that relationship. It is knowing one another. It is helping and caring about that person and making them better at what they do over time."