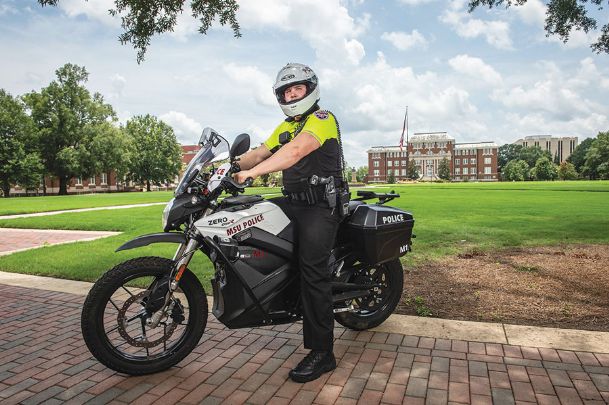 Mississippi State's Police Department is adding a new form of patrol, which will not only enhance campus safety, but also supports sustainability goals.

"These are not little mopeds or chariots, they are full size, enduro type motorcycles with a top speed of over 90 miles per hour and a faster 0-to-60 time than most gas motorcycles," Rice said. He noted one significant advantage is the motorcycles have no exhaust emission or engine noise.

MSUPD has had foot and bike patrol for years, which Rice points to as the most environmentally friendly forms of patrol, but he said these also are limited in range and response time. Rice said the electric motorcycles have a range of over 70 miles per charge and can make traffic stops and respond to any type of call like a regular patrol vehicle, with the only limitation in transporting prisoners.

"The motorcycles will be used on a regular basis throughout the year. I am really excited about the response advantage they will give us during gameday traffic," Rice said.

The motorcycles were purchased from Zero Motorcycles Inc., and have been marked with MSU Police striping. Rice said all patrol riders have been trained and certified.