Where the characters are: Columbus Writers' Group keeps going, growing 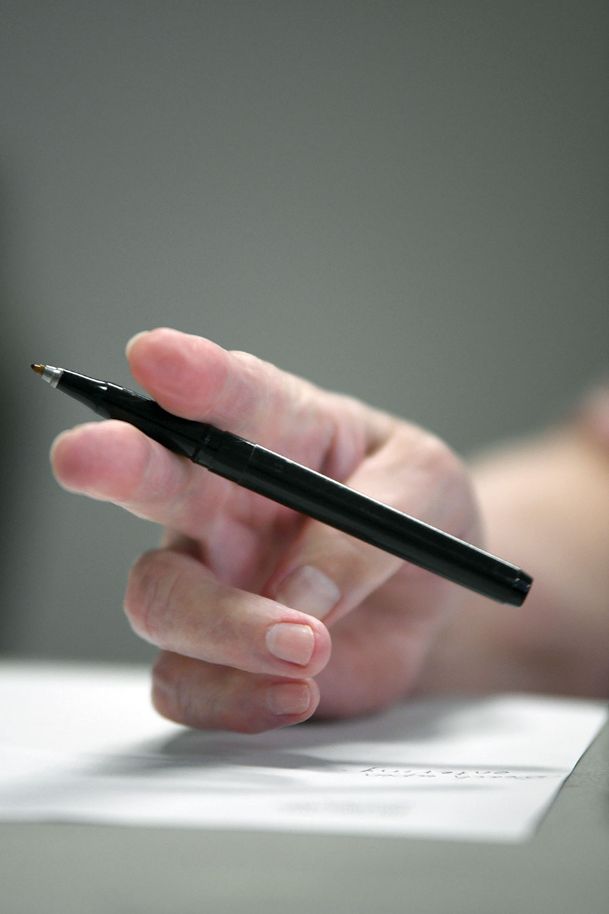 The Columbus Writers' Group meets the second Tuesday of each month at 6 p.m. in the Rosenzweig Arts Center downtown. Whether beginners or advanced, writers share their work aloud with other group members who offer encouragement and critique. The group formed in 2012. Photo by: Jennifer Mosbrucker/Dispatch Staff

Dottie Porter, 81, is trying to get an autobiography of her 60-year nursing career published. As a member of the Columbus Writers' Group, she has shared her work as it progressed with other members to get feedback and editing.
Photo by: Jennifer Mosbrucker/Dispatch Staff

Columbus Writers' Group members listen intently as Dorris Brown reads a short story Tuesday at Rosenzweig Arts Center. Each group member who attends the meeting is asked to bring something they wrote to share.
Photo by: Jennifer Mosbrucker/Dispatch Staff 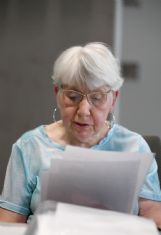 Dorris Brown, 76, reads her short story "Joseph Eagle Wings and Susannah Kincaid" during a Columbus Writers' Group meeting Tuesday. She is known for her detail in both her writing and her group record keeping.
Photo by: Jennifer Mosbrucker/Dispatch Staff

It's 6 p.m. on the second Tuesday of the month. Jeanette Basson is in her usual place.

Sitting at a table in the Rosenzweig Arts Center gallery, her friends start to filter in and take their places, each clutching papers representing their creative efforts over the last 30 days.

When Ron Donaghe arrives, he's carrying a bit more -- a few novels bearing his name on the cover and a thick white folder that he plops on the table in front of Basson.

"I brought you the edits," Donaghe tells Basson. "It was really just a few things."

Basson, 75, plans to self-publish her first novel in the next few weeks and hopes to find quick success selling it through Amazon. She's been working on it for six years, though she admits she only seriously clamped down on the task for the last three or so. With a new round of final edits to her final draft in hand, she's that much closer to the finish line.

"I've written a lot, but I've never been published," Basson said. "It's been the most fun, aggravating, scariest things I've ever done. But I stuck with it and finally finished it."

Without the help she found in the Columbus Writers' Group, Basson's book may still be more of a work in progress.

She and her daughter, Angie Basson, helped form the group in 2012 as a way to share their work with a close-knit community of fellow writers, whether beginners or more advanced. Each second Tuesday at the RAC, the now dozen or so members of the group read their works aloud for peer critique.

"We just became a group of friends," said Angie. "We try to be as gentle as we can but also be honest with each other. ... I enjoy writing and getting feedback from others."

Every member has a niche

Dorris Brown had the floor. Her short story of the star-crossed love between Choctaw Joseph Eagle Wings and Susannah Kincaid held her audience in attentive silence.

The story is Brown's contribution to the writers' group's latest project "The Ferry Tales," a fictional short story collection centered on life in early 19th century Columbus. Each writer looked at a random vintage photograph and concocted a tale inspired by its content.

In Brown's story, the details jumped out -- from the stars, the rushing Tombigbee River and torn flesh from an injury to suspense, heartache and loss.

Whether in Brown's writing or in her daily life, details are kind of her thing.

Brown, 76, a retired international marketing director, became the de facto organizer/minute-taker for the writers' group after it was founded. She's asked before if those duties should be rotated, but they've so far stayed in Brown's court since her friends say "you're doing such a good job."

"Wherever I've been in my life, these things just fall to me," Brown said.

With the writers' group, though, everyone seems to have their niche.

Donna Both, for example, is known best for her poetry, while Debra Doonan focuses her writing on mystery. Dick Martin is writing a scientific work on energy sources.

Angie Basson, well, she just tells one heck of a story.

"When Angie reads here or gets behind (an open) mic, I just fall over laughing at how entertaining her stories are," Brown said.

Then there's Donaghe, dubbed "The Red Pen Man" for his thorough edits of manuscripts members hope to get published.

At 71, Donaghe has enjoyed a 35-year writing career, with traditional publishing houses -- New York-based Penguin Random House among them -- printing more than a dozen of his novels since the mid-1980s. Since 1997, he's self-published several more.

Donaghe moved to Columbus in 2016 and soon found his way among the writers' group, offering his comments to the recreational writers and his editing services to those who are "more serious."

"It's becoming less and less possible to get published by traditional publishers, so I've paid my dues and have joined the ranks of so many writers who don't want to play the traditional publishing game," he said. "The key to (self-publishing) is to put out excellent covers, make sure the writing is well-edited, and if it's any good, people will read it."

"She can make your mouth water describing what her characters are having for dinner," he said. "She's just so concrete in her storytelling."

Jeanette's storytelling came straight from her mother, who never wrote anything for publication but "had wonderful story ideas."

Over time, Jeanette dabbled in several artistic endeavors -- painting, basket weaving and other types of handcrafting -- but she kept coming back to writing.

"I would do whatever caught my fancy, but nothing holds it like writing," she said. "Characters and stories just come to me. I wake up at night with characters in my head, and I have to get them on paper to get them out of my head."

Dottie Porter was recovering from a stroke six years ago when she came across a book that gave her inspiration.

It was an autobiography of 81-year-old cellist who spent her teenage years working at Tiffany's.

Another year passed before Porter's hands worked well enough to type on a keyboard. Once that process started, though, she said the book "just rolled out chapter after chapter."

Now 81 herself, Porter has hired an agent and is seeking traditional publishing for manuscript "Out from under the Bedpan and into Cyberspace Nursing" -- a recounting of her 60-year nursing career that took her from conventional nursing in the Jackson area to becoming a licensed feel and touch practitioner in 2000.

"A lot of it talks about how the use of technology changed over time," she said. "That's (the introduction of) computers, of course, but also the use of plastic. We used to have glass thermometers and we would (heat) needles and use them over again. I remember cold stainless steel bedpans that were difficult to slide under heavy people, especially. The plastic ones are so easy."

Porter came to Columbus in 2008 and ran a touch therapy clinic for a few years before changing her license status to inactive. She joined the writers' group two years ago after meeting Angie Basson and Donaghe.

Active in a ministry that visits Lowndes County Adult Detention Center's female inmates, Porter already is working on two faith-based books, "Meditations and Prayers from Psalms 23" and "Get Out of Jail Free," the latter of which will focus on forgiveness and spiritual freedom.

Some of the inmates are even getting involved with the project.

"For the (Psalms 23) book, I have artists in my family who are drawing pictures to go with each verse," she said. "But four of the girls at the jail have given me things, too, and they are some of the most beautiful pictures you'll ever see."

In college, which she jokingly noted was "about a thousand years ago," Brown was tasked with looking out a classroom window and writing what she saw. After she turned in the assignment, the dean called her to his office.

Her work, especially the detail, earned the dean's attention, she learned. So far, it's the only time she's been published.

Through the writers' group, she said she wouldn't mind one day seeing her work broadly shared. But that's not the reason she joined.

"The creative process, the journey, means more to me," Brown said. "It's about drawing the reader into a story to be right where the characters are.

"I also want to help young writers, at whatever level they are, and just encourage them to write," she added.

Brown's two elementary-aged granddaughters in San Francisco are only privy to her most important work.

"I send poems and stories to them all the time," she said. "For (one granddaughter's) birthday, I sent her a story about her going to Mars and having a birthday party there."

2. Let us entertain you: Storytelling festival sparks imagination, laughter and maybe even a tear or two ENTERTAINMENT

4. The W's MFA in Theatre Education has a long reach COMMUNITY

5. Community Calendar for the week of February 16, 2020 ENTERTAINMENT