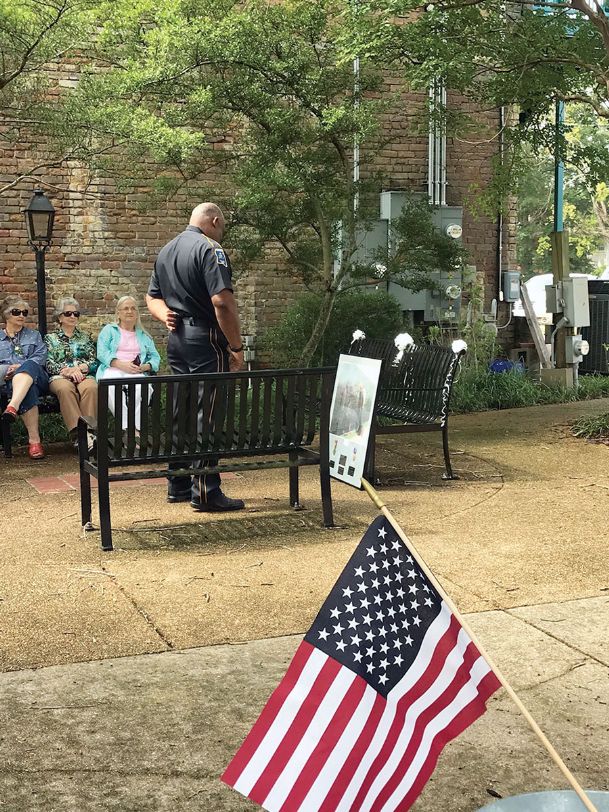 Johnny Buster's memory and story will live on next to his late son's in downtown Columbus.

In early January, Buster passed away at 72 leaving a legacy of dedication to the military, his family and the citizens he protected. After months of grieving, Buster's wife, Patsy, knew she wanted his memory preserved alongside that of their late son, Benji Livingston. Four years ago, Patsy and Johnny dedicated a bench together in honor of Livingston at Leadership Plaza downtown. This month, Patsy did the same for her loving husband of 20 years with her family and Johnny's friends by her side.

"It means a lot," Patsy said. "A lot of family and friends go out there and send us pictures and notes just let us know they are thinking of (Benji). ... After I did that for Benji and it meant so much to me, I wanted to do that for him. I wanted to remember him in such a special way because he was such a special person."

Johnny had a life of service, earning a Purple Heart with the U.S. Air Force while serving in the Vietnam War. After retiring from the Air Force after 22 years, he continued serving the public as an Aberdeen police officer for nearly 20 years before retiring in 2007. Helping those in need was simply a part of who Johnny was.

"He was a really good person and was always good about doing things for people who couldn't help themselves," Patsy said. "When he worked for the Aberdeen Police Department, he was patroling and this elderly lady didn't have air conditioner or anything and he went and got her a fan with his own money. ... There was also a guy coming through driving to Florida for work and he didn't have any money. (Johnny) gave the guy his last $20 because he wanted him to be sure he had meals on the way down there."

To Aberdeen Assistant Police Chief Quinell Shumpert, that was the norm for his friend Johnny. Earlier this month, Shumpert attended the bench dedication to show Patsy and her family support and share the love he had for "Johnny B."

"Everybody here is proud of it," Shumpert said. "Johnny was a good person. He would give you the shirt off his back if you needed him to. You just can't beat him. ... He'd do it, you didn't even have to ask him."

Shumpert remembers Johnny as an avid Dallas Cowboys fan, but even more than his beloved football team he said Johnny loved people.

"We had another officer here really into martial arts," Shumpert said. "He wanted to go to a competition in Australia and he was raising money. Johnny was a big Cowboys fan and he had a bunch of memorabilia. He brought all that up here and gave it to him to sell and the officer was able to go.